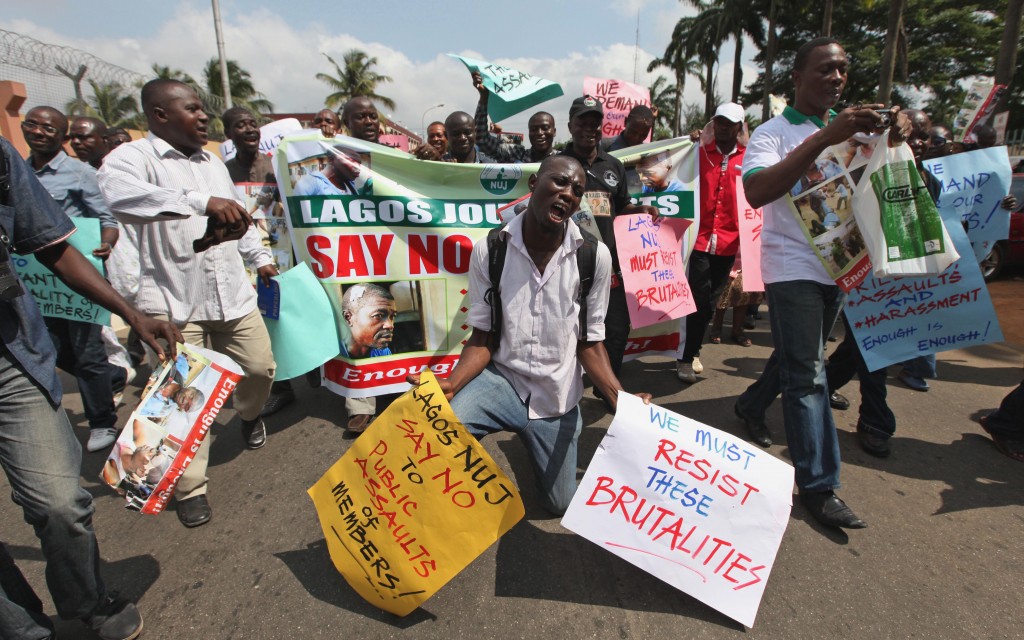 Journalists protest against brutality in the course of doing their job after photo journalist Benedict Uwalaka was beaten up in Lagos, Nigeria, Thursday, Aug.16, 2012. About a hundred journalists have protested the violence they face doing their jobs after a photojournalist was hurt on assignment in Nigerias commercial capital. Benedict Uwalaka said he had been attacked several times before the Aug. 9 incident that spurred Thursdays protest in Lagos. (AP Photo/Sunday Alamba)

A Nigerian radio journalist has been threatened after reporting on an alleged rape case at a boy’s school in Kano, the Nigeria's second-largest city.

Nasir Salisu Zango reported that three men visited his house early in the morning on Oct. 29. Dressed in civilian clothes, the men claimed to be police officers and asked Zango to stop his coverage of sexual assaults on boys in Hassan Ibrahim Gwarzo Secondary School, according to the Committee to Protect Journalists. There would be "consequences" if Zango did not stop reporting, but the men did not elaborate, according to Zango.

Zango is a journalist for the privately-owned station Freedom Radio and the German broadcaster, Deutsche Welle. "India Ranka," a Hausa-language program of Freedom Radio broadcast, aired Zanga's interview with a boy who was receiving treatment in a hospital after the boy said he was raped at school.

The 13-year-old said an unknown person forcefully and repeatedly had sex with him in his dorm at night. Several other new students also reported being assaulted. Zango also interviewed the boy's mother who said school authorities were preventing several other boys from seeking medical help outside the school.

Nigerian officials closed school on Oct. 30 and police are investigating the boy's claims, according to Vanguard, a daily newspaper in Nigeria. Ibrahim Ayagi, the school's proprietor, denied the allegations saying they were "clear mischief to rubbish the image of the school."

Even though Zango's life could be in danger for continuing to report on this story, he said he was not afraid of the threats and would continue to do a follow-up to his first report, according to CPJ.