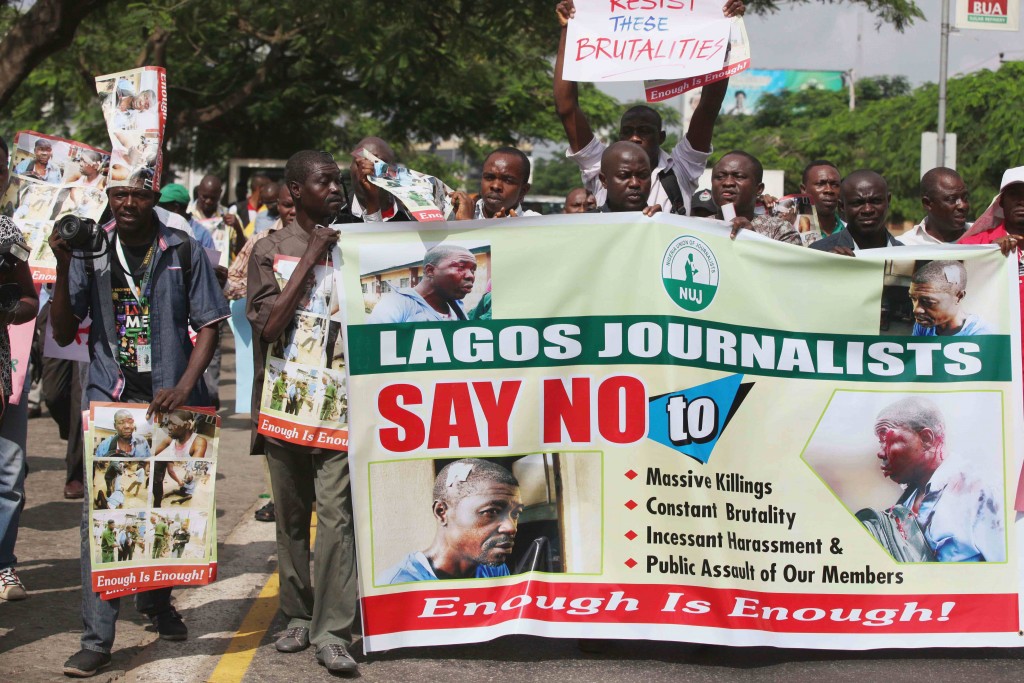 Journalists protest against brutality in the course of doing their job after photo journalist Benedict Uwalaka was beaten up in Lagos, Nigeria, Thursday, Aug.16, 2012. About a hundred journalists have protested the violence they face doing their jobs after a photojournalist was hurt on assignment in Nigeria’s commercial capital. Benedict Uwalaka said he had been attacked several times before the Aug. 9 incident that spurred Thursday’s protest in Lagos. (AP Photo/Sunday Alamba)

A Nigerian journalist was beaten by prison officials outside a court after taking pictures of suspects in a murder case.

Emmanuel Elebeke, a reporter for Nigeria's Vanguard newspaper, was taking photographs Nov. 12 of six suspects in a murder case on the premises of the Federal Capital Territory High Court in the Maitama District of Abuja, according to Vanguard, a daily based in Lagos.

Prison officials asked Elebeke to hand over his camera. When he refused to do so, they started beating him up. According to Vanguard, Elebeke was handcuffed by one prison official and hit by another with the butt of his gun.

Elebeke suffered injures on both his legs and other parts of his body.

The prison officers insisted Elebeke had no right to take pictures of the suspects on court grounds and refused to return the camera. They said Elebeke’s camera would remain as an “exhibit,” according to the report.

In August 2015, several Nigerian journalists were barred from entering a courthouse to cover court proceedings in Lagos state by armed police officers, according to the Committee to Protect Journalists. In four separate incidents over one week in June, four journalists were beaten, and one of them — Joseph Hir — had to flee the Nigerian state he lived in.

A report filed by the International Press Center in Lagos documented 21 cases of journalists being attacked in the period of November to December 2014. Of the 21 attacks, police officers were the attackers in four of the cases.

Nigeria's press  is ranked as "partly free" in Freedom House's 2015 country report. The country is ranked 111 out of 180 countries on the 2015 World Press Freedom Index.

Correction: Due to an editing error, an earlier version of this story said the beating occurred Nov. 10.