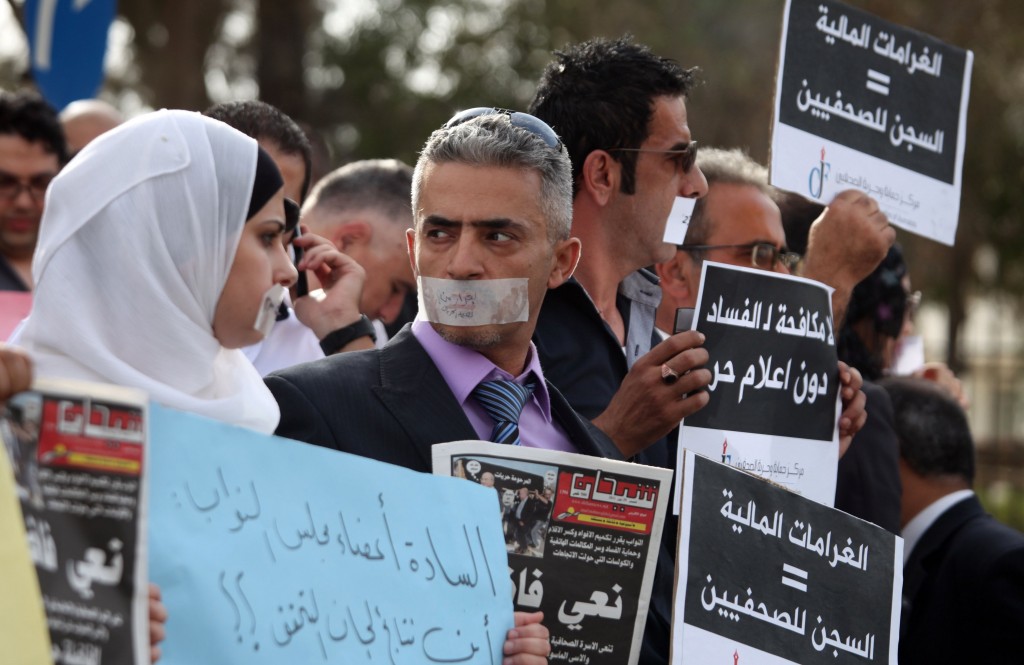 FILE -- In this Thursday Sept. 29, 2011 file photo, Jordanian journalists protest in front the Jordanian House of Parliament, symbolically wearing tape over their mouths, as they protest over proposed changes to the anti-corruption law they believe will muzzle press freedoms, in Amman, Jordan. Jordan’s prime minister Abdullah Ensour told a meeting of the Geneva-based International Press Institute (IPI) that Jordan has “come a long way” in improving both legislation governing press freedoms and the standards of a national media still reeling under long years of state censorship. Nidal Mansour, head of the Amman-based Center for Defending Freedom of Journalists --IPI’s hosting partner -- said that the press law enacted last year was designed to muzzle press freedoms. (AP Photo/Mohammad Hannon, File)

A Jordanian TV anchor arrested over a Facebook post has been released from jail after a week behind bars.

Tareq Abu al-Ragheb, who works for Al-Haqiqah International, a privately-owned satellite channel, was arrested Nov. 3 and detained for an unspecified post the authorities considered "non-objective and full of libel and slander," according to The Jordan Times. A video on Facebook posted Nov. 10 showed him thanking colleagues in the media and in law who aided in his release.

Based on the penal code, defamation is a crime, and defamation of public and government officials carries a maximum fine of $14,000 (10,000 Jordanian dinars) and a jail sentence of three months to a year, according to Freedom House. Article 37 of Jordan's penal code also prohibits journalists from printing anything that could "harm" national unity.

One post that may have led to al-Ragheb's arrest included criticism of Arab governments and their failure to aid the Palestinians, the Committee to Protect Journalists said, citing a person it didn't identify.

Al-Ragheb is not the only journalist to be arrested for defamation in Jordan recently. Osama al-Ramini, chief editor of the al-Balad, news website was detained Oct. 20 and released on bail the next day.

Al-Ramini faced a lawsuit  for the publication of an article that was also deemed "non-objective and full of slander" by Jordanian authorities, according to The Jordan Times.

Although Jordan's press law does not allow for the detention of journalists for their work, authorities use a provision in the country's electronic crimes law to detain journalists, according to The World Post.