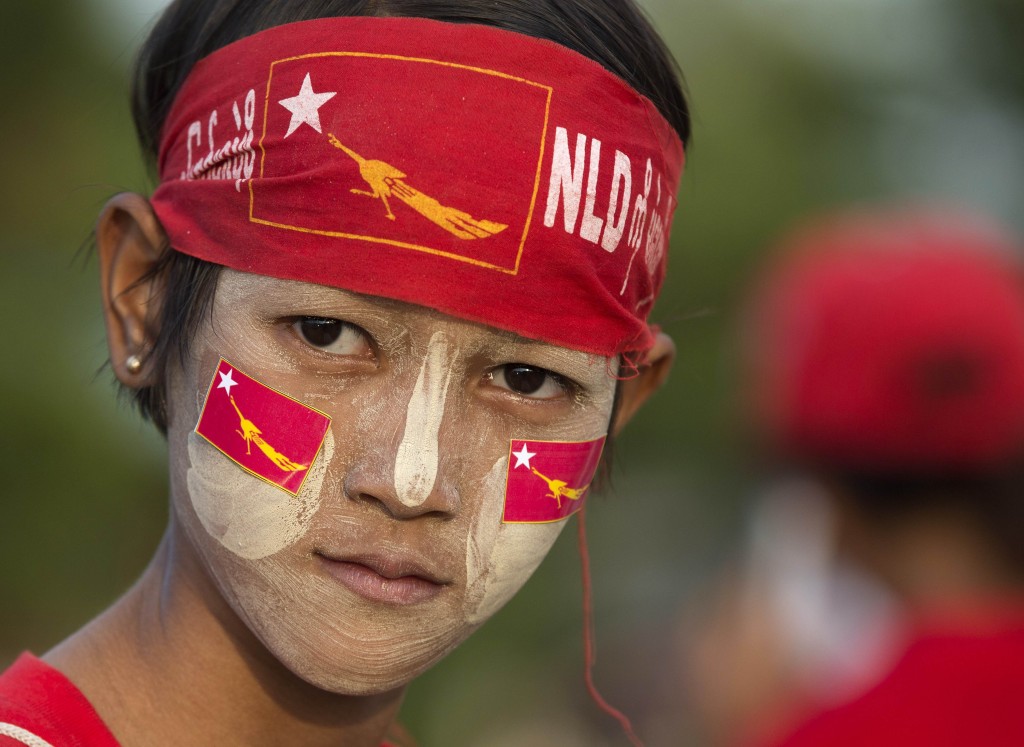 A young supporter of Myanmar opposition leader Aung San Suu Kyi's National League for Democracy party prepares for a party to celebrate the final day of campaigning in Yangon, Myanmar, Thursday, Nov. 5, 2015. On Sunday Myanmar will hold what is being viewed as the country's best chance for a free and credible election in a quarter of a century. (AP Photo/Mark Baker)

An explainer on Myanmar's Nov. 8 elections

After a half-century of military rule, Myanmar's election Nov. 8 is a key milestone in the country's transition towards democracy. The poll comes 25 years after the opposition leader Aung San Suu Kyi's National League for Democracy won a landslide victory in 1990 elections, only to have the military annul the poll and arrest opposition leaders.

Below, an explanation of key questions as people in the southeast Asian nation prepare to vote:

How fair will the election be?

In 1990, the NLD defeated the military's National Unity Party by a wide margin–only to see Suu Kyi placed under house arrest for 15 of the next 20 years and the junta tighten its grip. With Suu Kyi still under arrest, the NLD boycotted 2010 elections that came as Myanmar began its transition to civilian rule–ensuring a victory for the junta-linked Union Solidarity and Development Party. In 2012, Myanmar held by-elections to fill 46 vacant seats in the country's 440-member parliament. With Suu Kyi freed, the NLD ran and won 43 of 44 contested seats. President Thein Sein, a former general, accepted the USDP's defeat and allowed the NLD to enter parliament.

However even if the NLD wins a majority of the contested seats in this election, it may not win control of parliament. That's because Myanmar's constitution reserves 25 percent of parliament for appointees of the military. Further, no matter what happens Suu Kyi will not become president. Myanmar’s constitution bars anyone with a spouse or children who hold foreign passports – and Suu Kyi's children both have British passports. Even though Suu Kyi can't be president, she's said that if the NLD wins, as leader of the party she will be "above president" and exert ultimate authority over the government.

Further, the country's mainly Muslim Rohingya minority will not have the right to vote as the government doesn't recognize them as citizens. In addition, Suu Kyi herself has been criticized for failing to defend the rights of the Rohingya.  There also have been reports that the government has arrested people in advance of the election for posting critical or satirical content about the army.

Still, there is room for optimism, says Priscilla Clapp, the U.S. State Department's chief of mission to Myanmar from 1999 to 2002. "There is a lot of transparency in this election that just didn't exist before," says Clapp, who is now a senior adviser at the U.S. Institute of Peace. "And the rules have been worked out with public participation. A lot of precedent is being set here."

How is China viewing elections on its southern border?

During its decades of isolation, Myanmar's most important relationship was with China, the country's largest trading partner and the source of more than 40 percent of its foreign investment since 1998. China's economic lifeline to Myanmar was probably the most important factor that helped it survive Western sanctions during the junta's rule, according to a 2007 report from the Congressional Research Service.

Earlier this year, the two governments completed a 479-mile (771 km) oil and gas pipeline connecting China's Yunnan province with the Bay of Bengal.  China is also concerned about stability in northern Myanmar, where Myanmar's army has fought periodic battles with various rebel groups, including Chinese-speaking Kokang rebels seeking greater autonomy. In March fighting spilled across the border into China, which has also been the destination for thousands of Kokang civilians fleeing the fighting. Myanmar has made steps to de-escalate the conflicts near the Chinese border. In October, it signed a peace agreement with seven of 11 rebel factions in the country.

Given China's historic support for Myanmar's junta, the move towards multiparty democracy on its southern borders is awkward for its Communist leaders. However China has been trying to hedge its bets, and invited Suu Kyi to Beijing to meet with President Xi Jinping in June. How influential has U.S. diplomacy been?

Myanmar's transition away from military rule has been a focus of U.S. diplomacy in southeast Asia. President Obama has visited Myanmar twice – the same number of trips as he's made to Canada – and also hosted President Sein at the White House. Obama has also met multiple times with Suu Kyi, and former secretary of state Hillary Clinton made two trips to Myanmar during her tenure.

In 2012, Obama nominated the first U.S. ambassador to the country since the crackdown that followed the 1990 elections. The U.S. has also begun easing economic sanctions on the country, and U.S. brands such as Coca-Cola and Apple are now common in the country. The moves, says Clapp, have not only pushed forward Myanmar's transition but given the U.S. greater influence in southeast Asia.

Will press freedom improve after the elections?

Media repression is still a serious problem in the country, despite a number of reforms aimed at ending censorship in 2012. The country is ranked among the ten most censored in the world by the Committee to Protect Journalists. An Amnesty International report in June said that at least 10 media workers were in jail, and the government has not prosecuted anyone for the October 2014 death of freelance reporter Aung Kyaw Naing, who was shot in military custody.

How that changes remains to be seen. Human rights groups say that after opening up to independent media in 2011, the government reversed course and began increasing restrictions in 2014 and 2015. Even if the opposition wins the election, it's not clear to what extent civilians will be able to exert authority over the security forces. Under Myanmar's constitution, the commander-in-chief of the armed forces retains ultimate control over the military–not the president. That means journalists may still be cautious in reporting on the army.

"The government, they say 'we have stopped censorship', to a certain extent it’s true,” says Maureen Aung-Thwin, director of the Burma Program at the Open Society Foundations. "In one sense, they don’t have the rules they used to have for reporters for publishing. On the other hand, for the local press especially, there is still quite a bit of self-censorship.”