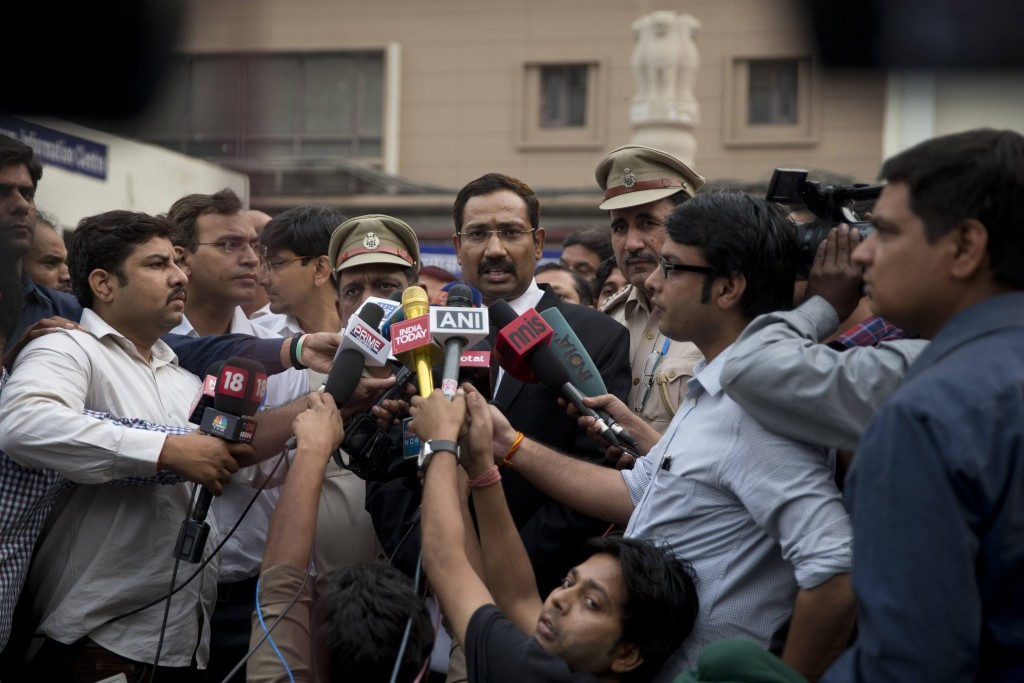 "Media in India is not as free as it used to be."

BBC World correspondent Zubair Ahmed has covered protests, communal violence and many other sensitive issues on the Indian subcontinent. After 25 years as a reporter, he sees press freedom in India declining amid  pressure from commercial interests, increased religious sensitivities and Hindu nationalist Prime Minister Narendra Modi's intolerance of criticism. Six reporters have been killed in India this year, according to the International Federation of Journalists. That includes Jagendra Singh, a freelance reporter who was doused with kerosene and lit on fire by local police officers, apparently in retaliation for his reporting on corruption and illegal mining in the state of Uttar Pradesh.

Ahmed spoke with Global Journalist's Erjun Peng about the challenges of reporting in the world's largest democracy and threats against local reporters like Singh.

Global Journalist: How do you see press freedom in India changing?

Ahmed: I became a journalist nearly 25 years ago and I joined a newspaper called The Times of India. It was quite influential at that time [and] it's still a very important newspaper in India. I heard from a journalist at the newspaper that there are instances of interfering by the management and also the owner. And that was not the case when I was with The Times of India. I joined the BBC nearly 20 years ago. I don't know what is happening now, why this is changing, but the fact is that media in India is not as free as it used to be.

GJ: What are the reasons for this change?

Ahmed: One of the reasons, as I see it, could be that all big media houses today are owned by industries. Industries have their own agendas, a lot of them are very close to the regime. So they have a lot of pressure from the regime, I suppose.

Nearly two months ago I was in the western Indian state of Gujarat. There was a protest by a particular community...against the state government. It was totally blocked out, nothing came out from Gujarat. I met local journalists who told me their owners had told them not to cover news of protest.

Ahmed: Several national media were allowed to cover the protest. But the state media, the local media, were completely blocked out and also the social media. So it's very difficult to find stories in Gujarat at that point of time because the Internet was down, you couldn't find stories on social media, on Twitter and Facebook. You couldn't email stories to your office, so you [would] just call the office and dictate stories on the phone.

GJ: What other difficulties to journalists face?

Ahmed: It’s very difficult for local journalists to earn enough money to look after their families. I learned that lot of journalists are not on payroll of the newspaper or news channels that they are working for. So they are basically freelancers.

They don't get enough money. For one newspaper story carried in a national daily they don’t get more than [U.S.] $5. If it is a TV piece, news piece, they can get about $15. So the wages are low. Financially, they are facing many hardships, so it’s very easy for the administration to manipulate them. GJ: Prime Minister Modi's government accused three TV networks of broadcasting regulations earlier this year after they aired criticism of the execution of a man convicted of terrorism. How did journalists react?

Ahmed: These notices have raised eyebrows among journalists in Delhi. They have not been very happy with this, and they felt that perhaps this might be a kind of attempt by Mr. Modi's government to start some kind of censorship. I don't know what is going to happen, but it's obvious this is unwelcome and people don't like it. Right now, many journalists are protesting not just [this] but also other things. It seems that many journalists [have] said since Mr. Modi has come into power in 2014, the level of society has gone down. This regime doesn't want any criticism against it.

GJ: Beyond the government, what other threats to journalists face?

Ahmed: When it comes to religion, of course it is a very sensitive issue in India and it's becoming more and more sensitive under Mr. Modi's regime. But even now, I would say it's not so bad. As a Muslim, I can go and cover Hindu-Muslim clashes easily. I just don't have to be stupid, I have to be careful. But I think I can still do my job, though some of my colleagues are saying that very soon a day might come when it will become very difficult for journalists to cover protests or religious issues–especially if you happen to be from other communities.

GJ: How do you see the situation for the media changing in the future?

Ahmed: There will be problems here, but largely it’s a free country, [a] free press. There are stresses right now, there are problems right now, but...When Ms. [Indira] Gandhi was prime minister [in the 1970s] she employed the state of emergency, seizing all human rights and press rights and individual rights. In two years, Indian media were totally silent.

But even during that period, there were Indian editors and journalists who fought against Ms. Gandhi, fought against the censorship. And it became free again after 1977 when Ms. Gandhi lost the election very badly. There is a lesson for other governments. You don't interfere [with] the freedom of press, because you are going to be unsuccessful. You may succeed for a bit....[but] eventually you cannot suppress the freedom of the press.