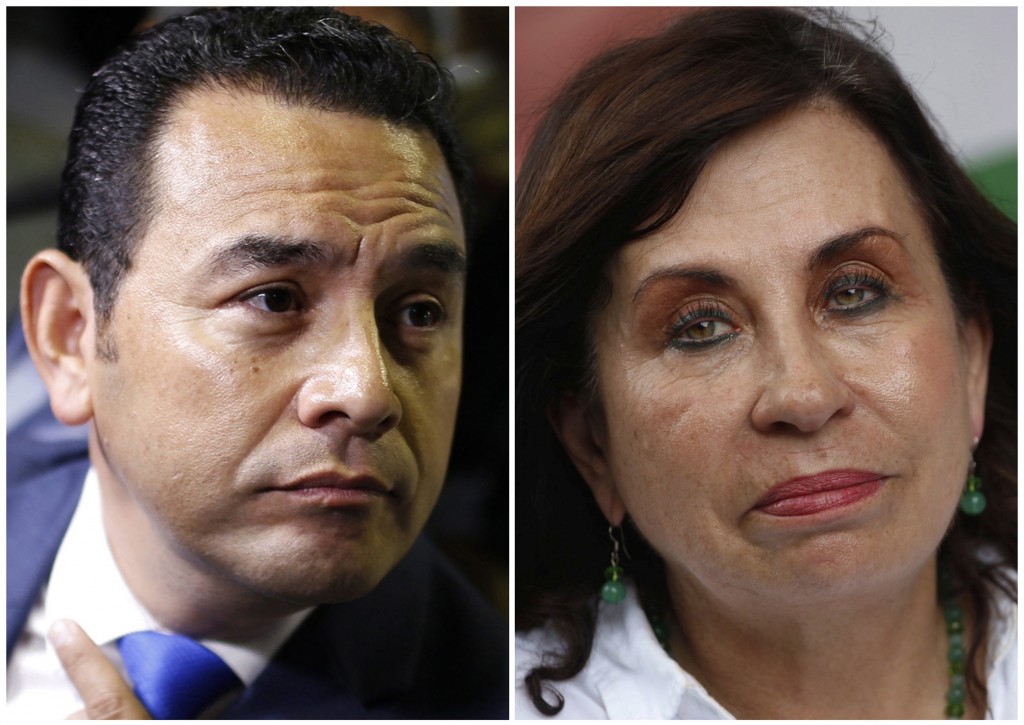 After corruption protests topple a president, Guatemalans are looking for change

Voters in Guatemala will choose a new president Sunday, and the vote comes at a turning point in the Central American nation's history.

Much of the country's political establishment has been discredited by a corruption investigation into customs duties that has led to charges against former president Otto Pérez Molina, former vice president Roxanna Baldetti and dozens of others. Molina stepped down in September after the legislature voted to strip him of immunity after months of mass demonstrations.

"Having come from a year of political turmoil and crisis, there’s a great deal of desire from the public to end corruption and to make particular reforms,” says Orlando J. Pérez, a professor at Millersville University in Pennsylvania.

More than 70 percent of Guatemalans turned out to vote in the first round of elections in September. From a slate of 14 candidates, former television comic Jimmy Morales topped the poll with 24 percent of the vote, while Sandra Torres, a former first lady, came in second with 20 percent. The two now face-off in Sunday's run-off.

Morales, 46, is famous in Guatemala for starring in a comedic TV series titled “Moralejas,” where he and his brother Sammy variously play farmers, gangsters and alcoholics. Like Trump, Morales is running as a political outsider and has no experience in politics save for a failed bid for a municipal post in 2011. But in this year's election, his lack of experience is one of his main advantages. He's running under the slogan "not corrupt, not a thief."

"I think he was able to capitalize on the discontent that a lot of people have with the political establishment," says Mike McDonald, a Guatemala-based correspondent for Bloomberg News, in an interview with Global Journalist.

Morales has called himself a "nationalist" and draws much of his support from Guatemala's urban centers. However despite is anti-establishment appeal, the party behind Morales, the National Convergence Front, is hardly revolutionary. It was created by former military officers, some of whom have been accused of involvement in human rights crimes during Guatemala's civil war in the 1980s and 1990s.

"The team that Jimmy Morales has behind [him], they are the Jurassic military, so that's why there will be a problem of repression as it is the only way they can see things," says Helen Mack Chang, a Guatemalan human rights activist.

Morales, whom opinion polls show is the front runner, has sought to down play that link. In a Spanish language interview, Morales said he has no contact or relationship with those military officers. He also wrote on his website that when he was leader of the party in 2013, 99 percent of its leadership was replaced by political outsiders.

"For 20 years I've made you laugh, I promise that if I become president I won't make you cry," he told voters during the campaign, according to Agence France-Presse.

Torres, 59, was first lady of Guatemala from 2008 to 2011. She had hoped to replace her then husband, former president Álvaro Colom in 2011 but was barred by a Guatemalan law forbidding presidential relatives from running for office. In order to be on the ballot this year, Torres divorced Colom.

While her former husband was in office, Torres was Guatemala's commissioner of social cohesion, a post that allowed her to oversee social programs for about 470,000 poor Guatemalans in the countryside. The largest of these programs gave monthly stipends of about $37.50 – and her role in supervising the program has led to accusations that it was used for vote-buying and political patronage.

“There’s a lot of speculation that her family benefited personally from those subsid[ies]... and that she used them in a corrupt way to promote her candidacy,” says Pérez.

Torres draws support from the center-left and from the countryside, given her background in rural assistance programs. "I define myself as a social democrat," she said in September, according to the Wall Street Journal. "I believe in social justice."

And addressing Guatemala's the fallout from the customs scandal is just one problem the new president will have to address. The country is also beset by yawning economic inequality and frightful levels of violent crime linked to drug trafficking.

"The new government is going to have a very short honeymoon," says Pérez.

with reporting by Ilenia Caia