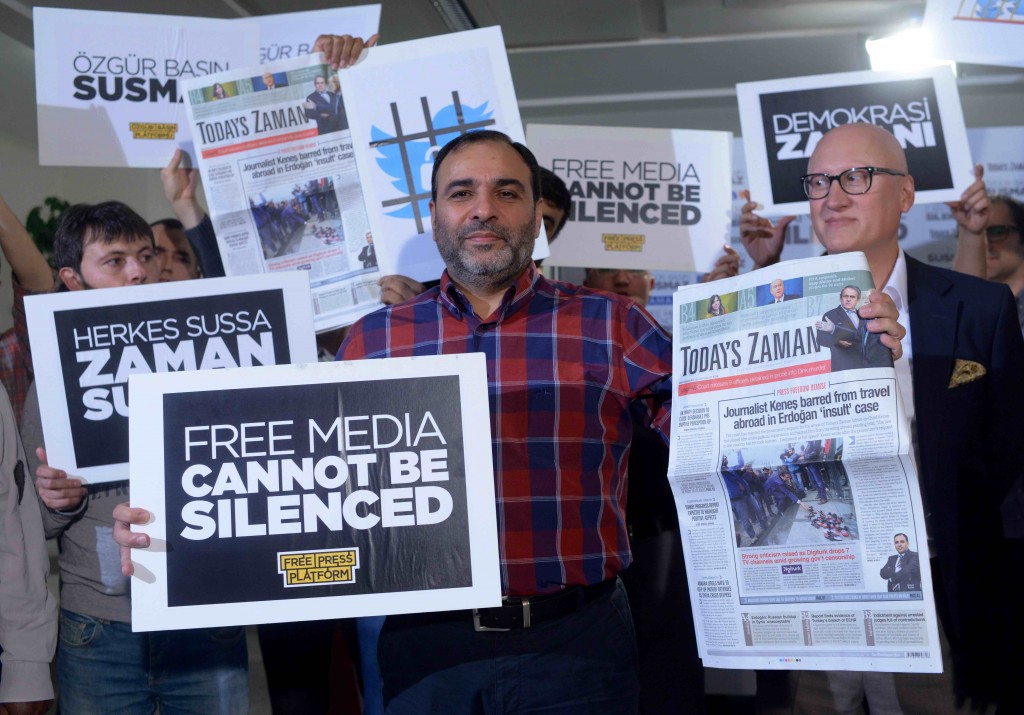 Bulent Kenes, editor-in-chief of Today's Zaman, shows his newspaper minutes before police detain him in his office in Istanbul, Turkey, late Friday, Oct. 9, 2015. Police have detained the chief editor of opposition English-language newspaper for posting a series of tweets critical of President Recep Tayyip Erdogan. Kenes was taken away from the newspaper's headquarters in Istanbul on Friday, as several supporters chanted: "Free media cannot be silenced!" The detention was televised live.(AP Photo/Isa Simsek, Zaman)

A Turkish court has arrested the editor-in-chief of a daily newspaper and charged him with insulting the Turkish president.

Today’s Zaman Editor-in-Chief Bülent Keneş was arrested Oct. 10 after being detained Oct. 9. The journalist was detained for hours, released and then arrested in front of the daily’s headquarters in Istanbul on live television. Today's Zaman is seen as sympathetic to U.S.-based cleric Fettuleh Gulen, and is often critical of the government.

Kenes was taken into custody on charges of insulting Turkey’s President Recep Tayyip Erdoğan based on a series of tweets critical of Erdoğan.

Keneş is accused of violating Article 299 of the Turkish Penal Code (TCK), which punishes insulting the president with prison terms of one to four years, according to Today’s Zaman. "The penalty to be imposed shall be increased by one sixth if the offense is committed publicly; and by one third if it is committed by way of press and media," according to the text of the penal code.

The arrest came amid continuing political tension in Turkey ahead of Nov. 1 elections. Over 100 people died in bomb attacks Oct. 10 targeting a peace rally in the capital Ankara. The government has suggested that the Islamic State (ISIL), radical leftists or Kurdish militants are behind the attack. Thousands of Turks took to the streets Oct. 11 to protest the attack, with many blaming the government for failing to protect its people, The Guardian said.

This is not the first time Kenes' has been arrested on similar charges. In June, the journalist was given a 21-month suspended jail sentence over a tweet he posted in July 2014 according to The Telegraph.

In another instance, the editor-in-chief of another daily newspaper was arrested and accused of insulting Erdogan, "violating his personal rights."

Turkey made headlines in 2012 and 2013 for being the world’s worst jailer of journalists according to the Committee to Protect Journalists. As of December 2014, the country had seven journalists in its prisons. The country currently ranks 149 of 180 countries in Reporters Without Borders'  2015 World Press Freedom Index.