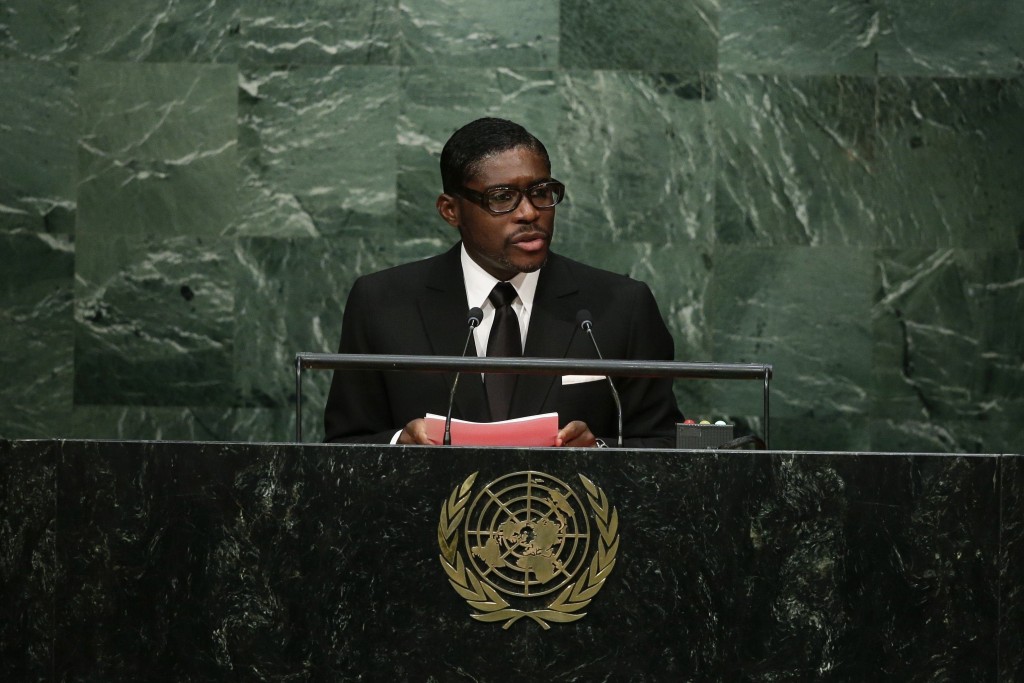 Teodorín Obiang giving a speech as Minister of Agriculture in 2010. (Creative Commons/Embassy of EG)

All of these were amassed by Second Vice President Teodoro Nguema Obiang, or Teodorín, the 43-year-old son of the president of the oil-rich West African nation of Equatorial Guinea.  The younger Obiang's spendthrift habits have attracted not only the attention of tabloid photographers but also prosecutors outside the country who have accused him of money laundering and looting the oil and timber wealth of a country where many people live on less than $1.25 per day.

Below, five things to know about the man who addressed the UN General Assembly Sept. 30:

1. A U.S. oil company paid his college tuition and expenses.

According to a complaint by the U.S. Justice Department, an American company called Walter Oil & Gas Corp. not only paid Teodorín's tuition during his five months of study at Pepperdine University in 1991, it also paid for rooms for him at the Beverly Wilshire Hotel and a Malibu house rental. The company was an early investor in Equatorial Guinea's Alba gas field.

2. His father made him a cabinet minister at age 30. In hindsight, it's not all that surprising that Teodorín became the country's minister of forestry and agriculture at such a young age. His younger brother, Gabriel Mbaga Obiang, is the minister of mines, industry and energy. In 2007, the journal Afrique Education reported that 21 of the country's 50 ministers were close family members of President Obiang.

3. He's enriched a lot of lawyers.

That's because Teodorín has been the subject of money-laundering investigations in the U.S., France and at least two other countries. Meanwhile, three Russians are in jail on a Spanish arrest warrant on charges of laundering cash for the Obiang family, according to media reports.

In the U.S. the Justice Department accused Teodorín of looting his country's resource wealth and spending $315 million on luxury goods and real estate between 2004 and 2011. Under a settlement last year, Teodorín agreed to sell a $30 million mansion in Malibu, a Ferrari,

and part of his extensive collection of Michael Jackson memorabilia. The proceeds are supposed to be used for charity and development projects in Equatorial Guinea.

Additionally the French government seized Teodorín's 101-room mansion in Paris and a fleet of sports cars in 2012 as part of an investigation into his father. In 2014 he was again placed under formal investigation for money-laundering.

4. He may be Michael Jackson's biggest fan.

Teodorín had a $3.2 million collection of Michael Jakson’s memorabilia, according to the Justice Department. That included the crystal-encrusted glove from Jackson’s 1986 Bad Tour, a “Thriller” jacket, platinum record albums and seven life-size statues of the singer.

5. He knows how to throw a good party.

After Teodorín went to Carnival in Rio de Janeiro, where Equatorial Guinea sponsored a champion samba-dancing troupe, the dance group came under investigation on money laundering charges, according to Bloomberg News. In South Africa in 2005, he went on a 10 million rand ($1.5 million at the time) shopping spree, acquiring a Lamborghini and two Bentleys, according to South Africa's Independent. The same year, Teodorín reportedly spent $700,000 to rent a 303-foot yacht in the Caribbean to woo the rapper Eve. More recently, he's dated former Ms. Denmark Christina Mikkelsen.