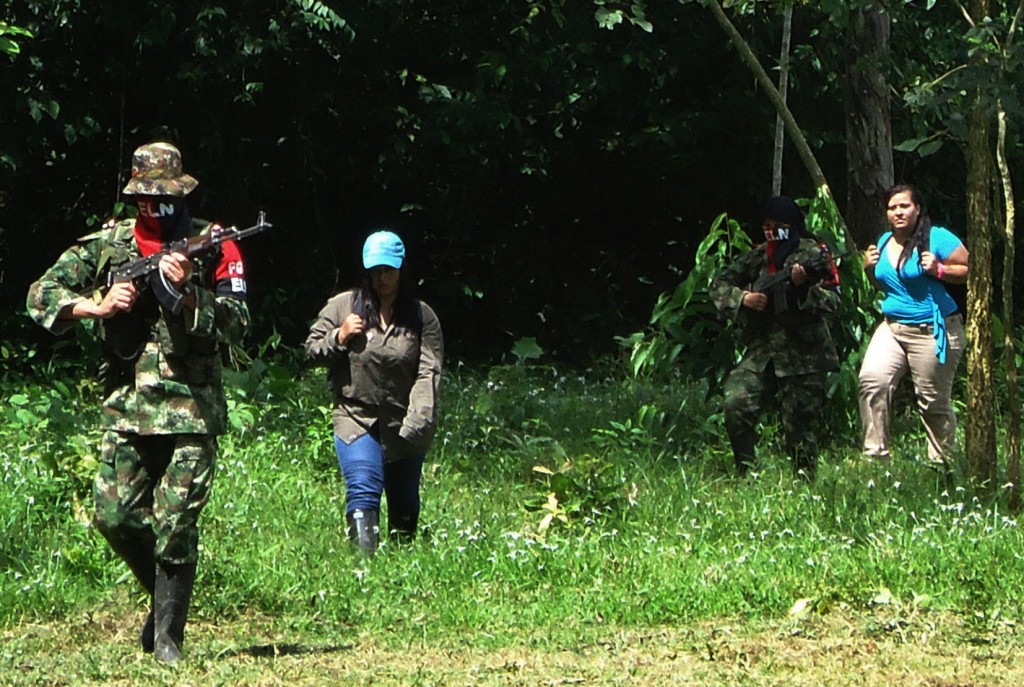 As a peace deal with the FARC nears, pressure is rising on other armed groups

Colombia has suffered decades of civil conflicts, claiming more than 220,000 lives since the 1960s. Drug-fueled violence has forced more than 5 million civilians to leave their homes. Here, a look at the major guerrilla and paramilitary groups in the South American nation of 48 million people.

Who is the biggest?

The FARC, an acronym for the Fuerzas Armadas Revolucionarias de Colombia, has its roots as a peasant-based Marxist-Leninist group that emerged after the assassination of the liberal leader Jorge Gaitán in 1948. Its military wing was founded in 1964 with the declared goal of overthrowing Colombia's government.

Today it controls swathes of rural southern Colombia and is present in areas along its coast and the eastern border with Venezuela. With an estimated 8,000 fighters, down from about 20,000 in 2000, its military strength was significantly weakened by government offensives under former president Álvaro Uribe between 2002 and 2010, a period in which Colombia received billions in U.S. security assistance.  The group says it is fighting for land rights for the poor and opposes U.S. activities in Colombia. However in recent years it has become one of the world's largest drug trafficking organizations and also funds its activities through extortion and kidnappings–though kidnappings by the group have declined from three per day in 2000 to less than one a day, according to the website Insight Crime.

In June, the group bombed the Tansandio oil pipeline in western Colombia near the Ecuador border. The attack caused 10,000 barrels of oil to contaminate waterways and caused more than 150,000 people to lose access to drinking water. Colombia's government has called it the worst environmental disaster in the country's history.

The FARC's revenues from drug trafficking is a matter of some dispute. In 2006, the U.S. Justice Department estimated that the group supplied more than 50 percent of the world's cocaine. In 2013 the head of Colombia's police force estimated the group's drug revenues at around $1 billion per year. A year earlier, the country's defense minister put the figure at as much as $3.5 billion annually. The money comes both from the production and processing of cocaine as well as a "tax" on growers and traffickers that operate in their territory.

In September, FARC leaders and the Colombian government announced a draft peace deal to be finalized within six months. Terms of the deal include transfer of land to landless peasants, an end to the FARC's role in the drug trade and the normalization of the FARC as a Colombian political party. Most controversially, it also includes an amnesty for many of those involved in the fighting and a system of "transitional" justice for those who admit to committing atrocities that would allow them to avoid jail time.

The negotiations mark a change in approach from a decade ago, when Colombia's government focused on defeating the FARC and narco-trafficking through military means.

“President [Juan Manuel] Santos believes that there has to be a change in strategy as the war against drug trafficking has been a failure," says Mauricio Rodriguez, an adviser to Santos, in an interview. He wants "to base a new approach on evidence on how to deal with the drug problem.”

Whether the agreement is implemented in a way that allows for a durable peace after 50 years of war remains to be seen.

“There will not be violence if social changes are made," says Jasmin Hristov, a sociologist at Canada's McMaster University who studies Colombian armed groups. "For social change to happen, there has to be economic and political changes...The FARC side is not the only problem, the problem is also the government.” A Colombian soldier walks through a clandestine cocaine laboratory seized from the FARC in March 2010. (AP Photo/Christian Escobar Mora)

Who else is there?

The FARC isn't Colombia's only Marxist revolutionary group. There is also the Ejército de Liberación Nacional, or ELN, with about 1,500 fighters. While the FARC has its roots among Colombia's rural poor, the ELN was formed in the 1960s from a group of leftist students, intellectuals and Catholic priests who embraced Catholic liberation theology and Marxism. They oppose foreign involvement in Colombian politics, particularly that of the U.S. They also oppose the presence of multinational corporations and the privatization of natural resources.

During its early years, the group avoided most forms of criminal activity. However after the Colombian army nearly wiped the group out in 1973, it shifted tactics to engage in kidnappings and extortion in order to raise funds. Since the late 1980s, the group entered the drug trade and has been active in trafficking along Colombia's Pacific coast and the border of Venezuela. It has also allied itself with other criminal groups, according to a 2014 report from the Woodrow Wilson Center for International Scholars.

After peace talks between the Colombian government and the FARC began in 2012, an ELN leader suggested the group would also be interested in negotiating a deal with the authorities. In 2013 it released a kidnapped Canadian mining executive as a show of good faith. In January 2014, the two sides began preliminary discussions on a pact.  Those talks haven't brought an end to violence. The government accuses the ELN of launching twin bombings in Bogota in July that injured 10 people.

Recent progress between the government and the FARC in peace talks is likely to further raise the pressure on the ELN. "I believe that if they [ELN] don't join the peace process soon, they are ready to sign their own death sentence as a guerrilla movement,” says Ricardo Ávila, editor in chief of the Colombian business newspaper Portafolio. Colombian paramilitaries from the AUC stand guard during a ceremony to lay down their arms in northwest Colombia in 2005. (AP Photo/Fernando Vergara)

What about Colombia's right-wing paramilitaries?

From 1996 to 2006, one of the most violent groups in Colombia was the Autodefensas Unidas de Colombia, or AUC. The group was initially formed as a paramilitary force to aid the government in fighting the FARC and ELN. With more than 20,000 fighters at its peak, the group was soon heavily-involved in the drug trade and became notorious for its attacks on uncooperative civilians.

Although the AUC was officially disbanded in 2006, some former members chose to form smaller criminal groups to continue narco-trafficking. These groups, such as the Paisas, are collectively known as BACRIMS, a Spanish acronym for Emerging Bands of Colombia. Whether these groups can be demobilized as part of the current peace process is uncertain. "As long as there are paramilitary groups, the conflict will continue,” says Hristov.

One risk in the government's negotiations with the FARC is that some of the group's rank and file may follow the path of ex-AUC gunmen, and choose to form their own BACRIMS rather than lay down their arms.