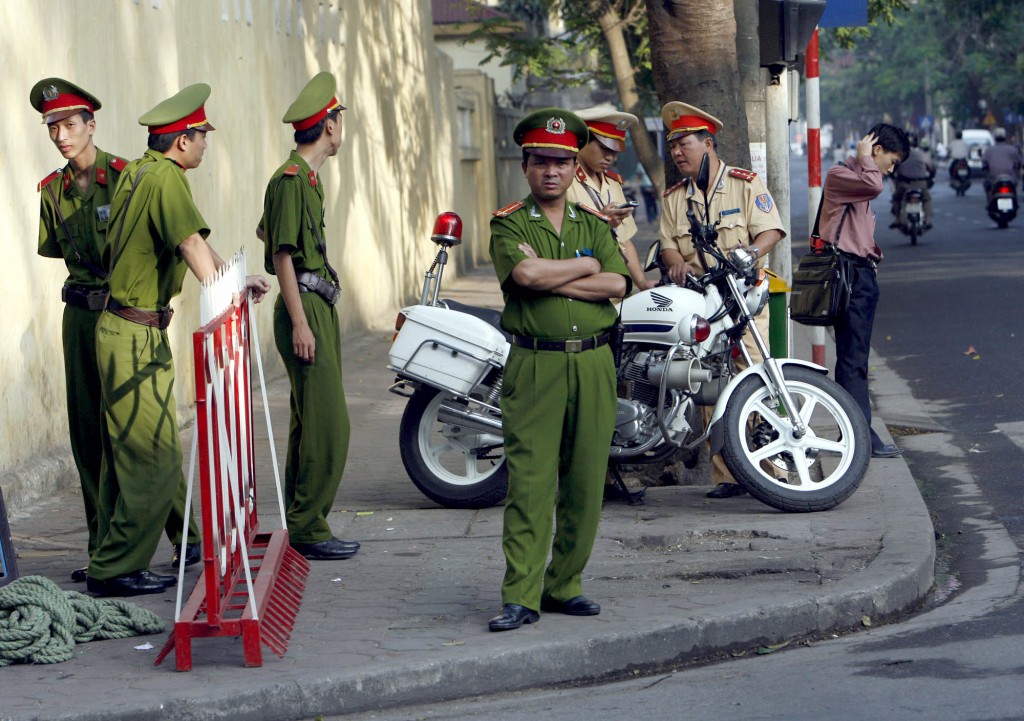 Police stand guard at an intersection near the court house where two human rights lawyers were put on trial in Hanoi, Vietnam on Friday, May 11, 2007. Nguyen Van Dai was sentenced to five years and Le Thi Cong Nhan to four years for advocating a multiparty state in Vietnam, where the ruling communist party does not tolerate challenges to its rule. (AP Photo/Tran Van Minh)

Six journalists and activists working for an independent news service were detained for several hours by Vietnamese police after airing news videos about human rights violations.

The journalists, who work for the newly-launched independent news service Luong Tam (Conscience) TV  in Vietnam, were individually arrested the morning of Sept. 23 and held at a police station in the capital city of Hanoi. While in detention, they were questioned about their roles in producing videos for the news service, according to Vietnam Human Rights Defenders, an activist group. Those detained include anchor Le Thi Yen, Radio Free Asia said.

That same evening, at least 20 activists arrived at the police station demanding the release of the journalists.  Police responded by pushing and shoving the activists, according to a purported video of the incident posted to the Dan Lam Bao blog.  The Conscience TV staff members were finally released at midnight, according to Vietnam Human Rights Defenders.

The network has been airing YouTube videos on human rights issues in Vietnam every week since Aug.19, according to Dam Lam Bao.

A Vietnamese blogger who was imprisoned in September 2011 was released from jail and exiled to the United States Sept. 19, according to France-based Reporters Without Borders. Fifteen other bloggers and citizen journalists remain in jail in the country.

Many of the journalists are jailed under the vaguely-worded penal code, which states "Those who abuse the rights to freedom of speech, freedom of press, freedom of belief, religion, assembly, association and other democratic freedoms to infringe upon the interests of the State, the legitimate rights and interests of organizations and/or citizens, shall be subject to warning, non-custodial reform for up to three years or a prison term of between six months and three years."

Vietnam is ranked sixth on the Committee to Protect Journalist's list of 10 most censored countries and is also among the top 10 jailers of journalists, according to CPJ.