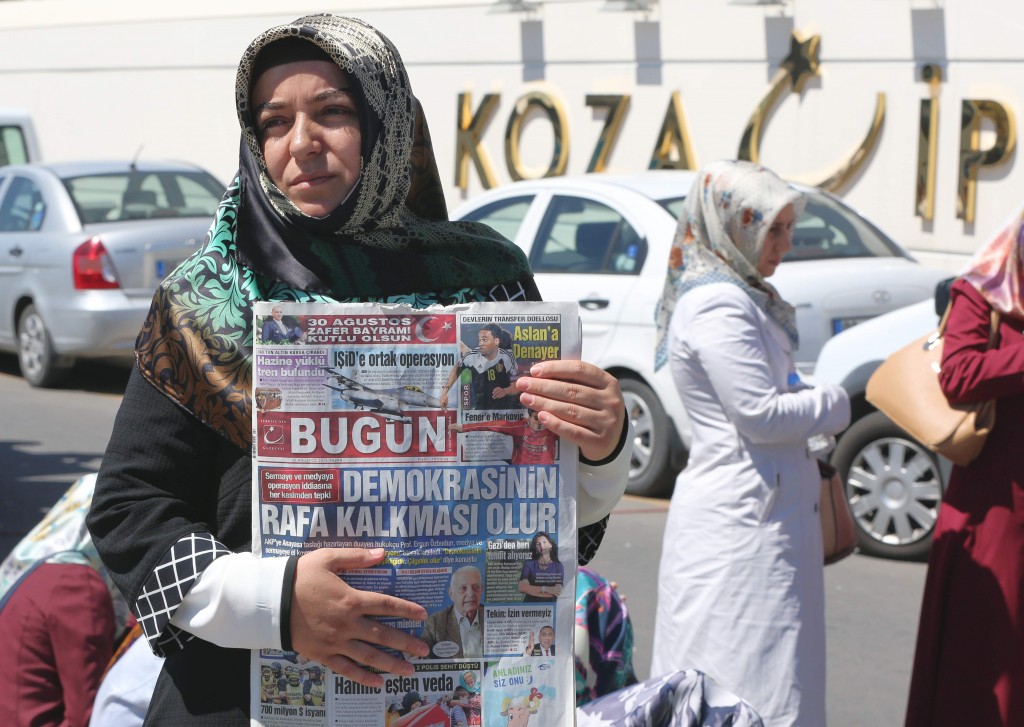 A woman holds a newspaper with the headline "Operation against the media is the end of democracy" as they protest while police search the premises of Koza Ipek Holding and media group close to a U.S.-based moderate Islamic cleric whom the government accuses of trying to destabilize it, in Ankara, Turkey, Sept. 1, 2015. (AP Photo/Burhan Ozbilici)

Police in Turkey raided the offices of an Ankara-based media conglomerate critical of the government a day after separately charging two British reporters for VICE News and their Turkish fixer with aiding a terrorist organization.

Seven people were arrested from the raid on Koza-Ipek Holding Sept. 1 and an arrest warrant was issued for the group's chairman Akin Ipek, the Anadolu Agency reported. The raid came one day after the group's Bugün daily published video stills it said showed arms being transferred from Turkey to forces in Syria from the Islamic State in the Levant (ISIL). The state-run agency said the move against Koza-Ipek, which is affiliated with the opposition Gulen movement, was part of a counter-terrorism operation.

Erhan Başyurt, the daily's editor-in-chief, called the raid "...a police-escorted operation meant to intimidate and silence," according to Bugün.

The move came as two British journalists and an Iraqi translator for VICE News were transferred to a Turkish high security prison where they await trial after being charged Sept. 1 with aiding a terrorist group. Jake Hanrahan and Philip Pendlebury along with Turkish-based Iraqi translator Mohammed Ismael Rasool were detained Aug. 27 in the southeastern province of Diyarbakir while covering clashes between Kurdish militants and Turkish police.

Security sources in Diyabakir confirmed the journalists were detained on suspicion of assisting the militant organization known as Islamic State, according to Amnesty International. The journalists’ lawyer told Amnesty that the hotel rooms the journalists had been staying in were searched, and their recording equipment and footage seized by authorities.

The two moves highlight Turkey's complicated role in the current conflict in the Middle East, where both ISIL and Turkey have battled militants from the Kurdistan Workers' Party (PKK). The PKK is classified as a terrorist organization by NATO and European Union. Research from the Committee to Protect Journalists has shown that “journalists seeking to cover PKK activities have often been imprisoned or obstructed."

The escalation of violence between Turkish security forces and the PKK reached a peak July 30 when separatists killed 18 police officers and soldiers. This ended a two-year ceasefire between the Turkish government and the PKK. .

In late July, Turkey’s telecommunications regulator, the TİB, blocked domestic access to leftist and pro-Kurdish websites based in Turkey and northern Iraq. Turkish daily Cumhuriyet reported that the TİB has blocked access to more than 77,000 websites since 2008, including social media platforms Twitter, Facebook and YouTube.

Reporters Without Borders, the world’s largest press advocacy group, ranked Turkey 149th out of 180 countries in its 2015 press freedom index.