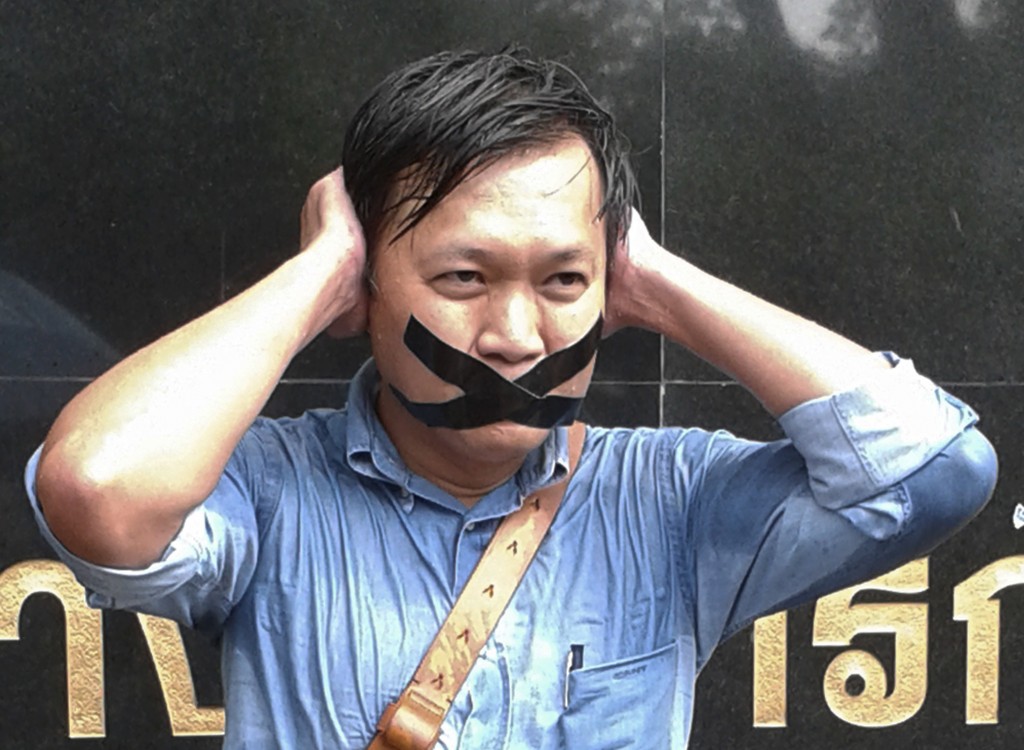 Pravit Rojanaphruk, an outspoken Thai columnist for the English-language daily The Nation, poses for a photograph while being called to report himself to the ruling military along with other journalists in Bangkok, Thailand Sunday, May 25, 2014. A spokesman for Thailand's coup leaders said Sunday that democracy had caused "losses" for the country, as the junta sought to combat growing international condemnation and hundreds of protesters angrily confronted soldiers in central Bangkok. (AP Photo)

A Thai journalist has resigned from a local newspaper after being detained at a military camp for his critical reporting on the country’s military junta.

Columnist Pravit Rojanaphruk tweeted Sept. 16 he was resigning from The Nation, an English-language newspaper in Thailand. He had been working there for more than 23 years and said his withdrawal will “save the paper from further pressure.”

“Sometimes we have to sacrifice our freedom in order to protect liberty for society,” he wrote in a Facebook post after his release.

Rojanaphruk was detained Sept. 13 after The Nation published an article he wrote on a looming "constitution crisis." The article "warned of a vicious cycle where people would keep on rejecting junta-sponsored draft charters...deepening the political chasm."

Thanks The Nation for everything. After discussing with management I agreed to resign to save the paper from further pressure. #Thailand

The article comes a week after the military junta rejected a draft constitution Sept. 6, giving itself at least seven more months of power. The military has ruled the southeast Asian nation since May 2014, when it toppled the government of former prime minister Yingluck Shinawatra in a coup.

After the publication of the article, Rojanaphruk was summoned to the army headquarters in Bangkok, and then detained at an “attitude adjustment” military camp, according to the Foreign Correspondent's Club of Thailand (FCCT).

"A 4 x 4 metre room. With no daylight or sky to see," Rojanaphruk posted on Facebook. "There was a CCTV staring at me. But little air ventilation. I was locked up inside for two nights. For merely questioning the legitimacy of the Thai junta leader."

Under the control of Thailand’s junta, numerous politicians, journalists and citizens critical of the government’s position have been required to attend "attitude adjustment" sessions. An NCPO spokesperson said people were picked for "attitude adjustment" based on their behavior, not their profession.

Before he was released, Rojanaphruk signed an agreement with the National Council for Peace and Order (NCPO), the name of the ruling junta, "not to lead, participate or assist any anti-coup movement," according to The Nation. The NCPO also filed a pending police complaint against Rojanaphruk, which will be activated if he violates the agreement again.