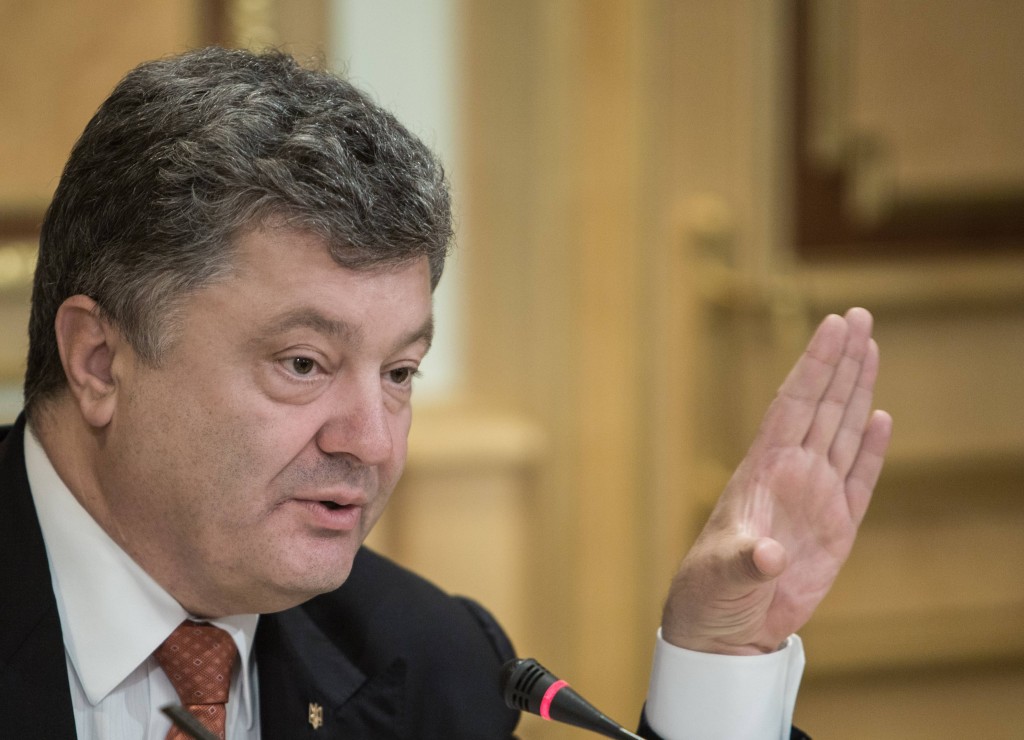 In this photo made Wednesday, Sept. 16, 2015, Ukrainian President Petro Poroshenko speaks with EU officials in Kiev, Ukraine. Poroshenko on Wednesday signed a decree, banning entry to Ukraine to nearly 400 individuals, dozens of reporters including three Moscow-based BBC journalists. The decree said that all the journalists on the list were an unspecified security threat. (AP Photo/ Mykhailo Markiv, Pool)

Ukrainian authorities have removed six European journalists from a list of people banned from entering the country. The journalists were taken off the list a day after Ukraine President Petro Poroshenko signed a decree Sept. 16 expanding the blacklist.

The Ukrainian blacklist bans 388 individuals and entities — including at least 41 journalists and bloggers — from entering Ukraine for one year. Those on the list pose "real or potential threat to Ukraine’s national interests, national security, sovereignty, and territorial integrity," the country's National Security and Defense Council said, according Human Rights Watch.

Poroshenko has said the list targeted people and companies connected to Russia's annexation of Crimea and the Russian-backed rebellion in eastern Ukraine, according to news reports. Poroshenko signed the decree in response to rebel leaders holding elections in eastern Ukraine, which would be illegal, Human Rights Watch said.

The Spanish reporters removed from the list are believed kidnapped by the Islamic State since their disappearance from Syria July 12 according to The Guardian. Rutz has claimed to be unaware as to why he was listed since he has never been to the Ukraine, according to ABC News.

The list sparked much criticism from leaders of the European Union according to Reuters. BBC’s Foreign Editor, Andrew Roy condemned it and called it a “shameful attack on media freedom” since the BBC was reporting the crisis in Ukraine “impartially and objectively.”

The New York-based Committee to Protect Journalists said it welcomed Poroshenko’s decision to remove the six, but has urged him to remove all journalists from the list of banned individuals.

This is the first sanction list against Russians and other foreigners that Kiev has announced since pro-Russian fighter began seizing  territory from Ukraine in the Crimean peninsula in February 2014.