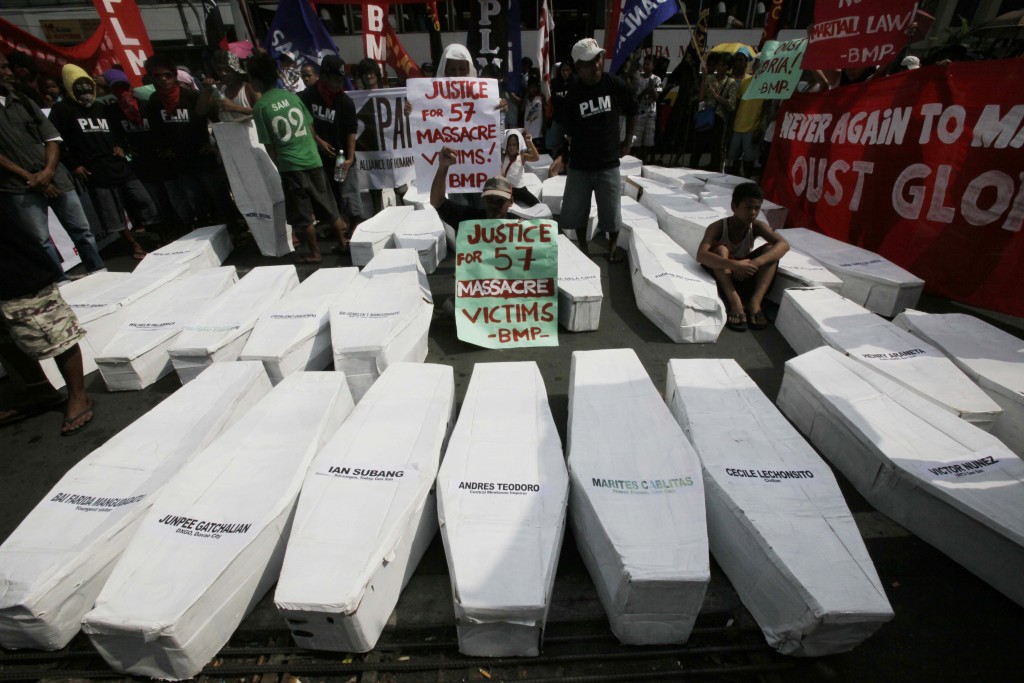 Protesters lay down mock coffins symbolizing the 57 massacre victims, during a rally at the National Bureau of Investigation in Manila, Philippines. (AP Photo/Bullit Marquez)

Nonoy Espina has worked as a journalist in the the Philippines for more than 28 years, covering news ranging from economic issues to insurgencies. Based in Bacolod City, about 300 miles (482 kilometers) south of Manila, he frequently travels to Mindanao, the second-largest island in the Philippines. In November 2009 he was in Mindanao with a photographer for the New York Times, covering civil conflict in the province of Maguindanao, an area where competition for power between the Ampatuan and Mangudadatu clans occasionally turned violent.

As they prepared to leave Maguindanao, he got a tip: renewed fighting between the clans was expected to break out soon. The tension was the result of the decision by a local official, Esmael Mangudadtu to run for governor of Maguindanao, a spot long held by Ampatuans.

Espina considered staying in Maguindanao to cover the start of Mangudadtu's campaign, but instead got on a plane and went back to Manila. It was a fateful decision. Shortly after returning to Manila he got a text: a convoy of journalists and Mangudadtu supporters had gone missing. Hours later, the army discovered a mass grave. Inside were the bodies of 58 people, including 32 reporters and media workers.

Two days later, Espina went back to Maguindanao to cover the exhumation of the bodies. A backhoe lifts a vehicle from a grave days after the massacre (Credit: Nonoy Espina)

"We went up the hills, there were tons of of police. When we came there, the backhoes used to bury the bodies and vehicles were still there,” says Espina. "The vehicles were crashed against vehicles. They [the perpetrators] tried to bury [them] along with the victims. They actually tried to cover up the place." An excavation team works with a backhoe to exhume bodies (Credit: Nonoy Espina)

As the excavation team unearthed victims, Espina, who is director of the National Union of Journalists of the Philippines (NUJP) began taking names of the deceased journalists as a crowd gathered at the site. As he called the name of each victim, family members would come forward. In one case, the wife of one of the victims approached Espina and asked him to add the names of the victim's mistress and his children by her.

Espina was baffled. Then he realized what she was saying. “It’s pretty standard for some journalists" in the Philippines to have both a wife and an "illegal" wife with family, he says.

“That was a light moment in the midst of the process,” Espina says. “There was a wife who was graceful enough to tell us that there was another family. And yes we put [the second family's names] down. We don’t discriminate that way.” Police cordoned off the grave. Armed Philippine military were standing up the hill. Excavation team lined up the bodies and covered them with banana leaves (Credit: Nonoy Espina)

After spending almost a week at the scene, Espina found it odd that he couldn’t recall the stench. “There was no smell,” Espina says. “Our palates pick up smells. But at the scene, I didn’t smell anything."

It was only after they left the scene and turned on the air conditioning in the car that he realized the smell had permeated his body. Local police secured the massacre grave and covered his nose with a handkerchief (Credit: Nonoy Espina)

“All of the victims are breadwinners,” Espina says. “How are these families going to survive? Can you imagine more than 300 [people] lost their support?”

The NUJP has provided scholarships for children of the slain journalists. As of April 2014, a total of 32 had graduated from college with the help of the program. Bodies were lined up and put on the ground next to the grass. Police investigators looked at the corpses with banana leaves covered (Credit: Nonoy Espina)

The Philippines is not a war zone, but the nation’s internal conflicts have turned it into one of the most dangerous places for journalists in the world. Muslim separatist movements and clan rivalries provide a continuing source of violence in a nation awash in guns. More than 200 journalists and media workers have been killed since 1986, according to the Center for Media Freedom and Responsibility. At least 30 have been killed since the Maguindano massacre.

"Things haven't really changed,” Espina says. “We are basically on the frontline of everything that is happening.”