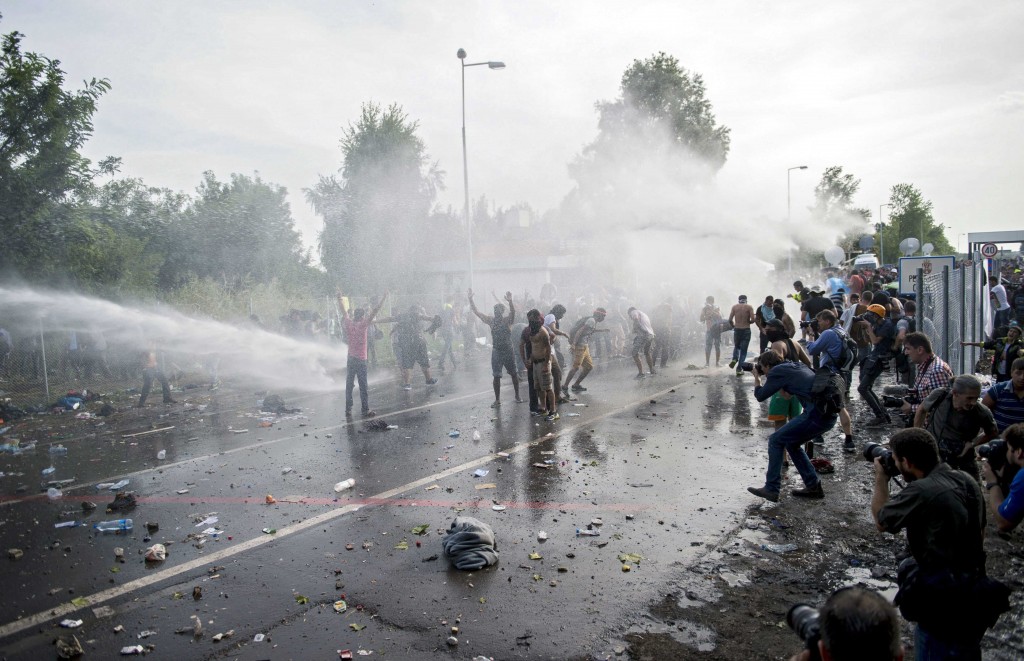 Hungarian police use water cannons on migrants at the Horgos 2 border crossing between Serbia and Hungary, Sept. 16, 2015. (EPA/Tamas Soki)

As Orban speaks of an "attack" on Christianity; other Hungarians are more welcoming

Prime Minister Viktor Orban, who has previously taken heat for the country’s treatment of Roma and Jewish minorities, did little to improve his image earlier this month by telling reporters “we have a right to decide that we do not want a large number of Muslim people in our country.”

Yet not all Hungarians are supportive of Orban’s aggressive response to the influx of refugees fleeing war in the Middle East and crises in Africa. In Szeged, a city about 16 miles (25 km) from the razor wire fence on the Serbian frontier, activists, churches and ordinary citizens have formed the group Migrant Solidarity Szeged to help some of the tens of thousands trying to make their way to Germany and other destinations in Europe.

Volunteers at Szeged’s main railway station distribute food, water and other necessities to the migrants, many of whom come with nothing but a small rucksack, a wad of cash and a smartphone. MigSzol, as the group is known, is just one of a number of grassroots groups that have sprung up to cope with the influx.

“We want to send a political message which is that we do not want to let Mr. Orban dominate the public discourse over the migrant crisis,” says Mark Kekesi, one of the group’s coordinators, in an interview with Global Journalist. As he speaks, two busloads of migrants pull into the station from one of Hungary’s ‘transit camps’ on the border. Afghan refugees sleep next to razor-wire barrier at the Serbian side of Hungary's border fence with Serbia, in Asotthalom, southern Hungary, Sept. 17, 2015. (AP Photo/Muhammed Muheisen)

Migrants are supposed to wait in these transit camps to file their asylum applications, after which they are taken to nearby train stations to be transferred to other refugee camps scattered around the country. In the camps they receive food, shelter and advice while their applications are pending.

However since this can take several months and because the migrants are free to leave the camps, many do so. Through Sept. 16, nearly 65,000 asylum applications in Hungary this year were suspended because the applicant could not be found. Many are likely to have already made their way west to Austria and on to Germany and other places in northern Europe.

One beneficiary of the crisis has been Hungary’s booming black market. This includes taxi drivers taking migrants to the Austrian border for extortionate sums, and people-smugglers hiding migrants in trucks and driving them north. On the street, private money-changers are giving some refugees 200 forints for a euro, even though the bank rate is over 300 forints . If Orban’s government has its way, the flood of refugees will slow to a trickle. On Sept. 15, a new law went into effect making crossing the border without documentation an offense punishable by up to three years in jail.

Migrants can also face immediate deportation back to Serbia, which has become a popular entry point to the EU for migrants transiting through the Balkans. The border closure led to a riot Sept. 16, as police responded with tear gas to migrants hurling insults, throwing rocks and setting small fires.

Orban has argued that since other countries on the route including Turkey, Macedonia and Serbia are all stable, migrants should register there first and try to rebuild their lives. Their continuation on to Hungary, in his view, makes them “economic migrants” who may lose eligibility to claim asylum as a refugee.

Orban’s tough stance comes as his right-wing Fidesz has lost support to Hungary’s far-right and strenuously anti-immigrant Jobbik party in opinion polls. Gabor Vona, the leader of Jobbik, recently led a demonstration at the Hungarian-Serbian border to tell migrants they were unwelcome.

“Hungary is not responsible for the situation in Syria and it should not bear the brunt of the crisis – if anyone is responsible it is the West and the U.S.,” Vona told Global Journalist. “Allowing hundreds of thousands in will only create even bigger problems.”

An EU deal backed by Germany to resettle 120,000 migrants across the 28-nation bloc reached Sept. 22 isn’t likely to end the debate. That agreement covered 54,000 migrants in Hungary as well as another 66,000 currently in Greece and Italy. But the deal covers only a fraction of those trying to get in to the EU, and was reached over the objection of Hungary, the Czech Republic, Slovakia and Romania, who oppose taking in thousands of new refugees. Orban has called the flow of migrants an “all-out attack on Christianity and Christian values.” That seems an overstatement. But the dispute has tested the open border policy made possible by the Schengen Treaty. Of course that treaty has benefited Hungary and eastern European nations disproportionately. In a new study published earlier this year, World Bank economists showed that remittances from Hungarians living overseas accounted for more than 3 percent of the country’s GDP­–a figure higher than that of Poland, Romania or Bulgaria.

Given that, Orban’s hard-line is rubbing some the wrong way in Germany and other countries that have been more welcoming to migrants. “My blood pressure is already rising just thinking about this issue–many EU members were all too happy to share in the good times, but they seem now to leave us in the lurch when times get tougher,” says one German businessman.