Impunity is legacy of 2009 Filipino massacre 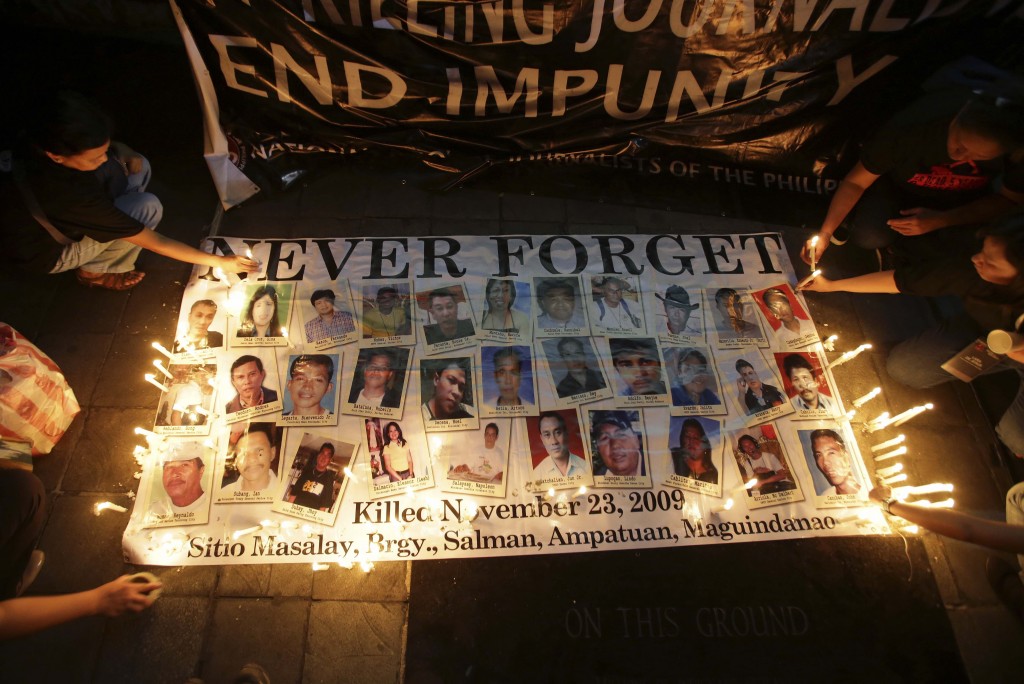 Filipinos light candles on a slogan bearing images of victims of a massacre that killed 58 people, including 32 journalists, as they mark it's 5th anniversary with a candle lighting event at the historic EDSA Shrine in suburban Quezon city, north of Manila, Philippines on Sunday, Nov. 23, 2014.Five years after gunmen flagged down a convoy of cars and massacred all 58 occupants, including scores of journalists, in Maguindanao southern Philippine province, the body count continues to rise. The Ampatuan clan is tagged as the prime suspects in the carnage. (AP Photo/Aaron Favila)

The 2009 massacre of 58 people, including 32 journalists, in the Philippines province of Maguindanao carries a heavy legacy for the rapidly developing southeast Asian nation. Six years later, no one has been convicted of any crime related to the killings – even though witnesses and human rights groups have managed to gather extensive evidence linking the massacre to the private militia and security forces loyal to the former provincial governor, Andal Ampatuan Sr.

Maguindanao has particular resonance for Coleen Jose, a Philippines-born reporter and photographer who recently spent eight months researching press freedom issues in the archipelago for the Committee to Protect Journalists.  Jose discussed the failure to convict anyone in the Maguindano case and its repercussions on Filipino society with Global Journalist's Loretta Lee.

Global Journalist: What is the biggest problem in the Philippines in terms of press freedom? Coleen Jose: The top three countries where
the killings of journalists go
unpunished: the first is Iraq, second is Somalia and the third is the Philippines. The lack of justice has really permeated all of society, not just journalism but anything that concerns people of power....[journalists] are more cautious on what they report on, which includes corruption. They have to think about every word that you say or every person that you talk to. [Maguindanao] is definitely part of a larger issue. People look at that case and they say "these people aren't going to be prosecuted, even by the highest courts in the Philippines."

Jose: There is still, on the local level, a lack of political will to help prosecute the cases. They don't have the resources, and then there are threats. As you might have read, one of the justices is going to step down [from the case] because she probably wanted to move on for personal reasons...there are threats to her family.

GJ: Some witnesses also have been killed. What do you make of that?

Jose: Personally, I feel angry, because of the lack of action from the government's side when they see that witnesses...were hunted down by people who are connected to the killings. Filipinos hold slogans during a candle lighting event to mark the 5th anniversary of the massacre of 58 people in the Philippines on Nov. 23, 2014. (AP Photo/Aaron Favila)

And also, honestly I am fearful. When I was reporting, I needed to figure out who to trust. There is a lack of trust on the ground in that region, for both local and foreign journalists. But for foreign journalists, obviously [they] can just get out whenever. Whereas local journalists, as one of them was telling me, you see the people in the market, you see them everyday, it is not something you can escape. I feel fearful for them.

GJ: What about self-censorship in the media?

Jose: It is definitely an issue. I think it depends on who the journalist is. If you are a broadcaster in Manila, then you have more protection and more resources around you. But for the local journalists, the ones I spoke with in my articles, it's something they are conscious of. Even just this year,  Magsino [a reporter killed in April in a village north of Manila], her murder has connection to what she reported previously.

GJ: How long do you think it will take until justice is served for the Maguindanao massacre?

Jose: I am hopeful that the alleged mastermind will be prosecuted as quickly as possible. But knowing how it has been the last six years, it is very difficult. It could happen in a year or two. And that will all depend on the national government and any amount of national pressure...[human rights groups] facilitate a certain degree of change, because they give exposure to the issues.