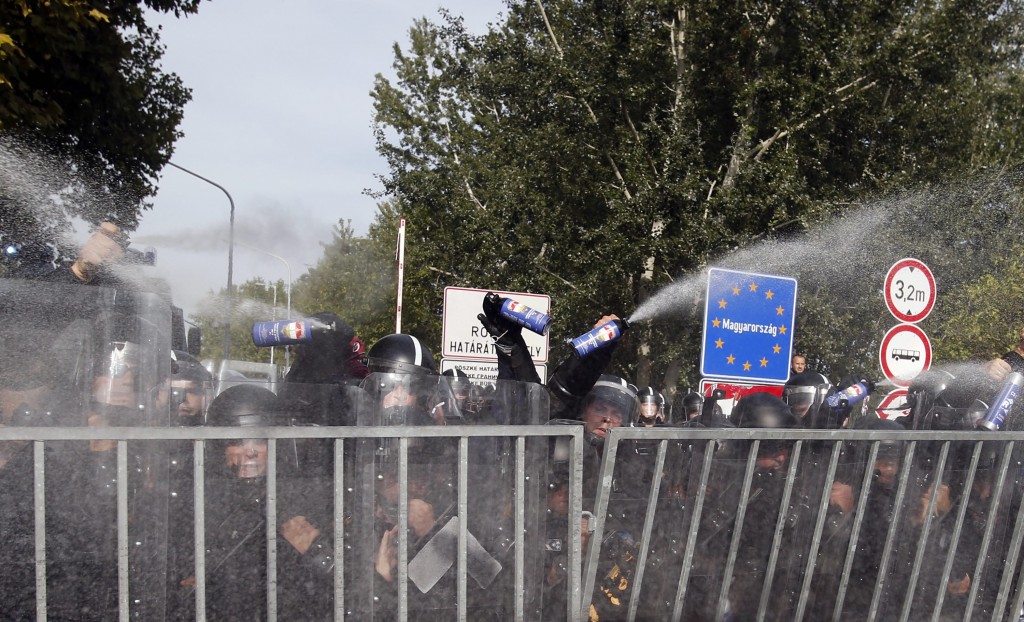 Hungarian police use pepper spray at the "Horgos 2" border crossing into Hungary, near Horgos, Serbia, Wednesday, Sept. 16, 2015. Small groups of migrants continued to sneak into Hungary on Wednesday, a day after the country sealed its border with Serbia and began arresting people trying to breach the razor-wire barrier, while a first group arrived in Croatia seeking another way into the European Union. (AP Photo/Darko Vojinovic)

Seven journalists traveling with migrants to Hungary from Serbia were beaten or arrested in separate incidents by Hungarian police on a single day near the border.

A three-person TV crew from Serbia, two photographers from Australia and Sweden, and reporters from Poland and Slovakia were attacked separately by Hungarian police Sept. 16, the Committee to Protect Journalists said, citing social media accounts and news reports.

Slovak reporter, Tímea Beck, and Polish reporter Jacek Tacik were also arrested and accused of illegally crossing into Hungary, although both Slovakia and Poland are part of the Schengen area that allows for visa-free travel within Europe. Tacik, a reporter for state-owned broadcaster TVP, was treated for head injuries after being beaten by police and held in custody for 13 hours, the Associated Press reported.

The arrest and beatings came just days before Hungary's parliament approved the use of the country's military to aid in the migration crisis Sept. 21. To date the central European nation of 10 million has registered 220,000 asylum seekers this year, according to Reuters. Many of the migrants are seeking to pass through Hungary en route to Germany. Thousands of refugees, mainly from Syria and Iraq, have been trying to cross into Europe, but have faced governments unwilling to accept them. The EU is planning an emergency summit Sept. 23 to discuss ways to share the allocation of refugees between the 28 states.

Beck was with a group of journalists watching a group of migrants try to get across the fence from Serbia to Hungary. Police grabbed her as she was trying to help one family get off the ground, she said in an interview with Dennik N, a Slovakian daily. Police beat her with a baton, cuffed her with a plastic strap and threw her on the ground.

Serbian journalists Vladana Hadži Mijailović, Miroslav Đurašinović and Jovan Djurovic of Radio Television Serbia were also beaten by Hungarian police even after they identified themselves as journalists, according to the news site B92. Their recording equipment also was broken by police.

Australian photographer Warren Richardson was kicked and Swedish photographer Meli Petersson Ellafi was knocked to the ground, The Guardian reported.

In a previous incident Sept. 12, Hungarian police detained Associated Press cameraman Luca Muzi and forced him to delete footage of the refugees taken over two days. The footage also included video of a muzzled police dog attacking a Syrian man, according to AP.

The incidents drew a sharp rebuke from the Organization for Security and Cooperation in Europe's press freedom watchdog Dunja Mijatović. Hungarian police beat reporters with batons, forced journalists to delete heir footage, broke their equipment, and threw teargas," said Mijatović, in a statement. “Such behavior is totally unacceptable, as it disregards the essential role of the media, and endangers the safety of journalists.”

A statement from Hungarian police said they "categorically" deny beating-up any journalists, the AP said. The statement also said any reporters injured at the border were to blame for their own injuries because police had warned that they would use force against the crowds.