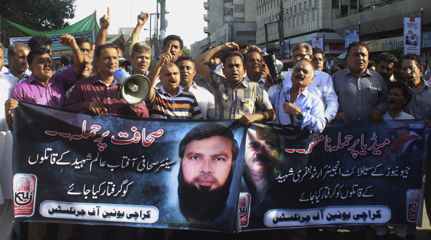 Four suspects have been arrested in the shooting death a former Pakistani television journalist, a killing that ended a bloody 24 hours for Pakistani media in which three media workers were attacked.

Aftab Alam, 42, a former reporter for Samaa TV and Geo News was shot in the head Sept. 9 outside his home in the southern port city of Karachi, Agence France-Presse reported. Four men were arrested including the suspected killer, Geo TV reported Sept. 11, citing Karachi police.

Journalists for Geo News have been repeatedly targeted in Pakistan. One of Geo’s leading anchors, Hamid Mir, survived an attack in Karachi in 2014. Wali Khan Babar, a Geo News reporter, was shot dead after he finalized a report on the local gangs’  in 2011, according to The Nation, a Pakistan-based news agency.

Motives for the killing Alam and Jafri remain unclear. However press groups including the Committee to Protect Journalists criticized the Pakistani government's efforts to protect the media.

"With poor investigations and little follow up, attacks on journalists continue to go unexplained and unprosecuted. Journalists have a right to expect better protection from Pakistan's government," said Bob Dietz, CPJ's Asia program coordinator, in a statement. "The recent spate of attacks underscores not only the danger that journalists face, but also the authorities' inability to follow through on promises to protect them."

Pakistan is one of the world’s most dangerous nations for journalists, with 14 killed in 2014, according to the International Federation of Journalists. Most of them were directly linked to shooing assassinations. Those targeting journalists include not just criminal networks and Islamic militants but Pakistan's intelligence service, the group reported.