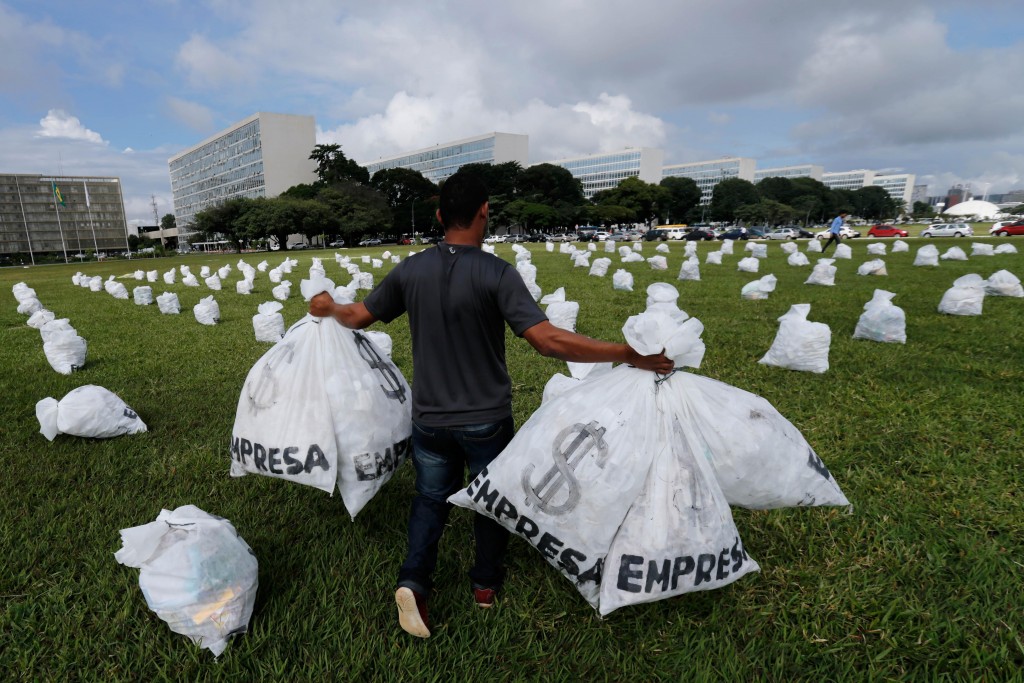 A member of the Clean Elections Movement carries bags representing money, during protest against the private financing of political campaigns, in front of the Brazilian National Congress, in Brasilia, Brazil, Tuesday, March 24, 2015. Approximately 200 bags were left in front of the National Congress in an attempt to mobilize civil society for political reform. (AP Photo/Eraldo Peres)

A Brazilian radio announcer known for criticizing local politicians was shot dead by two gunmen while broadcasting a live  program in the town of Camocim, in the northeastern state of Ceara.

Gleydson Carvalho was shot five times Aug. 7 by men who burst into the Radio Libertade studio during Carvalho’s regular midday slot, news outlets including Agence France-Presse reported.  A sound engineer who was present at the time of the shooting was unarmed, and the two men fled the scene on motorbike, the news agency said, citing police.

Two men have been arrested in the case but the suspected gunman is still at large, the New York Times said.

Carvalho is the fourth journalist to be killed in Brazil this year because of their work. Radio journalist Djalma Santos da Conceição and blogger Evany José Metzker were killed in a one-week period in May.

“Violence against the press in Brazil had already reached unacceptable levels. Now we are stunned by the brazen murder of Gleydson Carvalho in the middle of his radio show,” said Sara Rafsky, a research associate for the Committee to Protect Journalists. “Authorities must take action to combat a press freedom crisis that is violating the right of all Brazilians to be informed, not to mention ending journalists' lives.”

Brazil is the third most dangerous country in Latin America for journalists, following Mexico and Honduras, with 38 journalists killed between 2000 and 2014, according to the nonprofit group Reporters Without Borders.