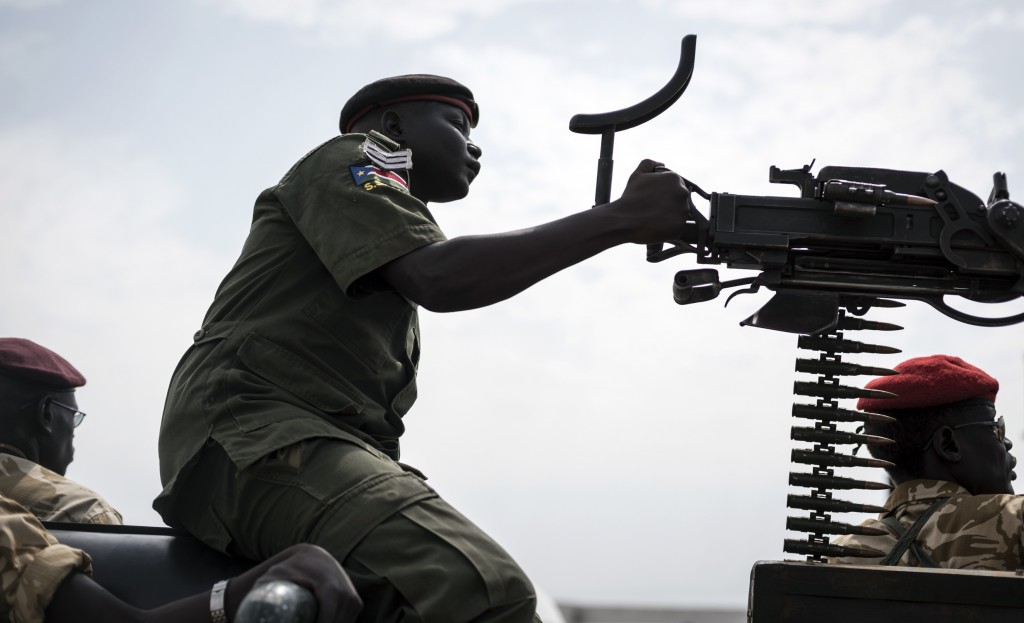 Juba, South Sudan – When the invitation came to speak at a 2015 World Press Freedom Day conference in this war-ravaged nation, I didn’t hesitate. The government had been bludgeoning journalists. It was an opportunity to weigh in and applaud their courage.

As the plane descended onto the pockmarked runway and taxied toward a ramshackle terminal, I wondered what life was like for local media in one of Africa’s poorest countries.

The country is still recovering from a 22-year war that left about 2 million people dead and led to its U.S.-backed 2011 independence from Sudan. But independence hasn’t brought peace. South Sudan is riddled by bloody ethnic warfare that has forced more than 1.9 million from their homes. The atrocities are mindboggling.

I was escorted to an armored vehicle, courtesy of the U.S. Embassy in Juba, and driven along dirt roads to a hotel protected by high walls and security guards. I was scheduled to conduct training workshops and meet with leaders of media organizations during the week-long stay. Nothing prepared me for what happened next.

On May 4, the first day of the conference, I arrived early at the elegant Dembesh Hotel to shake hands with organizers and other speakers, including those from Kenya, Uganda and South Africa.

During the opening ceremony, I watched as the audience of around 200 rose to sing the national anthem of South Sudan, the world’s youngest nation. Their country gained hard-fought independence in July 2011. I felt a touch of pride in their voices.

Later that morning, the guest of honor, Information Minister Michael Makuei, a tall, commanding figure in a neatly tailored beige suit and spectacles, stepped to the podium. His voice filled the room as he delivered polite greetings and lauded conference organizers.

Then, the minister, a well-known antagonist of press freedom, put the hammer down.

For more than 30 minutes, he berated, threatened and preached to journalists in the room. He warned that although the constitution guaranteed press freedom, if they violated the country’s penal code, they would be punished.

He issued reminders, “Your nation’s security is number one” and it is the media’s duty to be seen as nationalists.

Makuei reiterated a steadfast rule: Media should not publish comments of rebel factions in the conflict. He’d made earlier threats to the U.N.’s FM radio station, Miraya, for interviewing the opposition. “If it happens again, we are shutting you down,” he told station managers.

News reports quoted Makuei as saying journalists would be prosecuted as agitators and enemies of the state for reporting views of rebel groups. Any perceived disloyalty by the media was a “stab in the back” to President Salva Kiir Mayardit and his regime. Those who crossed the line would pay.

So much for World Press Freedom Day.

None of what Makuei said was new to me. Before arriving in Juba, I had researched journalism in South Sudan and was aware of the intimidation and brazen attacks against media outlets and individuals.

What took me aback was Makuei's open hostility and intense disdain for the media in a high-profile public forum with tape recorders and cameras rolling. He scolded journalists like naughty children.

He delivered his soliloquy to an audience that included the Canadian, Dutch, Norwegian and European ambassadors, the U.S. Embassy’s charge d’affaire, the head of USAID in Juba, United Nations representatives and some of the country’s premier media professionals. An aid worker from the U.K. sitting next to me rolled her eyes during his tirade and told me bullying journalists was part of Makuei’s persona.  I cornered an embassy representative from a European country later that day – he would not comment on the record. His response: “We have to pick our battles carefully.” They all are skating on thin ice.

During tea break that afternoon, I talked with veteran journalist Alfred Taban, editor-in-chief of the daily Juba Monitor, to see how he interpreted Makuei’s comments.

“We have heard the minister threaten us before, but today, I can definitely say he was much harsher. He chose this conference to lay down the gauntlet,” said Taban, who refers to Makuei as the “minister of confrontation.”

Taban should know. He was arrested in March 2013 for an editorial he wrote less than a month after South Sudan agreed to be a pilot country for a United Nations program to create a free and safe environment for media workers.

Taban stressed that independence from Khartoum did not bring relief for the fragile independent press. Conditions worsened with the onset of the civil war in December 2013.

According to research in 2014 by the Committee to Protect Journalists’ (CPJ), “Since fighting broke out, not a single month has passed without incidents of security agents harassing the press . . . government security forces have raided all major media outlets in Juba this year.”

CPJ reported that any coverage of the rebels has been the most censored topic since the war started; journalists avoid certain topics to survive. All sides in the conflict target them.

Tom Rhodes, CPJ’s East Africa representative, reported that journalists covering rebel-controlled regions receive similar, if not worse, treatment. Some media outlets have been shuttered or taken over by the rebels. There have been instances of reporters arrested, beaten and charged with spying.

South Sudan’s citizens are the losers in this fight against press freedom. Widespread intimidation has led to a gap in balanced and fair reporting about the war and the myriad of other pitfalls facing the young nation. News the people have a right to know is being kept from them.

For foreign reporters, the remoteness of South Sudan makes covering the conflict a challenge. A landlocked country the size of France, it has about 120 miles (193 km) of paved roads. Still, the horrors of the war in South Sudan do draw occasional attention from western media. Displaced South Sudanese women in the town of Bentiu wait to access freshwater from a borehole in knee-deep floodwater, Sept. 22, 2014. (AP Photo/Matthew Abbott)

Kristof interviewed a father who “watched from a distance as South Sudan government soldiers tied up his 15 children and put them in a grass hut . . . He watched as the soldiers torched the hut and burned the man’s family alive.”

Such startling revelations are being spotlighted via social media around the globe. For local journalists, giving voice to the voiceless about these vile human rights violations could place them in harm’s way.

Journalists from the Nuer tribe are especially at risk from the Dinka-dominated government. According to CPJ, “Since former vice president Riek Machar and the majority of his rebel soldiers are Nuer, authorities categorize all Nuer journalists as opposition supporters.” Many have either quit, left the country or gone into hiding.

On the day of my departure, I waited in the Juba airport as boiling black clouds and torrential rains passed over, delaying the flight to Dubai. Memories of my week on the ground flooded back.

I marveled at the strong handshakes, vibrant smiles and courage of the journalists I worked with. Many were young, untrained and passionate about their role as public watchdogs. Veterans like Alfred Taban and Veronica Lucy Gordon, founder of the Association of Media Women in South Sudan, are paving the way.

During a workshop, I remembered a young reporter from an impoverished rural area proudly proclaiming, “Freedom of the press is the oxygen of democracy. That is why we are fighting so hard here.”

Ricchiardi, based in Washington, DC, specializes in international journalism training and conflict reporting