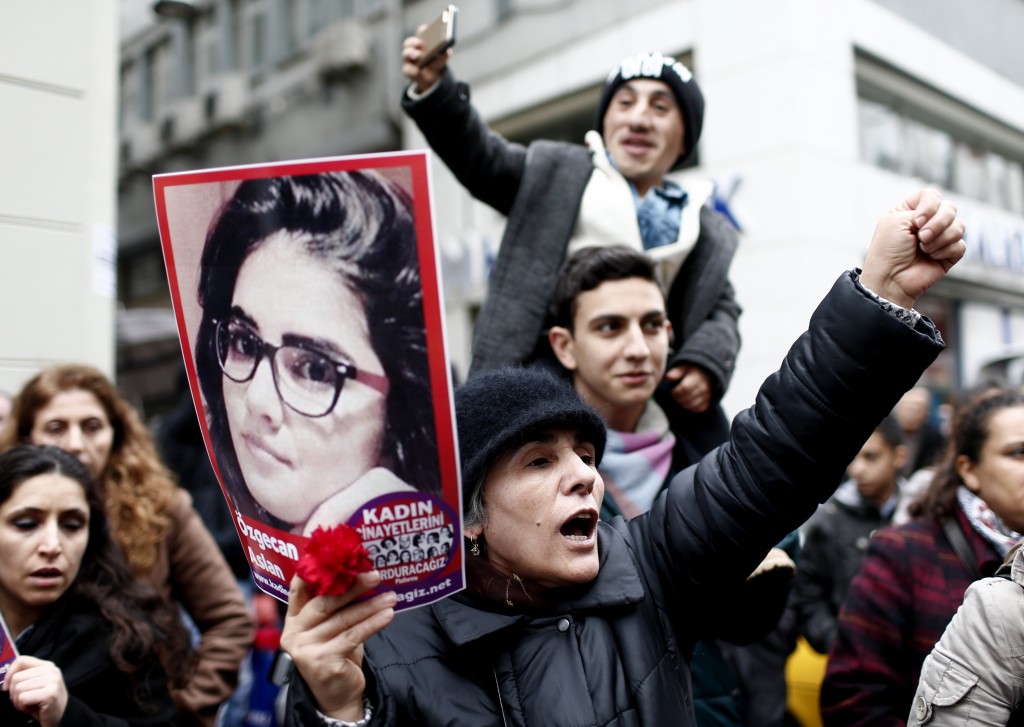 epa04619231 Turkish people shout slogans against the murder of a woman as they hold a picture of Ozgecan Aslan who was raped and killed by three suspects in Mersin city, during a demonstration in Istanbul, Turkey, 14 February 2015. Aslan, 20 years old female student, had been missing for two days and was found in a river after she was burned by her murderers on 13 February. EPA/SEDAT SUNA

Ozgecan Aslan was the last rider on a minibus in the city of Mersin in southern Turkey. But instead of taking the 20-year-old to her stop, the driver allegedly took advantage of her isolation and tried to rape her.

She fought back, digging her nails into his skin. Then, according to Turkish news accounts, he hit her with a crow bar and stabbed her until she was dead. He cut off her hands to hide the evidence and her burned body was later found in a riverbed near Mersin.

Aslan’s death sparked protests across the country, with over 1 million people signing an online petition and millions more tweeting #OzgecanAslan and #sendeanlat, which translates to “share your story” or “you must also tell.”

“It felt like the lid blowing off a boiling pot,” says Christina Asquith, a journalist based in Istanbul, who is covering the case. “People really wanted to see change, and they were frustrated not just with the law but with what they saw as a culture of impunity among Turkish men towards violence against women.”

The driver of the bus, Suphi Altındöken, is now on trial for her killing in the nearby city of Tarsus. His father and another man are also being tried on charges of helping dispose of Aslan’s body.

The extent of violence against women in Turkey is difficult to track, and as in other countries, many incidents go unreported. Yet there is evidence that the country is suffering from an epidemic. A study published last year in the International Journal of Gynecology & Obstetrics found that more than two-thirds of women interviewed by researchers in southern Turkey had experienced some form of domestic abuse at least once. At least 1,134 women were killed in Turkey over the last five years–nearly half by their husbands, according to Bianet, an independent news organization based in Turkey. One in five were killed for seeking a divorce or breakup.

Yet in a country where violence against women is routine, Asquith says the news of Aslan’s death seemed to affect people personally, and many felt a collective heartbreak over her loss. Turkish women gather to protest Aslan's killing in the capital Ankara, Feb. 21, 2015. The caption on the placard reads: "The language of the system." (AP Photo/Burhan Ozbilici)

“You couldn't really drive through Istanbul without seeing a billboard about it every couple of minutes,” says Asquith, who is the founder of the Fuller Project for International Reporting. “It was on all the television shows, all the covers of the newspapers.”

At the time of Aslan’s killing, Asquith was working with British filmmaker Chloe Fairweather on a short film called “Dying to Divorce.” The documentary unpacks the violence Turkish women often face when seeking to end a marriage and advocates for a shift in attitudes. Fairweather calls the popular upheaval over Aslan’s death a “hashtag revolution” – one enabled by social media, which allowed women to speak out without facing the threats inherent to protesting in the streets.

“Social media and hashtags in particular have become a way for women…to collectively get their voices heard when actually being seen in society to protest and be out there might be something that’s really dangerous,” Fairweather says. “It brought a lot of people together and made a lot of people in Turkey realize that they weren’t alone.”

The outpouring of voices also showed violence against women affects every level of society. “It’s not just people who live in rural areas that perhaps you’d expect these kind of problems to happen,” Fairweather says. “It’s people who are working women who are working in jobs, high-powered jobs.”

Many of those protesting have criticized the cultural acceptance of violence against women, a situation they say fails to discourage violence by men while encouraging women to keep quiet about abuse. Police often counsel women to forgive those who abuse them and stay with them rather than leave, according to a 2011 report from Human Rights Watch. That report also highlights flaws in Turkey's domestic violence law, which allows married women to petition for their abusers to be forced from a shared home, but not unmarried women.

Contributing to the problem is a legal system that allows judges wide discretion to reduce sentences for cases of abuse and sexual violence.

“Many conservative male judges will do that if they think that the woman deserves the abuse that she got in,” says Asquith. “They may say that she deserved it because she was wearing a short skirt or that she was out in the evening. The bar is set pretty low for what women do to be considered an act that merited violence.”

DYING TO DIVORCE from Chloe Fairweather on Vimeo.

And even as some laws have changed and feminism has spread as Turkey has developed, the culture has not always kept pace. “I don't think that same sort of awareness has occurred for men, and so you're dealing with women who now feel more entitled to stand up against men but men whose attitudes are exactly the same,” says Asquith. “Some feel that that might be driving more violence.”

Nor has the message from Turkey’s political leaders always been helpful. Turkish President Recep Tayyip Erdogan, whose Justice and Development Party suffered a setback in elections earlier this month, has publicly argued that women are not equal to men. Bülent Arinç, the country’s conservative deputy prime minister, has argued that women should not laugh out loud in public.

Such comments are likely only to inspire women’s advocates in Turkey. One Turkish campaigner who spoke with Fairweather and Asquith says that staying quiet is no longer an option. “She said, ‘I have to fight this to exist as a woman in this country because I don’t really have a choice,” says Fairweather.