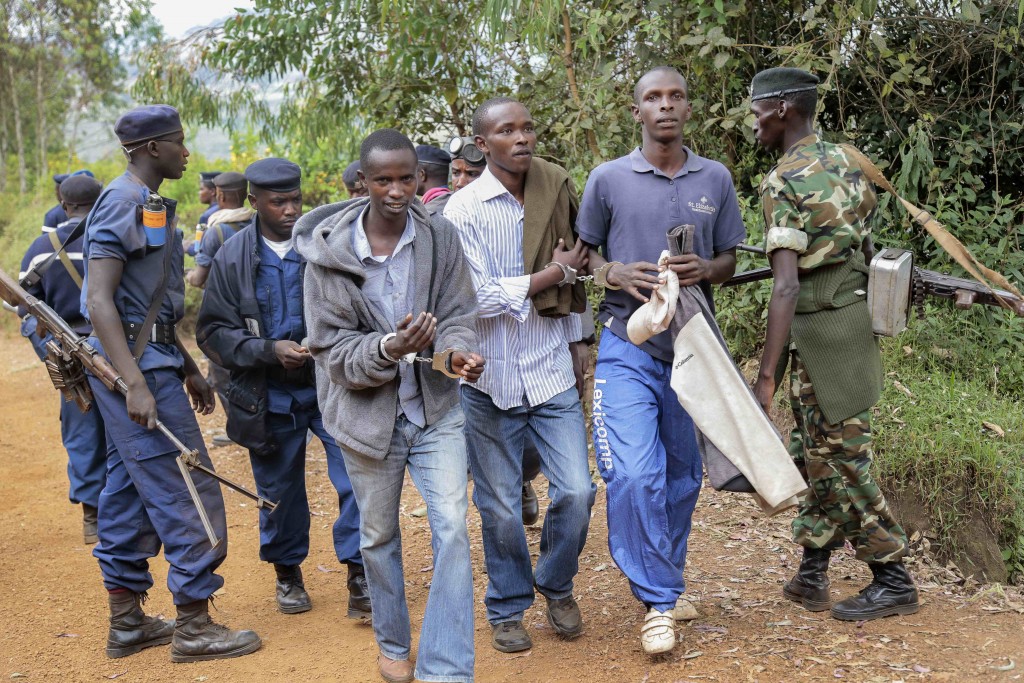 Three men walk in handcuffs after being arrested as organizers of an opposition demonstration, which was dispersed by police firing in the air, in Jenda, Burundi, Friday, June 12, 2015. On Thursday, a group of 17 political parties agreed to boycott elections in Burundi because they don't believe they will be free and fair, an opposition leader said. (AP Photo/Berthier Mugiraneza)

A Rwandan journalist has been arrested in neighboring Burundi and charged with espionage, the latest event in a wider crackdown on the press in the central African nation as President Pierre Nkurunziza seeks a third term in office.

Etienne Besabesa, a reporter for community radio stations and for the news website Igihe, was in Burundi on assignment for the Rwanda News Agency to report on the large number of people fleeing political violence in the country, the Committee to Protect Journalists said. He was arrested in the northeastern Giteranyi district of Burundi June 8, Agence France-Presse reported.

Officials confiscated his equipment and transferred him to a prison in the city of Muyinga.

"We charged him with spying because he was a journalist who sought information without accreditation," Giteranyi prosecutor Ernest Nduwimana said, according to AFP.

Since May, more than 30,000 Burundians have crossed the border into neighboring Rwanda to escape violence sparked by an unsuccessful military coup to remove President Pierre Nkurunziza, according to The Guardian. The coup came after Nkurunziza announced he was running for a third term, which many consider unconstitutional, and the Burundian government has violently suppressed public demonstrations.

The arrest is part of a countrywide crackdown on news media, which Burundian officials accuse of organizing anti-government protests. A number of Burundian radio stations were attacked in the capital of Bujumbura around the time of the coup when assailants threw grenades into the stations’ offices,  groups including Human Rights Watch said. Iwacu, Burundi’s most widely circulated newspapers, then shut down after it received numerous threats of similar attacks.