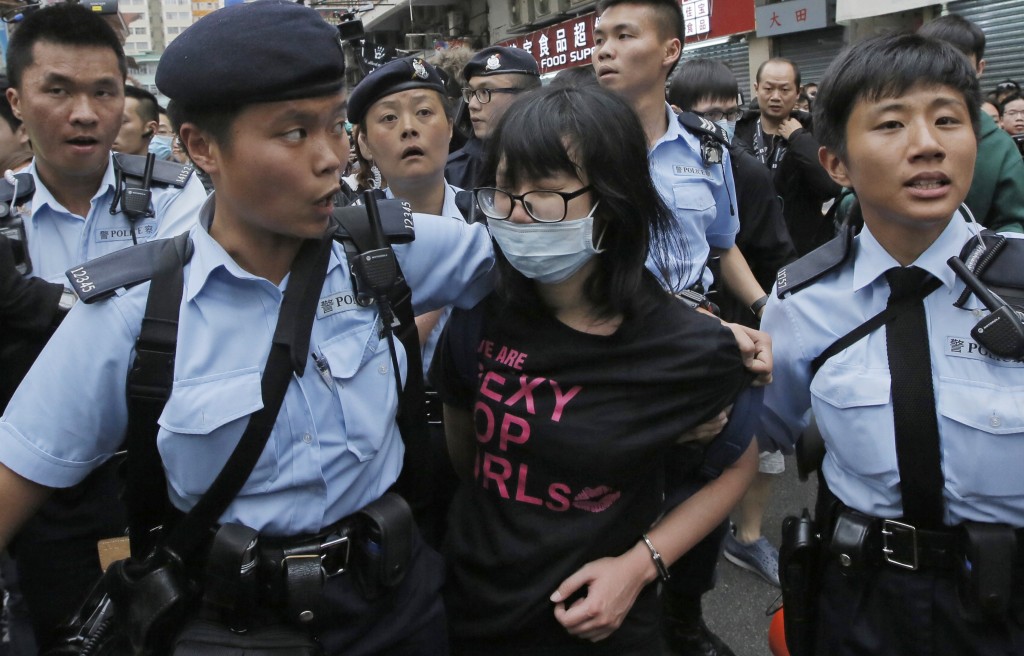 A protester is taken away by police officers after a confrontation between activists demonstrating against mainland Chinese shoppers and local villagers at a suburban district of Yuen Long in Hong Kong, March 1, 2015.  (AP Photo/Vincent Yu)

Hong Kong has long been known as a shopper’s paradise-particularly for people living in Shenzhen, a Chinese mainland city of 10.6 million just across a narrow river from the city. Beginning in 2009, immigration changes allowed Shenzhen residents to obtain multiple-entry visas to visit Hong Kong an unlimited number of times per year.

That helped fuel a surge in visits—with arrivals from mainland China reaching 47.3 million last year, up from 17.7 million when the new visas were introduced. Yet many of those visitors were so-called “parallel traders,” making day trips from the mainland to buy electronics, baby goods and pharmaceuticals in tax-free Hong Kong for resale on the mainland.

But since February, a series of anti-“parallel trading” protests have erupted in Hong Kong, leading to a drop in local tourism and new visa restrictions on people from Shenzhen.

The phenomenon follows the end of the “umbrella movement” democracy protests against mainland control, and is the latest evidence of tension in the one-country, two-systems model for Hong Kong. That tension was in evidence May 31 when as many as 3,000 people marched in Hong Kong to commemorate the 1989 Tiananmen Square crackdown, some bearing umbrellas.

Some in Hong Kong blame mainland Chinese for littering in shopping areas and complain of what they view as boorish behavior by mainland tourists. Mainlanders have been blamed for pushing up retail prices and causing shortages of some goods, and locals say stores catering to mainland shoppers have pushed up real estate prices and crowded out local businesses.

“We feel that we don’t have space to live,” says Ronald Leung, a spokesman for Hong Kong’s North District Parallel Imports Concern Group, a citizen’s organization, in an interview with Global Journalist. “Everyday when we go down the street, we see there are a lot of mainland people coming to our place, and we think that they are intruding.”

In one anti-trader incident in February in the Tuen Mun district, hundreds of protesters blocked shopping malls and chanted against parallel traders. Police used pepper spray and batons to break up the demonstrations and 13 people were arrested. In a separate protest March 1, 33 people were arrested.

But the demonstrators are fighting against the laws of supply and demand. In tax-free Hong Kong, the new Apple Watch sells for the equivalent of $553 while on the mainland it costs $675. Yet it’s not just high-value electronics and liquor that are bringing the traders, particularly since the 2009 loosening of visa restrictions on Shenzhen residents. China’s 2008 contaminated powder milk scandal, which sickened an estimated 40,000 babies, led to widespread loss of trust in Chinese food safety regulators and drove up demand for powder and other baby products like diapers from Hong Kong.

That left Hong Kong shoppers competing with parallel traders for a limited supply. “There has been an increase in numbers of pharmacies and shortages for baby formula at some stages,” Campbell Mok Ka Wai, a Hong Kong resident, told Global Journalist. A woman packs goods in front of a shop before taking them to the mainland China, at Sheung Shui district in Hong Kong, April 10, 2015. (AP Photo/Kin Cheung)

It also drove up rents as pharmacies catering to parallel traders took over shopping areas and rented Hong Kong apartments to use as distribution centers for their goods, says Wai.

Mainland and Hong Kong authorities have taken steps to address concerns. In 2012, more than 1,900 traders were arrested as part of a crackdown, most of them from the mainland. In 2013, Hong Kong imposed a four-pound limit on the amount of powdered milk allowed out of the county in an effort to ease shortages.

Following this year’s protests, the number of tourists to Hong Kong slumped. Mainland visits to Hong Kong in March declined 10 percent from the year previous, and 14 percent during the three-day Qingming Festival that ended April 6, according to Chinese state media. Those numbers aren’t likely to rise anytime soon. As of April 13, the multiple entry-visa for Shenzhen residents was eliminated, and replaced with a visa allowing one visit per week.

Leung, of the North District Parallel Imports Concern Group, says the change isn’t enough and likely won’t forestall future demonstrations. “It has been too long that our government does not do anything,” he says. That makes “Hong Kong people angrier and angrier.”

Yet stronger moves against traders also risk harming tourism to Hong Kong, a pillar of the city’s economy. Eric Chan Kwok-ki, director of Hong Kong’s immigration department, has warned that the anti-parallel trading protests have driven away tourists without reducing parallel trading.

For Hong Kong residents fed up with the influx from the mainlanders crowding their streets and pushing up rents, that may be a trade-off worth taking. “They think Hong Kong is their supermarket,” says Leung.