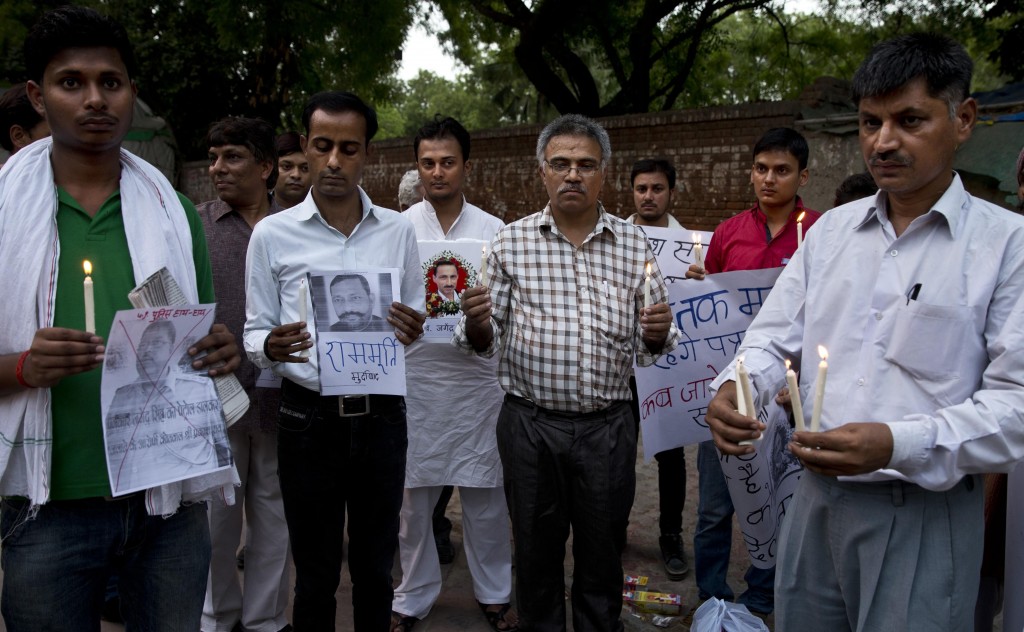 Indian journalists light candles in memory of freelance journalist, Joginder Singh in New Delhi, India Friday, June 12, 2015. Police are investigating into the death of Singh who was set on fire after he accused a state minister of being involved in illegal mining and land seizures in northern India. In a statement to a magistrate before dying Monday from burns covering 60 percent of his body Singh had implicated Uttar Pradesh state's dairy minister, Ram Murti Singh Yadav, as well as two police officers in the June 1 attack. (AP Photo/Saurabh Das)

A freelance journalist in India died June 8 from burn injuries sustained when police raided his home a week earlier. In his last words, Jagendra Singh accused police officers of dousing him with oil and setting him on fire, according to the Times of India newspaper.

In the weeks leading up to the June 1 raid, Singh wrote a series of articles on his Facebook pages that accused Verma of forcibly seizing lands and authorizing illegal mining operations on them for profit. On May 31, the day before the police raid, Singh wrote a post investigating accusations that Verma was involved in an alleged gang rape of a local woman on May 5.

Singh accused Verma of “unleashing a reign of terror” against him and his family. He said “the minister’s henchmen” broke his foot in an April 28 attack, according to the Committee to Protect Journalists.

"Ram Murti Singh Verma can have me killed,” Singh wrote in a May 22 Facebook post. “At this time, politician, thugs, and police, all are after me. Writing the truth is bearing heavily on my life. After exposing some of Ram Murti Verma's acts, he had me attacked..."

Family and other eyewitnesses confirmed Singh’s accusations, according to CPJ.

[They] “barged into our house and questioned my father about the posts,” Singh’s son Raghvendra told The Guardian. “They poured petrol over him and set him on fire.”

Officers initially claimed Singh tried to commit suicide when they arrested him, but opened a formal investigation after Singh’s family refused to conduct burial rites until police registered their complaint, according to Reporters Without Borders.

Verma and five officers were arrested and charged with murder, according to the Daily Mail, a British newspaper.

CPJ ranks India as the thirteenth highest country on its yearly Impunity Index, which highlights countries where journalists are murdered and the killers go unpunished.