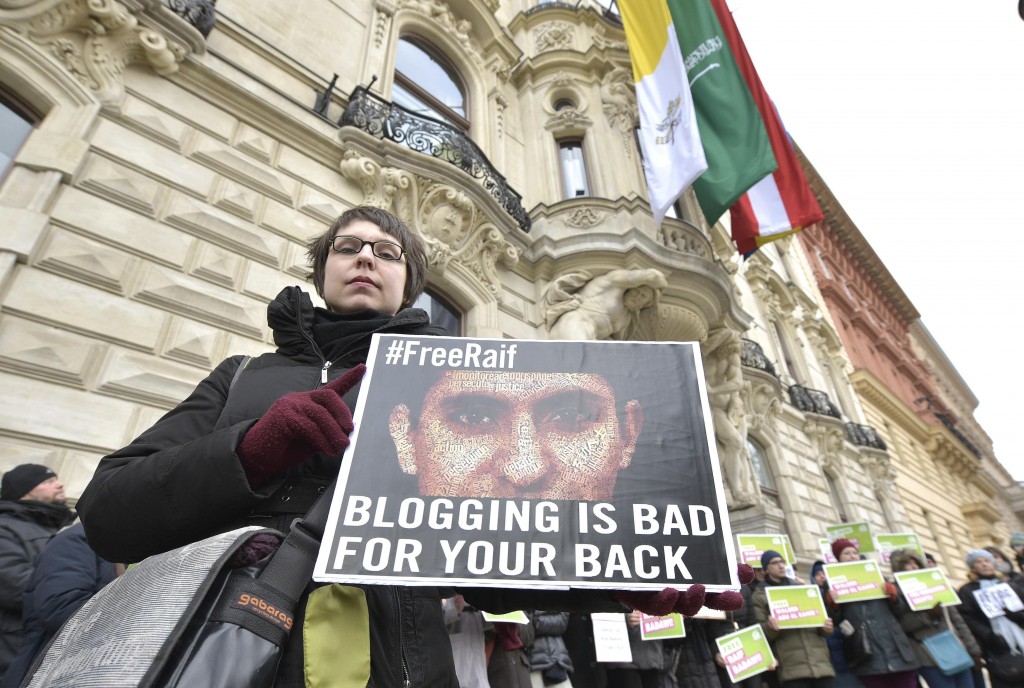 FILE - In this Friday, Feb. 6, 2015 file photo, members of the Austrian Greens protest against the punishment for Saudi blogger Raif Badawi in front of the KAICIID in Vienna, Austria. Saudi Arabia's Supreme Court upheld a verdict against a liberal blogger who was flogged in January after being found guilty of insulting Islam and breaking technology laws, state-linked news websites reported Sunday, June 7. (AP Photo/Hans Punz, File)

Saudi Arabia may resume the public flogging of a blogger convicted of "insulting Islam through electronic channels" after the country's Supreme Court upheld his sentence of 10 years in jail and 1,000 lashes. The whippings could resume as soon as June 12, NBC reported.

Liberal blogger Raif Badawi, a co-founder of the Saudi Liberal Network online discussion group, was arrested in 2012 and convicted in 2013. The site was shut down in 2012 after it published criticism of the country's notorious religious police.

On June 7, Saudi Arabia's highest court upheld the appeal of his sentence, news outlets including the Associated Press reported. Badawi received the first 50 lashes of the sentence in January a public square in front of a mosque in the western city of Jeddah. The punishment was halted following an international outcry and the Supreme Court review of his sentence.

"This is a final decision that is irrevocable," his wife, Ensaf Haidar, told Agence France-Presse in a telephone interview from Canada. "This decision has shocked me."

Amnesty International, which organized a movement to stop the flogging of Badawi, described the decision to uphold Badawi’s sentence as “a dark day for freedom of expression.”

“By failing to overturn the sentence Saudi Arabian authorities today have displayed a callous disregard to justice and to the tens of thousands of voices around the world calling for his immediate and unconditional release,” said Philip Luther, director of Amnesty International’s Middle East and North Africa program, in the press release, “Now that his sentence is final and cannot be revoked, his public flogging might start as soon as Friday and he will unjustly serve the remaining of his sentence.”