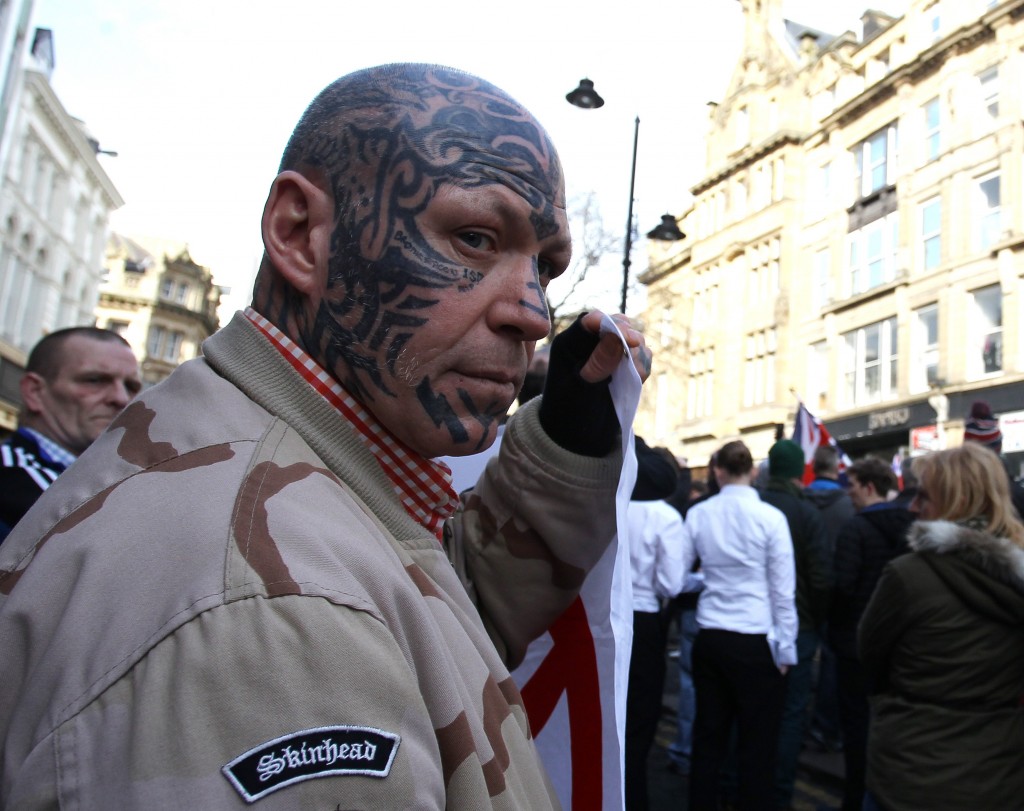 The recent mass-shooting at a historically African-American church in Charleston, S.C. has focused U.S. attention on the persistence of far-right groups like the Council of Conservative Citizens, a group said to have inspired alleged killer Dylann Roof. But far-right and overtly racist groups are not just an American phenomenon: they’ve also proven persistent in the United Kingdom, where concerns over immigration have fueled support.

The best-known far-right group in the U.K. is the anti-immigrant, anti-E.U. U.K. Independence Party, which won 13 percent of the vote in this year’s general elections, quadrupling its total from 2010. But UKIP has sought to shed its racist image as its popularity has grown. That’s left room on the fringes for a group of smaller parties that are more overtly racist or anti-Semitic and nostalgic for the fascism that swept Europe in the 1930s.

The NBU has its roots in a long history of far-right groups in the U.K., including the British National Party, which won dozens of local council seats in 2008-2009, and the National Front, a whites-only political party that had as many as 14,000 members in the 1970s. Its supporters wear the ‘blackshirts’ of Mussolini’s Italian fascists and the party’s manifesto claims that the “will of a freed people will replace the present tyranny of the vested interests and Alien minorities who are elected by none and responsible to none.”

The group lists 70 officers on its website from across the U.K. and foreign countries including the Netherlands, Italy and the U.S. In February, the group held a rally in an attempt to make Elgin, a town in the Moray region of the Scottish Highlands, into the U.K.’s first fascist town. In an interview with Global Journalist, the group’s leader, Gary Raikes, said he hoped to turn the small cathedral town into a template for how to build and expand a core of fascist supporters and lead a ‘Quiet Revolution’ across the U.K.

Though the February rally fizzled, Raikes says his group has big plans to expand. “Elgin was a blueprint to move onto other areas,” he says. “We’ve got 12 citadels now. One in Scotland, one in Wales, the rest all down in England.”

Whether the group can find traction remains to be seen. But Jean Urquhart, an independent member of the Scottish parliament, says that years of growing inequality have helped groups like the NBU. “Poor leadership, lousy economic policies, greater differentials between rich and poor and no real hope for the mass of people, then the fascists can find space,” she says. “The hungry are vulnerable.” Another of the far-right factions is the openly racist neo-Nazi group National Action, which consists mainly of men in their late teens and early twenties.

“We have a very basic principle we all agree on and that is a free white Britain – to be implemented by any means necessary,” says a spokesman for the group, who agreed to be interviewed on the condition that his name be withheld. “We would mete out people’s revolutionary justice by liquidating the London metropolitan elite and by expelling all non-whites from Europe.”

On March 21, a day the United Nations’ had declared the “International Day for the Elimination of Racial Discrimination,” the group organized a “White Man’s March” in the northeastern city of Newcastle. About 100 protesters attended and burned Israeli and gay-pride flags, according to Buzzfeed. They were met by about 70 counter-protesters.

“The counter-demonstration was very positive and friendly, celebrating Newcastle’s diversity,” says Max Bernhard, a reporter for the Jesmond Local who covered the event. As for the fascists: “They were quite happy about the media attention they garnered.”

Groups like the NBU and National Action harken back to the dark days of 1930s-style anti-Semitic populism. But a group calling itself the Patriotic Europeans Against the Islamization of the West, known or PEGIDA, is a new strain of far-right populism. Founded in Germany as a Facebook page, the group began holding rallies in Germany last year, drawing 25,000 to a march in Dresden in January in the wake of the Charlie Hebdo attacks in Paris.

In February, it held its first march in the U.K. in Newcastle, with about 400 PEGIDA protesters facing off against about 2,000 counter-demonstrators from a group called Newcastle Unites. Though there has been no follow-up demonstration, the PEGIDA U.K. Facebook page now has nearly 21,000 likes.

Still, even if counter-protesters continue to outnumber anti-Islam and white supremacist protesters in the streets, the far-right has succeeded in pushing the issue of tighter immigration restrictions into Britain’s political mainstream. In last month’s elections, even the centrist Liberal Democrats and center-left Labour Party campaigned on a platform of greater immigration limits.

The “racist far-right has never been eliminated,” says John Finnie, a member of the Scottish parliament from the pro-immigration Green Party. “It has ebbed and flowed since World War II and is perhaps on the ascendancy across Europe. Sadly, the mainstream parties pander to it by talking up immigration issues.”