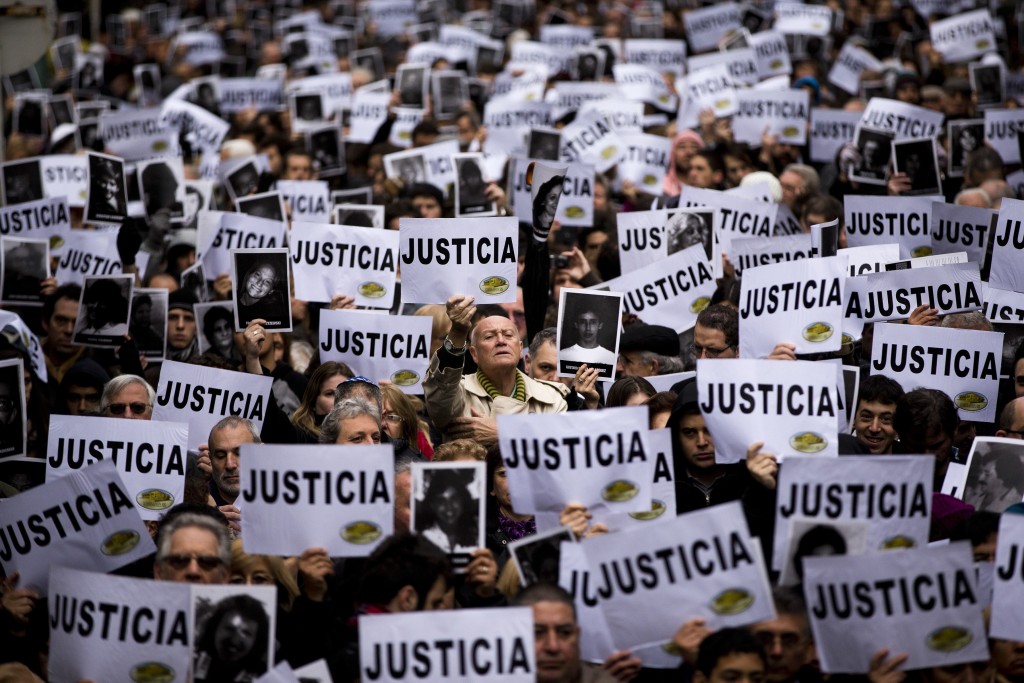 FILE - In this July 18, 2013 file photo, people hold up signs that read in Spanish: "Justice" and pictures of the victims of the bombing of the Argentine-Israeli Mutual Association community center on the 19th anniversary of the terrorist attack, in Buenos Aires, Argentina. In a statement released Wednesday, Jan. 14, 2015, Argentine Prosecutor Alberto Nisman, who is investigating the 1994 bombing of the Jewish community center, accused President Cristina Fernandez of reaching a deal with Iran to avoid punishing those responsible. (AP Photo/Victor R. Caivano, File)

Political fallout for Peronists from Nisman case is muted

Even under ordinary circumstances, it would appear Argentina’s ruling Peronist alliance would face an uphill battle in national elections in October. After all, unemployment is on the uptick, inflation is topping 20 percent annually and the U.N. reports the country has the highest rate of robberies per capita in Latin America.

But of course circumstances have been anything but normal. Argentine politics have been convulsed by the suspicious death in January of federal prosecutor Alberto Nisman, just days before he was to present evidence accusing President Cristina Fernández de Kirchner of covering up Iranian involvement in a 1994 bombing of a Buenos Aires Jewish center in which 85 people died. As many as 400,000 people took to the streets of the capital in Buenos Aires in February to demand justice for Nisman’s death. And yet in spite of the headwinds, Kirchner’s Peronist’s Front for Victory Party (FPV) is in a relatively strong position. Though Kirchner is barred by term limits from running again, Daniel Scioli, the Peronist standard bearer and governor of Buenos Aires province, is polling even or just ahead of opponent Mauricio Macri of the center-right PRO party. Provincial primary elections in April, the first since Nisman’s death, showed little evidence of a drop in Peronist support since the last election in 2011.

Boosting Scioli is a surge in pre-election spending. The government’s deficit rose to 4 percent of gross domestic product in 2014 from 3 percent the year previous, and in March Kirchner announced $340 million in spending on everything from bottled gas subsidies to discounted appliances, according to Bloomberg.

“They are creating artificial economic growth that is helping the government recover in this year’s polls,” says Eduardo Scibona, a business journalist for Argentina’s La Nación newspaper, in an interview with Global Journalist. “Many agree that public spending has to be reduced but not so many are willing to pay the price.”

In addition, the Peronists have sought to neutralize the political fallout from Nisman’s death. Nisman was found in his apartment with a gun on the floor near his body and the door locked from the inside–leading to initial conclusions that his death was a suicide. However doubts soon emerged given the timing of his death and the fact that there were no indications he might be suicidal. Kirchner supporters have sought to discredit Nisman by exposing his links with members of Argentina’s intelligence service and by leveling accusations about his private life. After his death, the Kirchnerist Sen. Salvador Cabral claimed Nisman was the victim of a homosexual crime of passion. The chief of Kirchner’s cabinet alleged Nisman used public funds to hire prostitutes. Kirchner herself has accused Nisman of conspiring against her with Jewish groups and U.S. financiers locked in a dispute with the government over debt payments.

“The government is always creating enemies and has only referred to Nisman to discredit him,” says Gabriel Pousa, an Argentine political analyst, in an interview with Global Journalist.

Still doubts about Nisman’s cause of death have only grown since the release of video footage of detectives apparently contaminating the crime scene by working without gloves. Four months after Nisman’s death, the lead investigator, Viviana Fein, has said she still hasn’t concluded whether Nisman’s death was a suicide or homicide. Additionally Nisman’s former partner, Arroyo Salgado, a federal judge, has repeatedly sought to have Fein removed from the case for political bias.

Together, these issues have led to an erosion of faith in the investigative process, particularly among Kirchner’s critics.

“Nisman’s case is a typical example of the ineffectiveness of Argentinian justice,” says Sergio Berensztein, an analyst who founded a political consulting firm in Buenos Aires. So far, Scioli has managed to distance himself from the scandal even as he’s been dismissive of Nisman’s findings of wrongdoing by the president. He’s been helped by a mild personal style that compares favorably to the abrasive Kirchner.

“Cristina tends to generate discord, she shouts a lot,” says Pousa. “But Scioli, despite being from the same party is much more conciliatory.”

Scioli’s challenge is to continue keeping his distance from Kirchner without alienating her supporters in the Peronist alliance ahead of primary elections in August. He’ll likely then have to shift course before national elections, given Kirchner’s low approval ratings nationally.

“Scioli wants to present himself as a change within Kirchnerism,” says Diego Dillenberger, the anchor of an Argentine political show called ‘The Machiavelli Hour,” in an interview. “After winning the primary elections, Scioli will come out and say he is not Kirchner.”