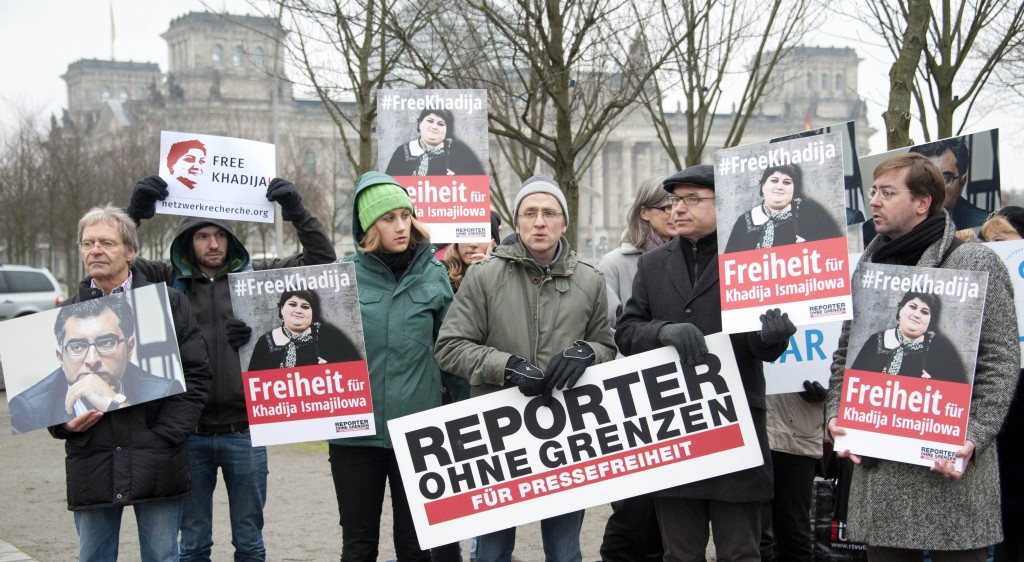 Demonstrators protest for freedom of the press and the release of political prisoners in Azerbaijan at the government district in Berlin, Germany, 21 January 2015. Reporters Without Borders called in for the protest on the occasion of Azerbaijani President Aliyev visit to Germany. EPA/CLAUDIA KORNMEIER

A prominent opposition journalist and human rights activist in Azerbaijan has flown to Switzerland after spending 10 months sheltering in the Swiss embassy in the capital Baku.

Emin Huseynov was flown out of the country to Switzerland July 12 on the plane of Didier Burkhalter, Switzerland's top diplomat, after Burkhalter attended the opening of the 2015 European Games in Baku, Agence France-Presse reported. Huseynov's departure came after months of negotiations with the Azeri government. His flight was facilitated by the Courage Foundation, a nonprofit affiliated with Wikileaks founder Julian Assange and National Security Agency whistleblower Edward Snowden.

The 35-year-old journalist and rights activist Huseynov was charged with "illegal entrepreneurship and tax evasion” in August 2014. Alerted to the possibility of his politically-motivated prosecution and imminent arrest, Huseynov went into hiding in August 2014. Switzerland allowed him to remain at its embassy for "humanitarian reasons."

Huseynov was previously detained in 2008. During that detention he was beaten and spent four days in an intensive care unit at a hospital. In May, the European Court of Human Rights found that Aliyev's government had committed three violations of the European Convention on Human Rights during the detention, including the prohibition of torture.

Azerbaijan has as many as 100 political prisoners, including prominent investigative journalist Khadija Ismayilova.