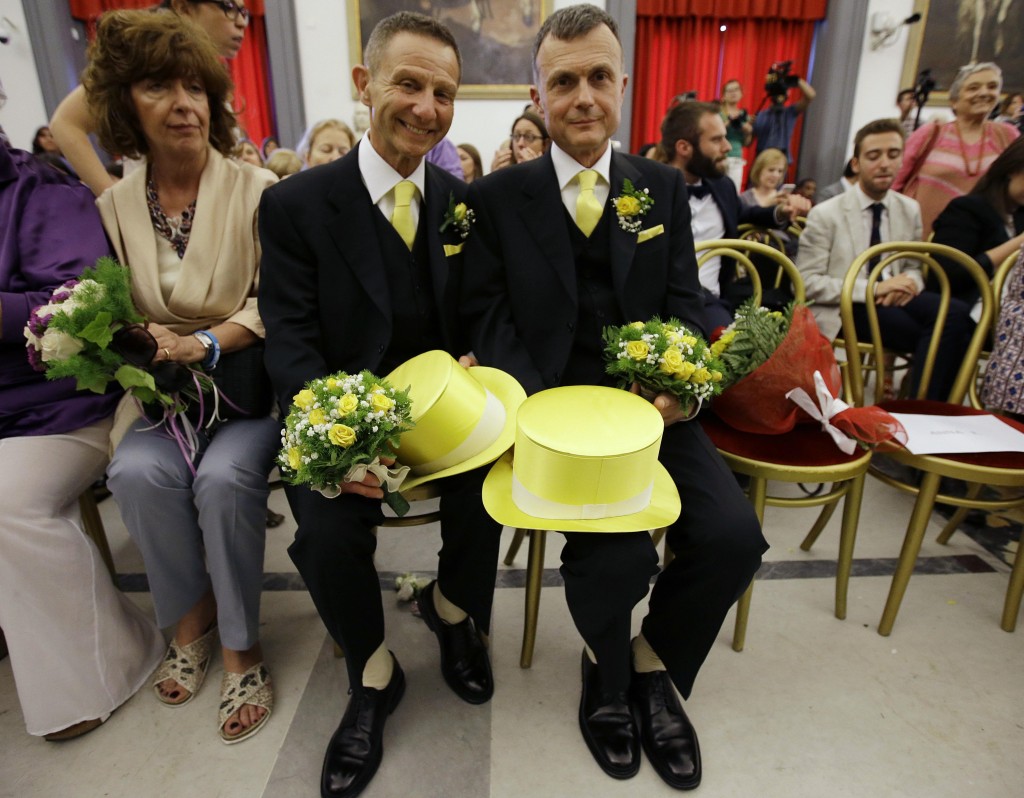 Angelo Albanesi, left, and Pier Giorgio De Simone wait for their civil union being registered by a municipality officer during a ceremony in Rome's Campidoglio Capitol Hill, Thursday, May 21, 2015. Rome's municipality registered some of 20 couples after the Capitol Hill assembly deliberated Jan. 2015, the creation of a civil unions' single register. (AP Photo/Gregorio Borgia)

For center-left Prime Minister Matteo Renzi, pressure is mounting. In March the European Parliament ratified a policy document encouraging members to reflect on same-sex marriage and civil unions as a “political, social and human and civil rights issue.” More than 200 cities and local governments in the heavily-Catholic country have created largely-symbolic same-sex union registries, and late last year Rome’s mayor defied the central government and recognized 16 same-sex marriages performed in other countries ­– though in February the country’s highest appeals court ruled the Constitution did not provide same-sex couples with a right to marry.

The Irish vote has given momentum to supporters of a civil union law now before the Italian parliament. Known as the Cirinnà bill, after one of its sponsors Sen. Monica Cirinnà, the proposal would give same-sex couples many of the rights as married couples. Notable exceptions are the right to jointly adopt children (though an unrelated partner would be allowed to adopt the biological children of his or her partner) and joint parental rights for children conceived through artificial insemination.

“I am trying to give some answers to the citizens who have been asking for their rights,” says Cirinnà, in an e-mail response to questions from Global Journalist. “…The law about civil unions is an obligation to our electors.”

Italian gay rights activists would like to see more. The goal is “a full law of equality between citizens, meaning marriage, adoption and everything heterosexual couples are allowed,” says Luca Trentini, the former national secretary of Italy’s Arcigay Association, in an interview with Global Journalist. Still, says Trentini, Cirinnà’s bill is “a good compromise.” A greater push from the European Union would be helpful in the quest for full marriage rights, says Franco Andrea Scioli, vice president of the gay rights association Renzo e Lucio, in an interview. What would be most effective would be to “make homosexual marriage an essential requirement to be part of the European community.”

Given that several members from eastern Europe, including Poland, have constitutional bans on the practice, that’s not likely to happen in the near future. And opposition to Italy’s civil union law from the Roman Catholic Church has been vigorous.

Monsignor Nunzio Galantino, the secretary general of the Italian Episcopal Conference, a grouping of Catholic bishops, has argued in an interview with an Italian newspaper that Cirinnà’s civil union bill doesn’t reflect the will of the Italian people and would generate confusion about the similarities of marriage of civil unions. “Family is an entity based on marriage of a man and a woman,” he told the newspaper. “…Whoever tries to legislate outside this institution is doing a sort of constitutional bullying.”

Conservatives in Italy managed to prevent a civil union bill from being passed last year, and have sought to bog down Cirinnà’s bill this year by adding thousands of amendments.

Still Renzi, the prime minister, has vowed to push forward with the civil union bill. And gay rights activists say momentum for its passage has become overwhelming, in spite of the Vatican’s opposition. A poll by the Italian daily La Stampa following the Irish referendum found that 67 percent of respondents favored civil unions, with just 27 percent opposed. As significantly ,51 percent favored legalizing same-sex marriage, with 41 percent opposed.

“I have the impression that this phenomenon is a swan song,” says Trentini. “We saw the same with opposition to abortion, divorce, feminism and sexual freedom. Moreover, even if the Church of Rome is officially against homosexual unions, many Catholic devotees agree that it’s a state’s duty guarantee those rights.”