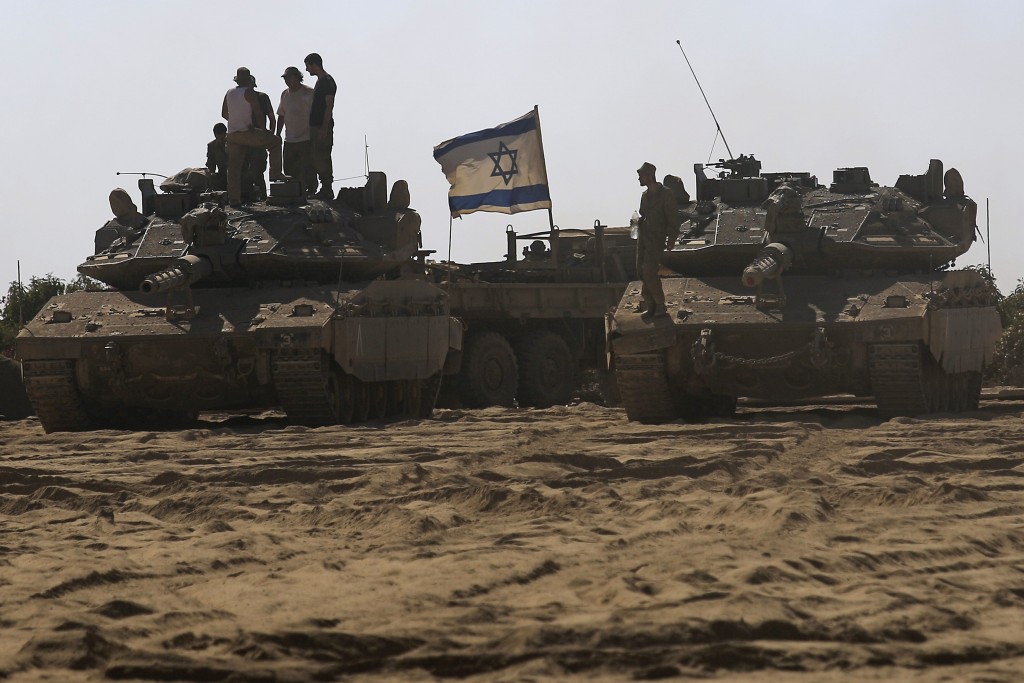 Israeli soldiers stand on top of tanks in a staging area near the Israel Gaza border, Aug. 2, 2014. (AP Photo/Tsafrir Abayov)

The surprisingly strong showing for Prime Minister Benjamin Netanyahu’s Likud and other right-of-center parties in Israel during elections this year raised the question: has Israel’s electorate fundamentally shifted right?

After all, Likud and its conservative allies have won every Israeli election since 2001. And Netanyahu’s victory in March came after he ran hard to the right in the closing days of the campaign – warning of Israeli Arab voters turning out “in droves” and vowing there would be no Palestinian state on his watch. Right-wing and ultra-orthodox parties won a total of 67 seats, compared with 39 for leftist parties (Arab parties won 14 seats). The reasons for the continued success of Israel’s right-wing parties are numerous, say journalists who have covered the country. There has been a demographic shift as Jews of Western and Central European ancestry, who are more likely to be left-leaning, have declined as a share of the population. Meanwhile public opinion towards sincere peace negotiations with the Palestinians has shifted since the 2000 to 2005 intifada. The ensuing outbreaks of conflict with Hamas and Hezbollah–not to mention the regional unrest that has followed the Arab Spring–has also left Israelis feeling more hawkish.

“The turmoil in Arab countries in recent years has certainly made Israelis a little more skittish about the security situation,” says Greg Myre, a former Middle East correspondent who is now NPR’s digital editor for international news. “Then there’s demographics, which are also a big factor…the people who tend to vote more conservative in Israel are growing in number.”

Patrick Strickland, a freelance reporter in the Middle East who has worked for VICE News and al-Jazeera English, says the shift to the right accelerated in the past six years with the election of Netanyahu as prime minister in 2009.

“We’ve seen a very, very sharp shift in the Israeli electorate,” he says. “You can see that reflected on the ground during the last war on Gaza [in July and August] for instance, you could see some rather outright racism at certain protests, right-wing protests. People chanting ‘Death to Arabs’ …and the incitement at times has kind of gotten out of control. There’s no doubt that they’ve continually moved rightward both in terms of the actual political leadership as well as the electorate.”

The changing Israeli political mood has had real consequences both for Israeli Arabs and Palestinians in the West Bank and Gaza, says Myre.

“We haven’t had real sincere, serious peace negotiations in almost 15 years,” save briefly under Ehud Olmert, Israel’s prime minister from 2006 to 2009, he says. “We’ve seen the issue of the Israeli Arabs who have complained about discrimination and a second-class status. I think that’s become a little more acute in recent years…Israeli politicians have attacked them a little more directly, the friction has increased a bit and so I think there are some issues there you wouldn’t have seen 15 to 20 years ago.” Dan Schueftan, director of the National Security Studies Center at Israel’s University of Haifa, sees things differently. Bias in the Israeli media has led to the perception of a shift in political views in the country, he says.

“The Israeli deep left is in control of the media, so media in the U.S. and in Europe have accepted the perspective of the Israeli left, and believe public opinion has turned to the right,” says Schueftan, who was an adviser to former prime minister Ariel Sharon. “The fact of the matter is that Israeli public opinion is congregating in the middle of the political spectrum.”

Schueftan argues that leftist parties like the Zionist Union have been punished for the failure of peace talks in the years following the Oslo Accords in the 1990s.

“The left has lost the confidence of the Israeli public opinion because it promised peace and whatever the left promised has proven to be unrealistic, particularly vis-a-vis the Palestinians,” he says.

Still, mainstream public opinion has adopted the once leftist view that the idea of a “Greater Israel” incorporating the West Bank into the Jewish State is unreasonable, says Schueftan.

Yet the election outcome, along with Netanyahu’s controversial decision to address the U.S. Congress in March over the objection of the White House, has highlighted a potentially long-term divide between public opinion in Israel and in the U.S., a divide that parallels the shift in attitudes towards Israel in Europe.

“There’s a younger generation of Americans, certainly on college campuses, where often they see Israel as the occupiers in the West Bank,” says Myre. “Israel is seen as the aggressor or occupier and I think Israel in the longer term is going to see a lot more pressure, and we’ve already seen it in Europe, and I think we’re starting to see it in the United States.” A makeshift tent stands near to the destruction of buildings at a residential neighborhood, in Beit Lahiya, northern Gaza Strip, Aug. 7, 2014. (AP Photo/Hatem Moussa)

That change likely won’t affect U.S. policy for years, as U.S. public opinion remains solidly pro-Israel. Yet in the shorter-term, Netanyahu’s vow to continue building Israeli settlements in the West Bank and the continued blockade of Gaza make a return to armed conflict with the Palestinians more likely–and renewed conflict risks accelerating the divide.

“The situation in Gaza today with it being 100 percent closed off, with the rare exception that Egypt opens the border or the rare exception that a Palestinian in Gaza can get a permit to pass through an Israeli border, is absolutely untenable,” says Strickland, who recently visited the Palestinian enclave. “People are very angry, upset. Gaza is running out of water. Food is scarce. I think we’re very, very likely to see conflict there in the next two years.”