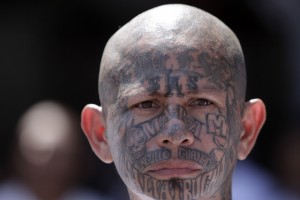 In this March 26, 2012 photo, an inmate belonging to the Mara Salvatrucha or MS-13 gang stands inside the prison in Ciudad Barrios, El Salvador. Six months after El Salvador brokered an historic truce between two rival gangs to curb the nation's daunting homicide rate, officials are split over whether the truce actually works. The gangs, which also operate in Guatemala and Honduras, are seeking truce talks in those countries as well. (AP Photo/Luis Romero)