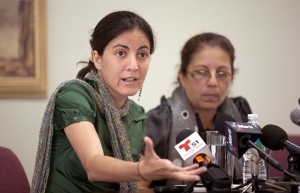 Rosa Maria Paya, daughter of late Cuban dissident Oswaldo Paya who died in a car crash, left, and her mother Ofelia Acevedo talk to the media about their family’s decision to seek political refuge in the U.S., in Miami, Fla., Tuesday, July 18, 2013. Paya traveled through Europe and the U.S. in April to push for an international investigation into the death of her father, who was killed in a car crash along with another dissident in 2012 in Cuba. (AP Photo/J Pat Carter)