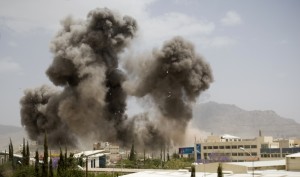 FILE - In this Wednesday, April 8, 2015 file photo, smoke billows from a Saudi-led airstrike in Sanaa, Yemen. With the combatants pounding each other in residential areas and Saudi-led coalition warplanes bombarding from the sky, Yemen’s war is wreaking a particularly bloody toll among civilians: more than 550 dead the past month, including at least 115 children, according to the UN. So far, relatively muted international outcry has put little pressure on the warring sides to stop. (AP Photo/Hani Mohammed, File)