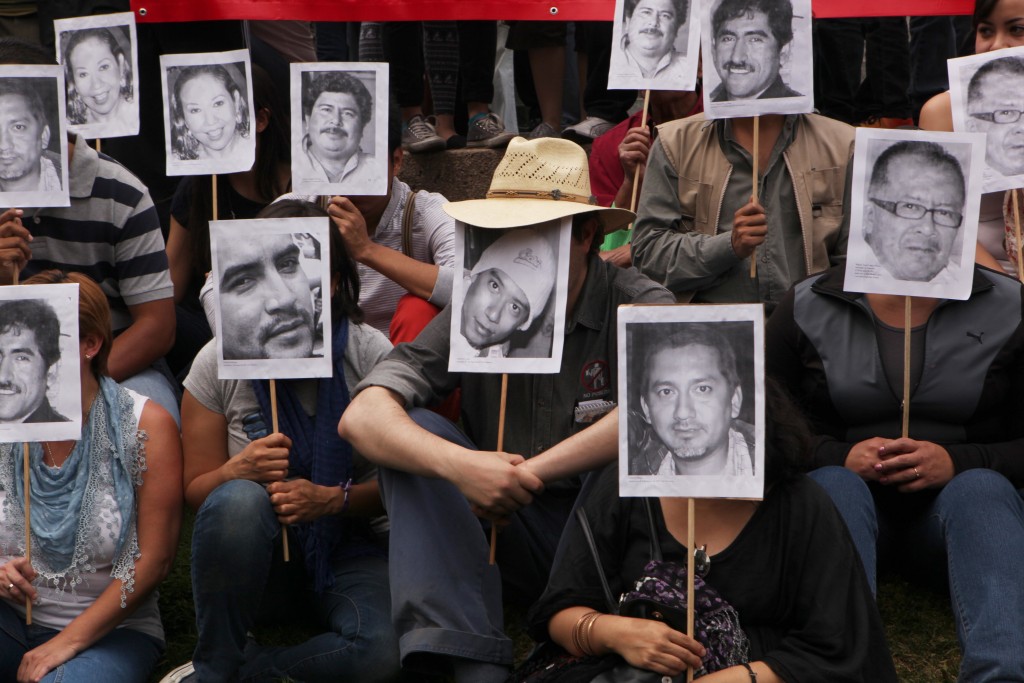 “If I go to restaurants, my family knows that I must sit in the back in a corner and far away from the windows, where I can have my back covered.”

Luis Horacio Nájera got into journalism because he loved basketball. Born in Guadalajara, Mexico’s second-largest city, he studied communication sciences at the Autonomous University of Nuevo León with the goal of writing about sports. But after graduation he was drawn to investigations of government corruption and drug-trafficking—two of the most important and dangerous subjects for Mexican journalists. He spent nearly two decades working for newspapers in Mexico’s border areas, the epicenter of cartel activity, for publications including El Diario de Juárez, El Diario de Monterrey and Norte de Ciudad Juárez.

Then in 2008, Nájera learned that his name was on a list of journalists targeted by the cartels and he decided to flee Mexico for Canada. His transition to life in Canada was not easy, and both Nájera and his wife had to work a series of low-paying jobs just to survive.

Now 44, Nájera recently earned a master’s degree in global affairs from the University of Toronto. A recipient of a Canadian Journalists for Free Expression [CJFE] award and a Hellman/Hammett grant from Human Rights Watch, Nájera spoke with Global Journalist’s Beatriz Ciordia about learning he was marked for death, cleaning restrooms as a refugee and why Mexican television news harms other journalists.

Global Journalist: You were a journalist for many years in Mexico. How difficult was it to find a job when you came to Canada?

Luis Horacio Nájera: It was really hard because I didn’t have permanent residence [status]…so it’s almost impossible to get a professional job.

Although I had a long career as a journalist in Mexico and my wife had worked in the human resources department of an international company for 12 years, both of us had to take “survival jobs” painting houses, cleaning restrooms and replacing window glass [for three years].

These jobs were not disreputable at all but the situation had an impact on us. I’ll always remember what happened when my wife and I worked cleaning a shopping mall in Vancouver. It was really hard work because there were three floors, 24 restrooms, a library and a nursery and we had to clean from midnight until 2 in the morning.

The worst part was cleaning the library because there was a hallway where all the newspapers were stacked. I always used to turn around while I was vacuuming in order to see the front pages and read the headlines. Mexico was a hot issue then, so I constantly found photos of my friends in Ciudad Juárez, the city where I used to live. I really missed my old job while I was cleaning that hallway.

GJ: Did you feel like people looked down on you or underestimated your abilities in Canada?

Nájera: Yes, many times. For example when I worked cleaning the offices of a car parts company, I used to listen to the conversations of the employees but I could never take part. I was just the cleaning guy. They said I was paid to clean and my opinion didn't count. Another time, after I received the CJFE award here in Toronto in 2011, a man offered me a job as a photographer for a magazine in Vancouver. I wrote my phone number on one of the event pamphlets for him. I was very excited because I saw it as a chance to improve my situation. Later, I went into another room and I saw the pamphlet with my phone number on the floor.

What I have learned is that you decide what to do with these experiences. I don't let this type of thing affect me too much. Although I've found really sympathetic people, some individuals remind you all the time that you were not born in Canada and your skin color is different.

GJ: When you were in Mexico, what kind of threats did you receive?

Nájera: One thing that is important to know is that criminals in Mexico do not threaten you directly until they are about to kill you. In my case I started to be constantly stalked in 2008. They began to follow me and my wife. We received strange calls and e-mails. Some people started to leave threatening messages and after a while they even began to show me the weapons they were carrying. Suspected members of the Arellano Felix drug cartel, stand next to displayed weapons during a presentation to the media in Tijuana, Mexico, March 15, 2010. (AP Photo/Guillermo Arias)

GJ: What was the moment you decided to leave?

Nájera: Many things happened at the same time. The most important incident was that somebody followed my wife outside the house and made a threatening gesture to her. When I realized that all the people around me were in real danger, I started to think about leaving. This incident was followed by a rumor about the existence of a blacklist with the names of 12 or 14 journalists that were targets of the drug cartels. Nobody knew exactly who was on that list, but a reliable source I had in the police told me that my name appeared on it.

GJ: Did you seek protection from the government?

Nájera: The protocol that exists in Mexico to protect journalists is completely ineffective. Journalists keep being attacked everyday and impunity has become one of the biggest problems in the country. If somebody kills a journalist, nothing happens because the government doesn't make any effort to look into the case.

GJ: How have you been affected psychologically?

Nájera: Although many people refuse to admit the consequences after putting their lives at risk, there are always side effects. In my case, although I was already used to living and working in a violent place, I started to suffer from insomnia. I was forced to learn new habits to feel safer. Now, for example, if I go to restaurants my family knows that I must sit in the back, in a corner and far away from the windows where I can have my back covered. In general, I'm always more alert to the things that happen around me.

GJ: What's the attitude of Mexicans towards threats to journalists?

Nájera: I don't see a strong response to the situation for journalists. They don't support them and they don't understand these attacks. It was sad for me to see that only activists, journalists and some politicians took part in a demonstration in 2011 in Mexico City against the murders of journalists.

Something very interesting is happening in Mexico. There's a growing part of society that does not trust journalists because the largest media groups in the country, like TV Azteca or Televisa, are controlled by the government, which manipulates and censors some information.

If people on TV are corrupt, then all journalists are seen in the same way. Credibility is gone and people criticize the lack of trustworthiness of the media. In the north of the country, the power does not belong to the government but to the drug cartels, who kidnap and murder reporters in order to stop the publication of certain articles.