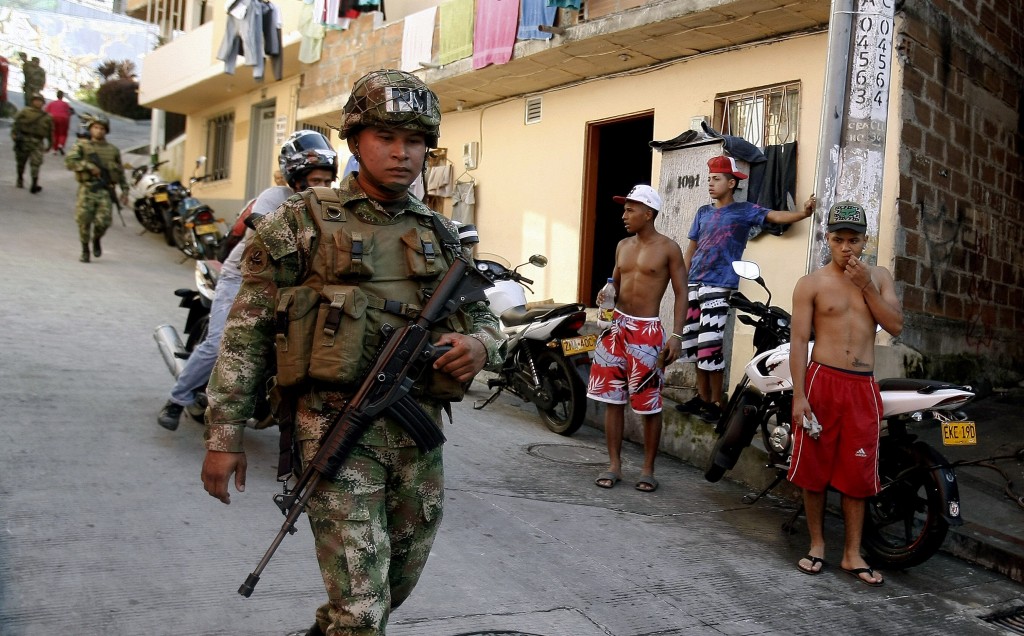 Colombian soldiers patrol the streets of the Comuna 13 suburbs prior to the presidential elections in Medellin, Colombia, May 24, 2014. (EPA/LUIS EDUARDO NORIEGA)

"I have three bodyguards that come with me everywhere, I always use an armored vehicle."

In 2011, Colombian journalist Mary Luz Avedaño published two investigative pieces about drug cartels in her home city of Medellín. Avedaño, 40, had hoped her articles in the newspaper El Spectador would have an effect on a city where the combined effects of corruption and drug trafficking have resulted in Medellín having the highest murder rate in the country. In her first article published on May 18, 2011, Avedaño reported on links between drug traffickers and local police, a connection known as "polibandas" [police gangs]. One month later, three police officers were fired and the authorities opened an investigation into another 120.

Soon afterwards, Avedaño published a second article featuring Henry de Jesús López, a high-ranking drug cartel figure known as “Mi Sangre,” that detailed alliances between various traffickers. Both stories were to be published without a byline, but in an egregious error, her name appeared above the stories in both print editions because of production errors.

Soon Avedaño began receiving calls from her sources warning her that she was in danger. Warnings turned into threats. Local authorities investigated and warned her that traffickers were targeting her. That led Avendaño leave her family and spend two years living overseas, aided by press freedom groups. She has since returned to Colombia, and told Global Journalist's Hong Zhao about the challenges of traveling with bodyguards and the loss of self-worth that accompanied her exile.

Global Journalist: How did you know it was time to leave Colombia?

Avedaño: After I published this last article about drug dealers I started to receive threats on the phone. Some sources that I had were really close to the drug cartels and they informed me on a current basis about their plans to attack or threaten me...The police chief of Medellín organized a meeting with the Press Freedom Foundation, an organization in Colombia, and he told the organization that my personal safety could not be guaranteed even if I had 50 bodyguards.

GJ: How did you get out of the country?

Avedaño:  Due to my level of risk...the only place I could go to was Peru. CPJ [the Committee to Protect Journalists] took care of me. I stayed for six months in Peru because I had to wait to have access to the journalist protection program in Spain, which was offered by Amnesty International. I started to need psychological help when I was in Peru due to the trauma I had in Colombia. [At first]  I could only tell my family what was happening, but later, when I was already out of the country, the Press Freedom Foundation gave a statement in which they told the country that I had successfully left Colombia.

Avedaño: It’s not easy to radically change your life from one day to another. I had to go to a different country on a different continent, leave my family and drastically change my lifestyle. I remember that, in Spain, I used to stop in the middle of the street and feel extremely insignificant.One day I had a house, a family, a dog, a job and many friends, and the next day I was nobody.  The worst thing was realizing that I had to flee Colombia not because I wanted to, but because other people forced me.

I didn’t let anybody get close to me. When I was traveling around Spain and attending meetings ... I didn’t feel safe with the people that attended some of the conferences. I was almost convinced that some were members of Colombian paramilitary groups–because many of them are living in Spain. Although the level of security in Spain was much higher, I had to be alert all the time to the things happening around me.

Avedaño: I wanted to go back to my country and my home. I took into account all the problems that I had to face and decided to come back to Colombia and try to improve my safety there. When I came back, [the police] provided me with a strong safety protocol that allowed me to be more comfortable than before. We decided that, if we could handle the situation, I’d stay, but if my level of risk was the same I would leave again. Luckily I’ve been able to stay thanks to the safety protocol.

I have three bodyguards that come with me everywhere, I always use an armored vehicle and we always check if somebody is following me when I go out or if there are cars parked close to my house. I can never feel absolutely safe and calm because I need to be alert all the time.

GJ: How is it working again as a journalist in Colombia?

Avendaño: I’m working again for El Espectador, the newspaper I used to work for before leaving Colombia, but I don’t write about the same issues. I write about about things the newspaper has already scheduled, like cultural issues, [feature] stories... sometimes I write about the Colombian conflict [with leftist guerrillas] but just focusing on the personal stories of the victims.

with assistance from Beatriz Ciordia