Photo essay: "There is no such thing as safety in Syria" 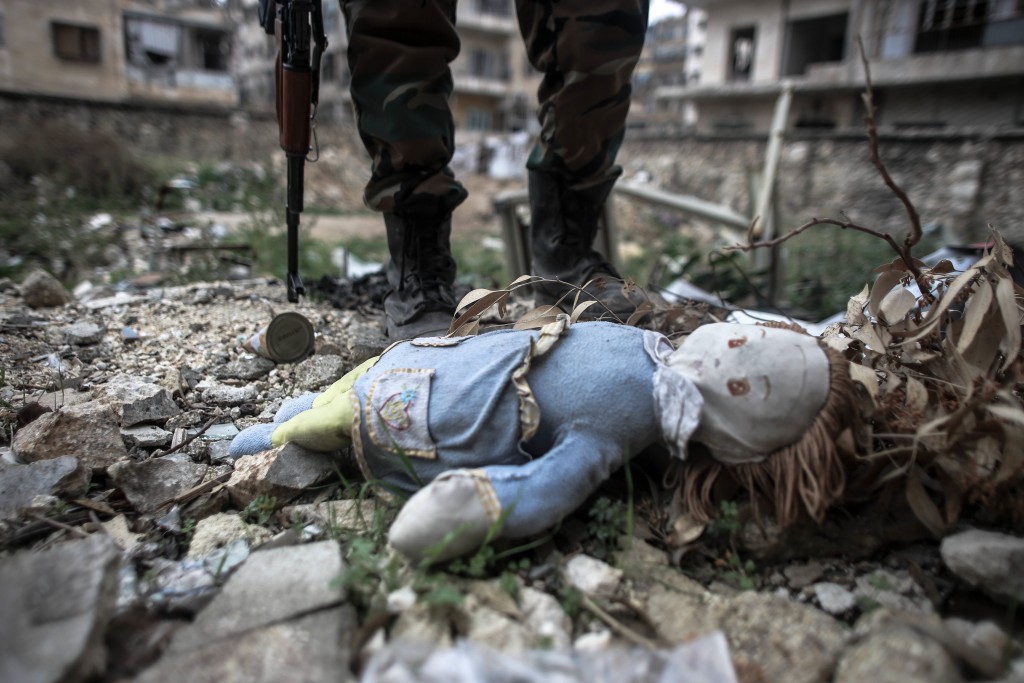 A damaged doll seen in the Busatn al-Qasr neighborhood of Aleppo during fighting between al-Qaida and pro-Assad forces in Syria. (Ibrahim Khader)

There is a paradox about Syrian news. It's among the stories that's received the most coverage globally – and yet very few international journalists can report from inside the country.

One of those who has been inside Syria regularly is Ibrahim Khader, a Palestinian photojournalist who has made dozens of trips  during the country's three-year civil war.

Khader, who works for the Pacific Press Agency and the online news site Middle East Eye, previously covered the conflict in Gaza between Hamas and Israel in 2012 and 2014. Covering Syria, he says, is "one of the most dangerous and the most beautiful experiences" in his career.

He spoke with Global Journalist's Hong Zhao about traveling with al-Qaida, surviving firefights and the haunted feeling of deserted settlements in Syria. An Al-Qaida fighter inside a tunnel near the Air Force Intelligence headquarters in Aleppo, during fighting with pro-Assad militias. (Ibrahim Khader)

Khader is based in the Turkish border town of Gaziantep and makes trips to Syria that can last several weeks. His first journey was in 2014, when he traveled to Aleppo under the protection of al-Qaida fighters battling Syrian militias loyal to Syrian President Bashar al-Assad and his allies from Lebanon, Hezbollah. “I was very scared, you hear the sound of shots very near to you and watch the smoke rising close by,” says Khader. “At that time I felt that death was as close as I ever imagined.” From Aleppo, Khader traveled to the northern settlements of Nobol and al-Zahra, where Shi'a forces from Iran and Lebanon supporting Assad had concentrated. Al-Qaida fighters take positions near the Shi'a village of al-Zahra in northern Syria during combat with the Lebanese militia Hezbollah, Dec. 3, 2014. (Ibrahim Khader)

"All the cities I entered were like the cities of ghosts," says Khader. "One of the [fighters] said to me, 'you can choose a house to sleep in today.' All the houses were empty because their owners left." A Syrian child walks near the front lines of fighting between the Free Syrian Army and pro-Assad forces in Aleppo, Dec. 2, 2014. (Ibrahim Khader)

Khader says he was kidnapped twice in one reporting trip. In one instance he was held by al-Qaida after he criticized a member of the group. He managed to escape and was taken in by members of the Free Syrian Army, a moderate opposition militia. However after finding out Khader was a Palestinian from Gaza, they held him on suspicion of being an Israeli intelligence agent. Eventually they escorted him back to Turkey. "There is no such thing as safety in Syria, all means of safety fail," he says. "A barrel [bomb] or a missile or even a bullet may kill you when you're in the car or walking." A female fighter from the Kurdish People's Protection Unit, or YPG, prepares for battle with militias from the Islamic State in the northern town of Kobani, Nov. 7, 2014. (Ibrahim Khader)

Khader says he cannot afford a helmet or flak jacket to wear when working in a war zone. In one instance when Khader was crossing the border from Turkey to Syria, his group came under heavy fire from the Turkish army. He was certain he would die. "Luck gave me another chance to live," he says. Unsurprisingly, the group Khader fears most is the Islamic State. "They believe that every journalist is a spy and should be killed quickly," says Khader. The enduring nature of the Syrian conflict, now in its fifth year, is what sets it apart for Khader. ""The situation has become hell," he says.