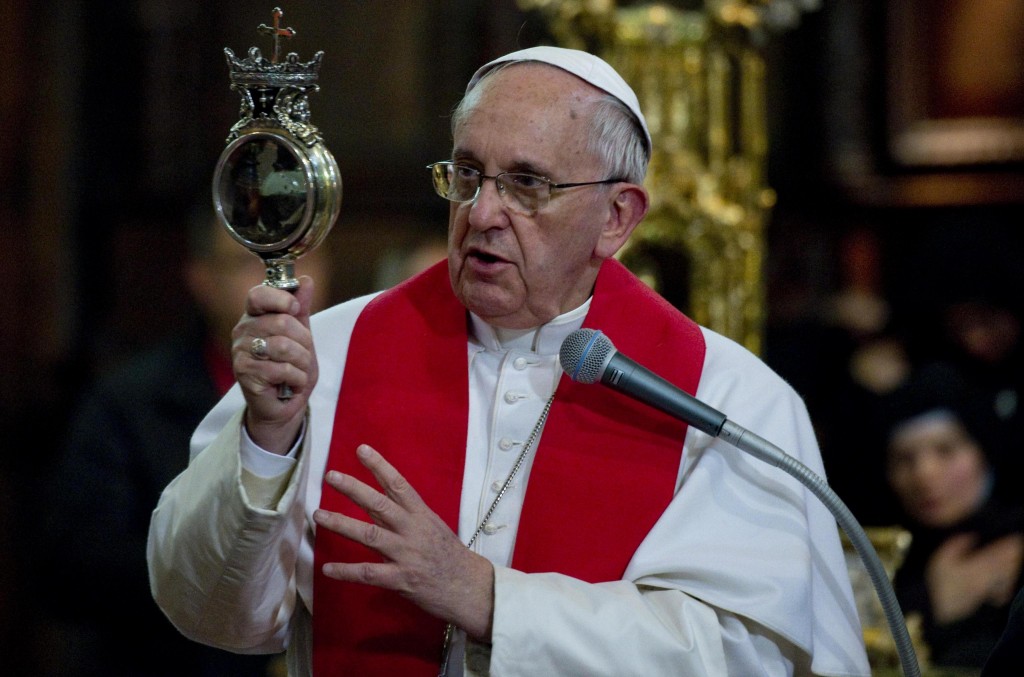 People say a lot of things about Pope Francis.

They say he is an extrovert in comparison with the introspective Pope Benedict, who preceded him. Some say he is a reform-minded antidote to Benedict’s staunch conservatism. Others say he is not all that different from his predecessor. Some argue that he is a skillful politician at heart.

But some journalists for Catholic news services say the secular media cannot quite get him right.

“He is more of an extrovert; he uses imagery and metaphors,” says Matt Hadro, a correspondent for the Catholic News Agency in Washington, D.C. “Because he has a very different style, people assume that this papacy is different from previous papacies. It’s actually not so. There is continuity there.”

One issue, says Charles Collins, a correspondent for Radio Vatican in Vatican City, is that the media and the public have been quick to try to fit the pope in a particular ideological box.

“A lot of people project themselves onto Pope Francis,” he says. “I think that Pope Benedict was seen as a conservative figure, whereas Pope Francis is seen as a progressive figure. And in both cases it’s not quite true.”

In October, Pope Francis made headlines worldwide when he told an audience at the Vatican that evolutionary theory and the Big Bang are not inconsistent with the Bible. In fact, as Newsweek and some other outlets reported, Pope Pius XII had opened the church to discussions of evolution as far back as 1950. Both Pope John Paul II and Pope Benedict had also spoken supportively of evolution, even as they argued that the soul was bestowed on humans by God even as evolution may have shaped other aspects of life.

“The world press went crazy saying that Pope Francis supports evolution,” says Collins. “While his predecessors had done the same. But that was the kind of story that people wanted to know. They want to show a big change.”

That also goes for Francis’s famous comment about gay priests to reporters on a plane in 2013. "If someone is gay and is searching for the Lord and has good will, then who am I to judge him?” Francis said at the time.

Hadro says that Pope Francis’ comments about homosexuality do not stray from the church’s message.

“That statement was really just reflecting church teaching of the gospel which is that we must make judgments about whether or not an action is wrong, good or bad, but we must never judge the condition of another person’s soul,” Hadro says.

Francis has also been widely hailed for his effective use of social media. With nearly 20 million followers, the former archbishop of Buenos Aires is the most popular religious leader on Twitter (though still far behind President Obama’s 57.5 million followers). He speaks about the Internet with reverence and even provided a bit of practical advice for social media users, encouraging them to be deliberate before posting and not to insulate themselves within a self-reinforcing echo-chamber of like-minded individuals. What many people may not realize is that despite the huge online following for @Pontifex, Francis is neither a papal pioneer on social media nor a user himself.

“Behind the scenes, Pope Benedict got the technology going with the Vatican,” says Carol Glatz, a Rome correspondent for the Catholic News Service. “He approved all the structures as this technology emerged and Pope Francis came along and continued with his content.”

Indeed an entire department within the Vatican is devoted to managing the Twitter account of the pope as well as his other media strategies.

“He doesn't use Twitter,” says Collins. “He doesn't retweet people. He is not the one using media, but he puts himself in the media.”

Reporters say that Pope Francis has made their job easier. “He just hands you a lead,” says Glatz. “Whereas with Pope Benedict, he is such a profound theologian, professor-type, his work and his speeches were so deep and so important they were not accessible to most people.”

Francis’s accessibility and tendency to hold free-wheeling press conferences, as opposed to his predecessor’s more scripted meetings with reporters, has provided scribes with a steady diet of stories.

“He drives a lot of headlines,” says Hadro. “He is an extravert. He loves to speak; he loves to use metaphors. The way he speaks is less academic but more human. He makes a lot of news.”

How much longer Francis can continue to charm reporters and the public remains an open question. But the pope, 78, has already indicated he may not linger on the world stage.

“I have a feeling my pontificate will be brief,” he said in a recent interview with Mexico’s Televisa channel. “Four or five years, I don’t know. Two years have already gone by. It is a vague feeling I have that the Lord chose me for a short mission.”

Sabrina Zaho and Lucrezia Lozza contributed reporting to this.