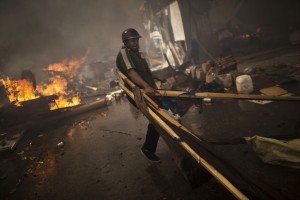 FILE - In this Wednesday, Aug. 14, 2013 file photo, A supporter of ousted Egyptian President Mohammed Morsi carries wood to burn in a fire barricade at the sit-in at Rabaa Al-Adawiya Square in Cairo's Nasr City district, Egypt. The scene on Aug. 14, 2013, was the start of the biggest massacre in modern Egyptian history, as security forces crushed the sit-in by Islamist supporters of Mohammed Morsi, the elected president who had been removed by the military a month earlier. At least 624 people were killed during 12 hours of mayhem in Cairos Rabaah el-Adawiyah Square, though rights groups have said the toll may be several hundred higher. (AP Photo/Manu Brabo, File)