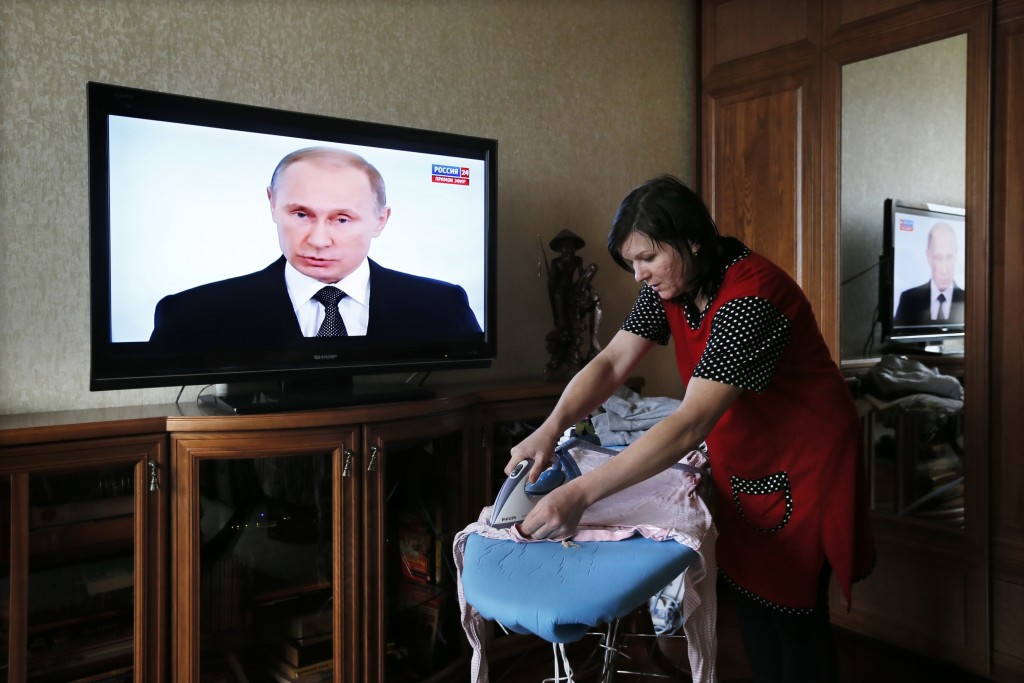 Russian, Ukrainian and Western media have all taken heat for reporting

As Russian-backed rebels have advanced across eastern Ukraine, they’ve had a key ally who hasn’t fired a single-shot: Russian media.

In July, Russia’s state-owned Channel 1 broadcasted a report from a woman described as a refugee who told a vivid story of Ukrainian government forces crucifying a 3-year-old child in the central square of the city of Sloviansk after capturing it from pro-Russian separatists. The Ukrainians then tied the child’s mother to a tank and drove around the square with her on display.
The story was false – pure propaganda, though Channel 1 has never corrected it.

Evgeny Feldman, a photographer for the Russian newspaper Novaya Gazeta was in Sloviansk the day after the public child crucifixion supposedly happened, and says no one there had heard of it.

“I’m still meeting people on the separatist side who said they decided to join the forces of the separatist republics after they heard this story,” he says. The story is part of a “special narrative of comparing Ukrainian forces to the fascist forces who were fighting against Russia in World War II.”

The war in Ukraine has generated much criticism of media. Ukrainian media has been blamed for failing to report the early phases of the war and for offering a one-sided view of the conflict. Western reporters have been accused of failing to report key facts about the conflict or for demonizing Russia in an effort to draw parallels to the Cold War. Russian television and state news have been criticized not just for broadcasting fake stories but for seeking to whip-up anti-Ukrainian sentiment among Russian-speakers.

Nor is every Russian outlet a medium for Kremlin propaganda. Though Russian television and state news services have served as cheerleaders for the war in Ukraine, other outlets, particularly on the Internet, have offered alternative views. Novaya Gazeta, for instance, recently published what it said was a Russian government document showing plans for Russia to annex Crimea and part of southeastern Ukraine in early 2014, weeks before Ukraine’s pro-Russian former president Viktor Yanukovych was forced to resign by mass protests in Kiev. They're part of a small group of media outlets that offer a narrative at odds with that of Putin.

“They can afford to be honest, be on the spot and cover both sides of the issue,” says Feldman. “But that doesn’t mean that there isn’t any pressure on them: the government can shut them down [any] day.”
Riley Waggaman, an American who is deputy editor of the pro-Kremlin news site Russia Insider, argues that it’s wrong to equate all Russian media with propaganda.

“Russian media has a perspective that is quite different than what you get in the West,” says Waggaman, who says he does not watch Russian television. “I don’t think that it means that is across-the-board propaganda though.”

It’s not just Russian and Ukrainian media outlets that have come in for criticism for their coverage of the war. Christo Grozev, a Bulgarian media investor based in Austria with investments in Ukrainian media, says mainstream Western news outlets are also failing to report key elements of the conflict.

“Unfortunately what I’ve seen is mainstream media has followed only the most obvious narrative and [followed] official statements from Russia and Ukraine,” he says. “That totally doesn’t give them the real picture.”

Grozev and others have posted videos and pictures of what they say is proof of Russian soldiers operating on the ground in eastern Ukraine – something President Vladimir Putin has denied.

Outlets such as the BBC “have totally become blind to obvious proof and evidence to Russian involvement and Russian soldiers being on the ground in Ukraine, and they continue to use terminology [like] just ‘rebels’ and ‘local separatists,’” he told Global Journalist.

Others take a different view. Jonathan Alpeyrie, an American photojournalist who has covered the war for outlets including CNN and Vanity Fair, says that the Western media has demonized Putin and Russia. Western journalists often have a poor understanding of Russian history and what Russia wants for Ukraine and their country in the future. I don’t think Putin wants to be our enemy and the way the press portrays him is highly inaccurate,” he says. “He’s a more traditional leader, and he doesn’t transcribe well into how we view leaders here in the Western world.”

Feldman, the Russian photographer for Novaya Gazeta, sees another culprit.

“If it wasn’t for Russian TV and Russian media, there would be no war at all,” he says.