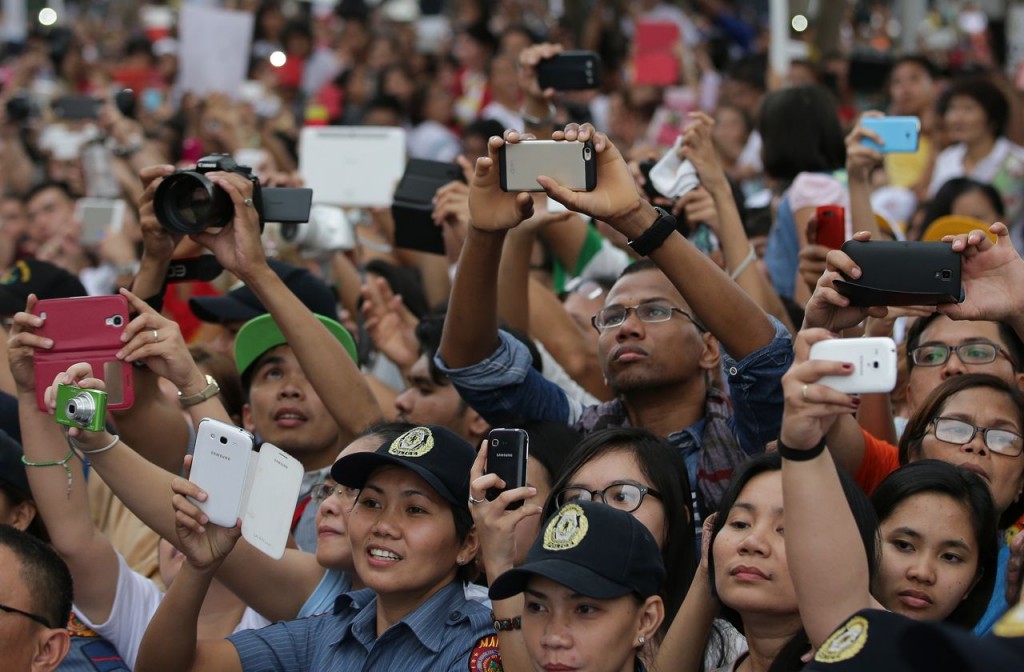 The Internet has disrupted the news business all over the world, allowing news organizations like Huffington Post that didn’t exist a decade ago to draw more eyeballs than the sites of the New York Times or CNN.

But to look at the future of online news, it’s worth examining Rappler.com, a social news start-up based in the Philippines.

Rappler started as a Facebook page in August of 2011 and then moved to its own website in January of 2012. By 2013, it had become the third-most popular news site in the country of 108 million. Founded by Maria Ressa, a former CNN correspondent in Southeast Asia, with a team of journalists in their twenties, Rappler has mixed social-media responsive news stories with short videos and crowd-sourced news projects to upend more traditional news sites.

“We wanted to build communities that care about solving the problems that have been there for the last 30 years,” says Ressa.

One key feature has been a mood meter that polls the audience’s emotions to a given story. Ressa says some of the ideas for utilizing social media came after watching how fast the ideology of radicalization and terrorism could spread through sites like Facebook and Twitter. “So we figured if you could deconstruct this process, why can’t you use that same process for good?” says Ressa, in an interview with Global Journalist.

The Philippines is an unlikely hub for social media. After all, by some estimates just 42 percent of the population utilizes the Internet–no surprise in a chain of islands where more than half the population lives in the countryside.

But those that are online are busy connecting with each other. Fully 93 percent use social media, the highest rate of the 31 emerging economies measured in a recent Pew Research Center study, and well above the 74 percent of Americans online who use social media.

Rappler has larger ambitions than being just a news site. It’s also trying to become a platform for civic activists who can change society.

“This new technology, social media in particular, allows you to connect directly to the people who read and who watch what you are creating in journalism and then allows you to just go beyond just telling stories, you can actually move your society to action,” says Ressa.

One effort has been Project Agos, an online interactive news and mapping tool that uses crowdsourcing to provide instantaneous updates about natural disasters. In a country still recovering by the devastation wrought by Typhoon Haiyan in 2013, it provides information about weather, disaster-preparedness and relief efforts from both official channels and users.

A second initiative is Move.ph, Rappler’s citizen journalism initiative, which allows activists to try to engage with others to build movements for social change. Recent articles have covered censorship of school graduation speeches, the difficulties of teenage girls displaced by fighting between the government and Islamist rebels in Mindanao and the threat of species extinction posed by deforestation. Ressa describes the authors as storytellers with a purpose. “They see the problems in the stories, and then they want to funnel them to action,” she says. A Filipino woman sits on a bicycle as she uses her smartphone in Manila, Jan. 28, 2015. (AP Photo/Aaron Favila)

But with all the emphasis on activism and civic engagement through social news, huge challenges remain. Television and radio remain the main sources of news in the Philippines. Internet connectivity remains too slow and expensive for the whole country to join the conversation, says Danilo Arao, dean of the University of the Philippines journalism department in an interview.

“For example, if something goes viral on the Internet, a majority of Filipinos would only get to know it if it gets covered by television,” he says.

Furthermore, innovation on the Internet doesn’t insulate Rappler’s journalists or users from traditional threats to the press. The country ranks 141st out of 180 countries on Reporters Without Borders 2015 World Press Freedom Index. Since 1992, 77 journalists have been killed for their work in the country, according to the Committee to Protect Journalists.

Though the country is democratic and press freedoms are protected by law, its institutions remain weak. “This particular culture of impunity infringes upon the responsible practice of the profession in the sense that people can get away with murder,” says Arao.

Some in government also view social media as a threat, allowing news of political scandals to spread much more rapidly than before, says Bryant Macale, program director of the Philippines Press Institute. “I think they are already realizing the power of the Internet to make or break reputations, which for them is an important factor in maintaining their political power.”

Macale says this fear helped lead to the creation of the country’s Cybercrime Prevention Act of 2012. This act extended the criminalization of libel online. The law not only extended the criminalization of libel to online speech, it also created higher penalties for online libel than that in print and broadcast. Macale says there is reason for people to be cautious of expressing opinions online.

“Here under the law the interpretation is so loose that one can argue that even just by liking a post or even retweeting…a certain possibly defamatory post can be considered as aiding and abetting libel,” he says.

Further, as in the U.S., most Filipinos still use the Internet primarily for entertainment, though Macale is optimistic about the future for interactive news.

“I think there is a growing minority of Internet users there that are growing day by day who are very diligent, who are very critical,” he says. “I can see in the next years to come in the growing influence of online media as a very powerful and critical force in shaping public policy and shaping the public’s perception on the issues.”

For Rappler, the key will be to move fast enough to keep pace with how young people use the Internet without alienating older, more traditional news consumers. So far, it’s been able to navigate that line–and double its revenue from the year previous. “We can’t be too avant-garde so that we are not considered news,” says Ressa, the site’s founder. “And we can’t be too traditional that we can’t capture youth.”