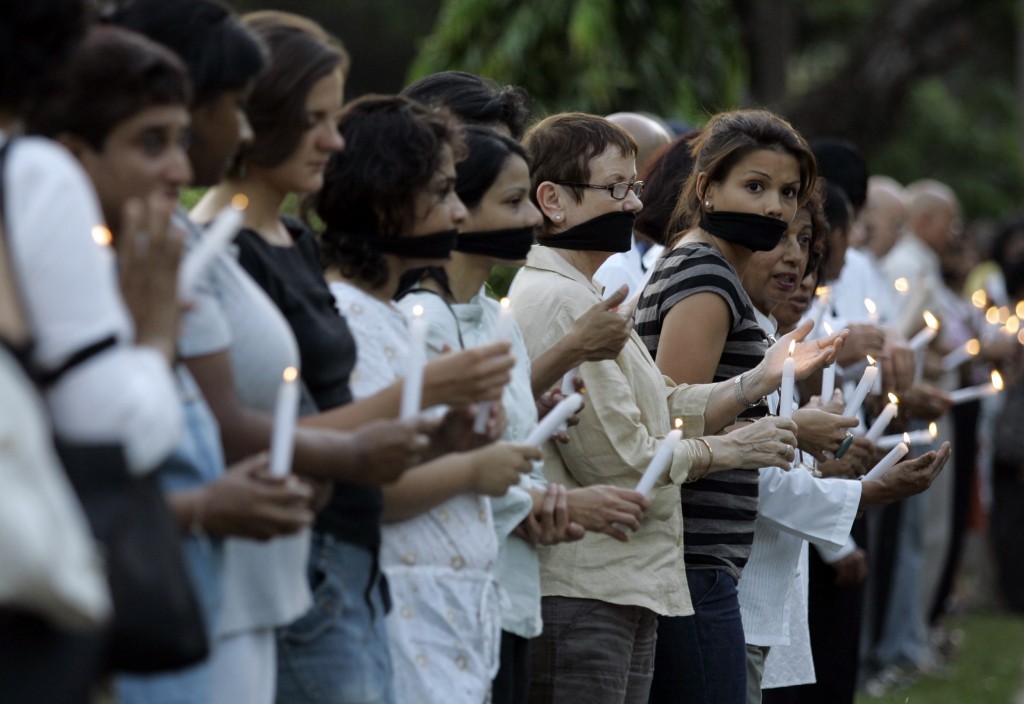 Frederica Jansz surely knew that one day Sri Lanka's government might force her out. After all, she became editor of the South Asian nation's Sunday Leader newspaper only after her predecessor, Lasantha Wickrematunge, was murdered in broad daylight in 2009. The killing came after the paper published a series of articles on corruption. In Wickrematunge's final article, he wrote "...when finally I am killed, it will be the government that kills me." Soon after taking the top job at the newspaper, Jansz received a letter in red ink from someone threatening to "chop you up," she told London's Telegraph newspaper. It was similar to a letter Wickrematunge received just weeks before his death.

Jansz had joined the newspaper in 1994. While she worked there, its office was attacked nine times and set on fire twice. Jansz persevered, and made a name for herself as a reporter covering the Sri Lankan government's 26-year civil war against the Tamil Tigers. Soon after becoming the newspaper's editor in 2009, Jansz published an article reporting that the Sri Lankan military had shot and killed three senior Tiger leaders and their families as they were trying to surrender--apparently on orders from the government.

And yet it was not this article, but one about the defense minister and a dog that forced her from the country. Shortly after that article, detailed below, the Sunday Leader was purchased by an ally of the Sri Lankan government and Jansz was fired. But the threats against her continued.

“I felt that it would not stop," says Jansz, in an interview with Global Journalist. "I think [there] was a good possibility that they would murder me as they had murdered Lasantha...I am a mom and I had two sons, so I just figured it was the time to leave.”

Now 48, Jansz lives in Washington state and is studying interior design. She spoke with Global Journalist's Jinghong Chen about covering war crimes, filling the shoes of a boss who was murdered for his work and restarting life in a new country with a new profession.

GJ: What was it like to work as a journalist in Sri Lanka?

Jansz: It was challenging at all times. During my career as a journalist in Sri Lanka, I covered the civil war extensively. The war was finally concluded in 2009, without any credible witnesses [to the Tamil’s defeat], as the government forced out all media personnel from the war zone… As a result, conflicting reports allege that serious war crimes were committed.

And apart from that, it was all the government corruption. I think it finally came to a point that, it is not about the individual; it is just that the whole system is so corrupt.

I started to write for The Sunday Leader as far back as 1994. We were…very much the voice for the voiceless and the minorities. And the paper paid a huge price. Lasantha was murdered in 2009 as he drove to work. Then I took over, and the threats did not stop. Finally in 2012, I was sacked by the government by using a government stooge.

But they did not stop; they were going to file court cases against me despite the fact that I was no longer [an editor], and then I was followed by men on motorbikes. I figured it was time for me to stop playing a heroine, and be a mom, because I had two sons. So we left.

GJ: How could the government fire you?

Jansz: Because of the kind of journalism that we were practicing, none of the state entities would advertise with the newspaper, which took off 60 percent of our revenue. So the paper was struggling for years.

The newspaper had approached a local businessman to help put the newspaper on the stock market, to make it go public in an endeavor to increase revenue while still maintaining its independence.

However, the government on hearing about the negotiations did a back door deal with the businessman where they ended up funding him to buy out the publisher and owner of The Sunday Leader and so, thereby ended private ownership and the independent stance of The Sunday Leader.

GJ: Is there a specific story that go you in trouble?

Jansz: In 2012, I heard that Sri Lanka’s defense secretary, Gotabaya Rajapaksa, was trying to fly a puppy dog from Switzerland for his wife.

He had a pilot friend who flew for the Sri Lankan Airlines and wanted him to fly to Switzerland to bring down this puppy dog.

Yet this pilot was only qualified to fly the smaller bodied A330 but not the A340, which is the plane usually used to fly from Sri Lanka to Zurich in Switzerland. So just to accommodate [the pilot who was to get the dog], they switched the planes. Fifty-nine passengers were to be off loaded.

I called the defense secretary, and he just went berserk and he [verbally] abused me. Then I wrote a story and published the entire conversation. This caused a huge controversy. He was contacted by all the newspapers, including international news agencies. He did not want to forgive me for that public embarrassment and humiliation…[this] pushed them to give funds to this so-called investor to buy the newspaper and tell him to get rid of me.

GJ: How did you manage to flee Sri Lanka?

Jansz: In 2009, the American ambassador called me because I had worked on a big story about the same man—the defense secretary—and I had received a lot of threats during that time. She…told me that they felt that my life would soon be in threat, and offered me a multiple entry visa to the U.S., for my two children and myself. I was frankly shocked and amazed, but I told her at that time that…I had no intention of leaving ever. But she asked me to keep it as a safety measure, so I did. Those visas were valid until 2015.

In 2012, when I was in trouble with them again, and when I was sacked and knew that I would go to jail, these visas were all I had. So I contacted the ambassador again, and told them that I was planning on using [the visas]. They helped me to get out. That was the only option we had at the time.

GJ: When you first arrived in America, how did you feel?

Jansz: I felt lost. I was so traumatized and confused. We did not know what the future would be like. I had no family, no friends, nobody, and I was totally alone. It was a nightmare. And it took nearly two years for us to settle, to find work, to find school for my children….In fact, there were many times that I just wish that I could go home. And frankly, I still would like to go home. It just is that I had nothing to go back to any more. I have to make a life here in America.

GJ: Are you still working as a journalist?

Jansz: I work as an interior designer in a company in Seattle.…I am certainly not a practicing and active journalist any more. I guess my career as a journalist is over.

Journalism is my passion and when I first came to America, I just felt totally drained and I figured that I would not do it again. But for me, [journalism] was never just a job. It was a passion for me. Even now, when I sit down to write, I cannot stop. I guess it is always there. It just is not a viable source of income for me any more in this country. So I went back to school to get another skill and follow another career path.

GJ: How do you perceive your future?

Jansz: I have to admit that right now my future seems so daunting. Here I am a single parent with two children. The future… in fact, is frightening. Because I keep thinking that it took me 20 years to reach the top in journalism in Sri Lanka, and I do not have another 20 years to reach the top as an interior designer in this country. So I need to get there faster, and I can only hope that America, being the land of opportunity, I will get there faster. The children have a great future. They are young enough and they have the time. But as for me, it is frightening.