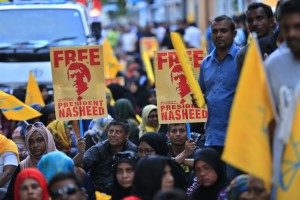 In this Friday, March 13, 2015 photo, supporters of former president of Maldives Mohamed Nasheed hold placards and participate in a rally calling for his release in Male', Maldives. Nasheed was convicted and sentenced to 13 years in prison after a quick and disputed trial that raised fears of more instability in the Indian Ocean nation. Nasheed's defense lawyers pulled out of the case in the middle of the trial, accusing the court of rushing the hearings and not allowing them enough time to prepare. (AP Photo/Sinan Hussain)