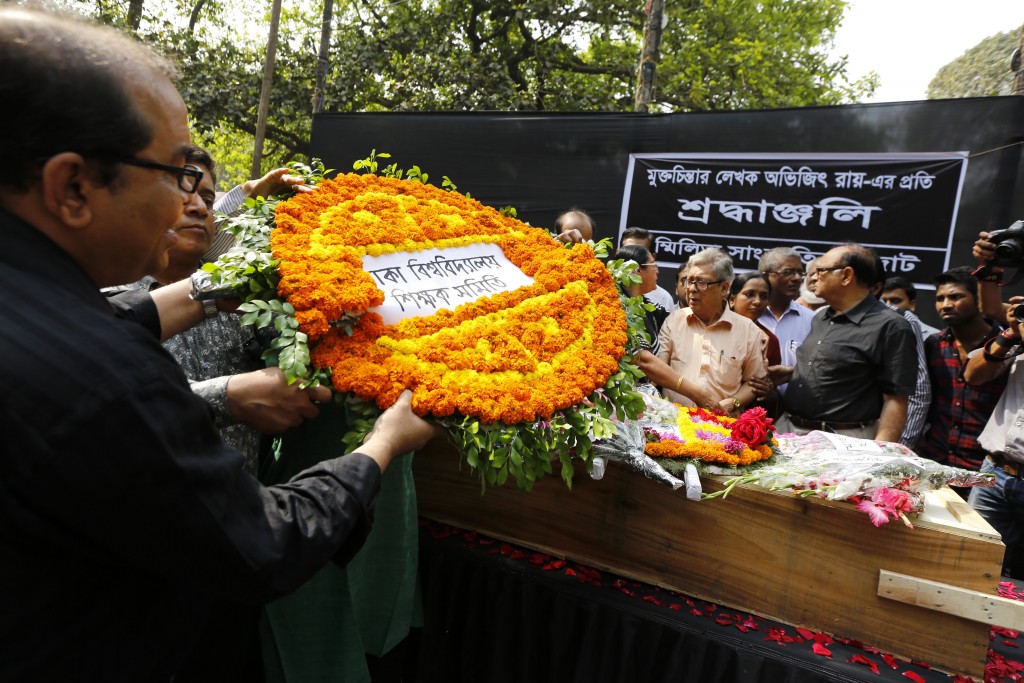 A blogger and writer who was critical of Islamic extremists has died after being attacked by men with meat cleavers on the streets of the Bangladeshi capital Dhaka.

Avijit Roy was leaving a book fair at Dhaka University with his wife, Rafida Ahmed,  on the night of Feb. 26 when a group of men approached them. At least two of the men attacked them with meat cleavers, Ahmed told reporters from the Dhaka Tribune.

Roy was taken to a hospital after the attack and died soon afterwards. Ahmed, who is also a blogger, was injured in the attack. The couple had been in Dhaka for the release of Roy's recently published books "Biswasher Virus" [Virus of Faith] and "Sunyo theke Mahabiswa" [From Vacuum to the Universe] at the book fair.

On March 2, police arrested a suspect, Farabi Shariur Rahman, for the killing, news outlets said. Roy had expressed particular concern about threats from Shafiur, an individual he believed to be linked to an Islamic political organization called Jamaat-e-Islami, according to the International Humanist and Ethical Union.

An obscure militant group in the country, Ansar Bangla 7, claimed responsibility for the attack. “Anti-Islamic blogger US-Bengali citizen Avijit Roy is assassinated in capital #Dhaka due to his crime against #Islam,” said a tweet from the group, according to the Wall Street Journal.

Roy's blog Mukto-mona [Free Mind] included his essays criticizing religious fundamentalism. In an essay titled "Does the Qu'ran have any scientific miracles?" he described the blog as "an Internet congregation of secularists, atheists, agnostics, freethinkers, rationalists, skeptics and humanists of Bengali origin."

Another Bangladeshi blogger, Asif Mohiuddin, was stabbed in January 2013, but he survived the attack. He was arrested in April 2013 for posting “anti-religious” comments on his blog, according to Reporters Without Borders.

Previously, the Jamaat-e-Islami had been banned from politics in 1971 by then-president, Sheikh Mujibur Rahman. In 1978, then-president Ziaur Rahman allowed Jamaat back into the political arena. In 2013, the high court in Bangladesh ruled the party unfit to contest in national polls. However, it can continue to partake in other political activities.

Jamaat denied being involved in Roy’s death and issued a statement calling for an investigation into his killing.