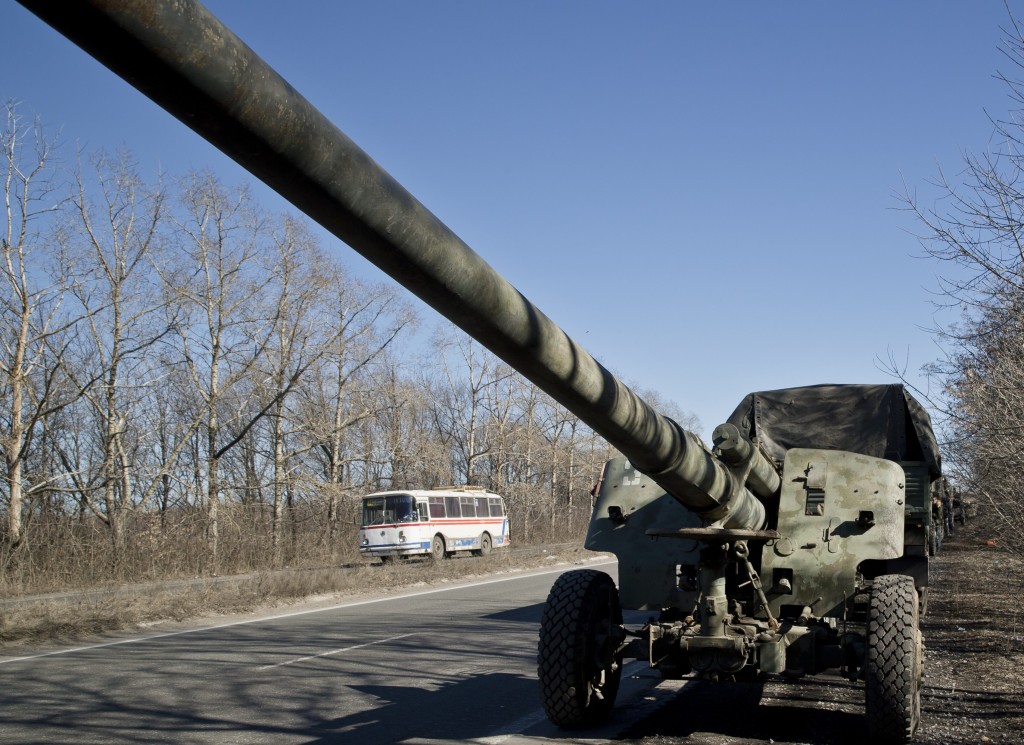 A bus drives by a convoy transporting artillery pieces, outside the city of Donetsk, Ukraine, Feb. 24, 2015. Howitzers were seen moving east that day from the largest rebel-held city in eastern Ukraine further into separatist-controlled territory. (AP Photo/Vadim Ghirda)

A Ukrainian photojournalist was killed after in an artillery strike in eastern Ukraine amidst fighting that continues despite a ceasefire agreed to by Russia, Ukraine and pro-Russian forces Feb. 13.

Serhiy Nikolayev, a photographer at the Kiev-based newspaper Segodnya, died Feb. 28 in shelling near the town of Pesky, northwest of the eastern city of Donetsk, international news outlets  reported.

The 43-year-old was injured in the attack and then taken to a military hospital in Krasnoarmiysk, 30 miles (48 km) west of Pesky, where he died from his wounds, the Associated Press said, citing Kateryna Perepelitsa, editor of the paper. Nikolayev was not in Pesky for a reporting assignment with Segodnya, Pereplitsa told the AP, without commenting further on his reasons for being there. Ukrainian media outlets rarely send reporters to the east to cover the conflict, but many reporters go there as freelancers for their outlets or other media organizations.

Nikolayev reported on several armed conflicts, including wars in Georgia, Libya, Syria and Somalia, the English-language newspaper Kyiv Post said. At least six journalists and two media workers have been killed in Ukraine since 2014, according to the Committee to Protect Journalists. Nikolayev is the first journalist to be killed in the Donetsk region since the Aug. 6 death of Andrei Stenin, a Russian photojournalist.