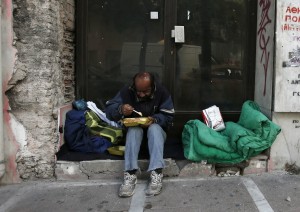 A homeless person eats his meal at the entrance of a closed shop as the graffiti reads with red letters ''Athens anti-fascism city'' and in black ''Fight, resist, don't whine'' in Athens on Thursday, Oct. 17, 2013. Thursday, is the International Day for the Eradication of Poverty and municipal authorities in the Greek capital reported a sharp rise over the past year in the number of people relying charity meals. The last three years cuts by Greek governments, as part of country's euro240 billion ($325 billion) bailout agreements, are meant to reduce debt, but have hurt the economy and pushed the unemployment rate to nearly 28 percent. (AP Photo/Thanassis Stavrakis)