Interview: Greece under the far-left 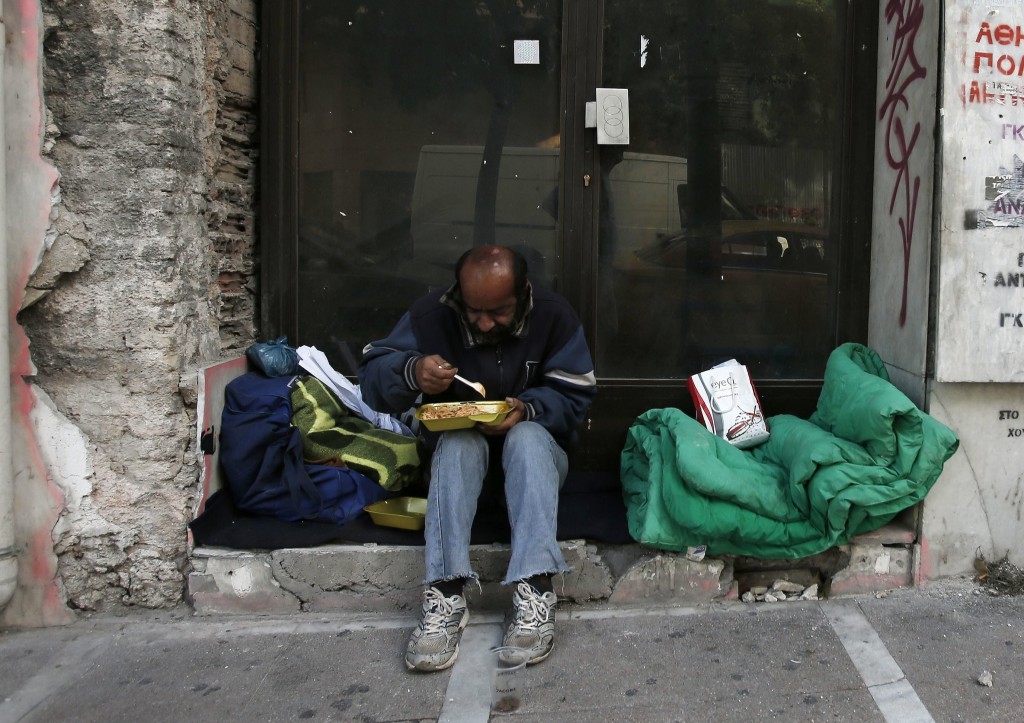 A homeless person eats his meal at the entrance of a closed shop as the graffiti reads with red letters ''Athens anti-fascism city'' and in black ''Fight, resist, don't whine'' in Athens on Oct. 17, 2013. (AP Photo/Thanassis Stavrakis)

Greek journalist Michael Nevradakis launched Dialogos Media in 2010 as a student at the University of Texas as his home country was in the midst of an economic collapse rivaling that of the 1930s. Since then the weekly radio program he hosts featuring interviews with leading Greek and international figures has expanded to 17 stations across five countries. Online, the Dialogos weekly column now appears periodically in the Huffington Post, TruthOut and the Daily Kos, and its Internet radio stream, Dialogos 24/7, broadcasts music and programming around the clock.

Following the victory of the far-left Syriza party in Greek elections in January, Nevradakis spoke with Global Journalist's Lucrezia Lozza about the new government's efforts to persuade Germany to ease Greece's debt load, the effect of austerity on Greeks and whether Syriza is here to stay.

Global Journalist: How do you think Greece will change under Syriza? Will the new prime minister, Alexis Tsipras, really be able to keep his promises to end corruption and take on the country's wealthy oligarchs?

Nevradakis: Whether or not these promises will be kept by Syriza, will depend on a lot of things. Governments in the past when they were elected made promises that they would go after corruption, the power of oligarchs, tax evasion. That hasn't really happened...because there are certain people in the country that are so powerful. They have interests in the biggest media outlets...but they also have major interests in construction companies, public works projects, insurance, oil and gas and many other [industries]. Governments are afraid to go after them because they have control of the media.

So any move by Syriza against them will probably result in very negative publicity...My sense is that in looking at what Syriza has been doing in the first two weeks, it wants to act carefully. Essentially, I think the oligarchy will go against them and I think they will not make big changes. They might go after a few taxation changes, a few instances against the corruption, but I don't think they will go after all of it. I think there's a political cost involved, and given the actual political circumstances, it's very difficult for them. GJ: Do you think Syriza has true, long-term political support? Or do you think it won only because people were so sick of the economic situation?

Nevradakis: There's a combination of both. People didn't vote for Syriza because they were persuaded by its promises, because they are used to promises from politicians before elections. I think it was more a message to get rid of the two parties that governed Greece for the past 40 years. Most people want these parties to go away, and...Syriza was the party that was the best option. [On the other hand] a lot of people who lean left didn't want Syriza coming into power, and voted for [the conservative party] New Democracy as the No. 2 in the hope of preventing Syriza from coming to power. If Syriza doesn't deliver, if the economic situation for ordinary people continues to be very difficult, if they see there's still no jobs, no prospects, then it might be very easy for some of those voters to turn against Syriza. It's a party that not long ago got 4 to 5 percent at elections, so it might be  easy to lose supporters if things continue not to improve.

GJ: What do you make of Prime Minister Tsipras and the finance minister's visits to other European leaders in recent days to try to get a new debt deal?

Nevradakis: What they are trying to do is build a coalition that would sort of pressure Germany, the ECB [European Central Bank] and the [IMF and European Council] to budge on their position. What they are thinking is if they somehow get some political allies in other countries they might have an easier time going to the negotiating table and say: "Look there's other people that support us and they would like to see the situation change not just for Greece but across the European Union."

GJ: Greece's Finance Minister Yanis Varoufakis and his German counterpart Wolfgang Schaeuble recently met and they basically agreed to disagree. Why do you think the German government is not more sympathetic? Nevradakis: Germany has held a very hard line all throughout the financial crisis in Europe and Greece. Germany has some internal reasons for maintaining the status quo: their economy has benefited from the situation, has developed in the past few years. German exports have dominated the European marketplace, and in particular those in Greece and other southern European countries.

Germany has its own political reasons, the government doesn't want to go back to its voters and say that they are making a new agreement with Greece that is not that beneficial to Germany. It's not so much about the situation for the Greek people but more about the message that [is] transmitted to German citizens and citizens from other countries.

GJ: What have been the effects on ordinary people in Greece of the budget cuts imposed by lenders?

Nevradakis: I've been in Greece for the past two years so I've seen firsthand. The impacts have been disastrous for most people. Incomes have come down an average of 45 percent, pensions have been cut and in many cases are around 300 to 400 euros [$342 to $456 per month], which is a very small amount of money considering the cost of living in Greece has not come down very much. Taxes have gone up: the tax on basic necessities like clothes and medicines is 23 percent.

The tax on heating oil is so, durin gthe cold months right now lots of people don't have heating. They buy poor furniture and whatever they can find to burn to keep themselves warm, and this creates this nasty smog in Athens. You can smell the burning. This is in your face and [shows] that people are literally suffering. Another big problem is young people, well-educated, who decide to go away and they probably will never come back. The youngest and most productive people are leaving the country at their most productive age. Greece is essentially losing a generation.