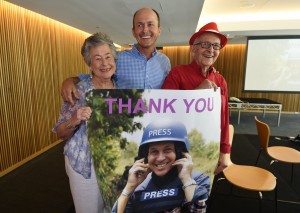 The family of Australian journalist Peter Greste (L-R) mother Lois, brother Andrew and father Juris, pose in celebration with a picture of Peter Greste during a press conference in Brisbane, Australia, 02 February 2015. Al Jazeera journalist Peter Greste was released from a Cairo jail on 01 February 2015, and deported after 400 days in jail on charges of faked reporting and collaborating with the banned Muslim Brotherhood. The veteran television reporter was driven to Cairo Airport in the afternoon and put on a flight for Cyprus. In Australia, government officials confirmed he was on his way home and welcomed his unconditional release from what it said was detention for political reasons. (EPA/Dan Peled)