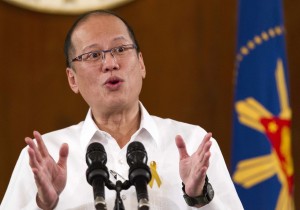 epa04590606 Philippine President Benigno Aquino III delivers his speech in a televised address regarding the killing of 44 police officers in a clash in southern Philippines inside the Malacanang Presidential Palace in Manila, Philippines, 28 January 2015. Philippine President Benigno Aquino warns against delaying the passage of a law that would implement a peace deal with Muslim rebels amid anger over the killing of 44 police officers in a clash on the weekend. Aquino says the peace process with the Moro Islamic Liberation Front (MILF), whose members allegedly clashed with the policemen on 25 January, must be pursued to ensure that violence in the southern region of Mindanao does not worsen. EPA/RITCHIE B. TONGO