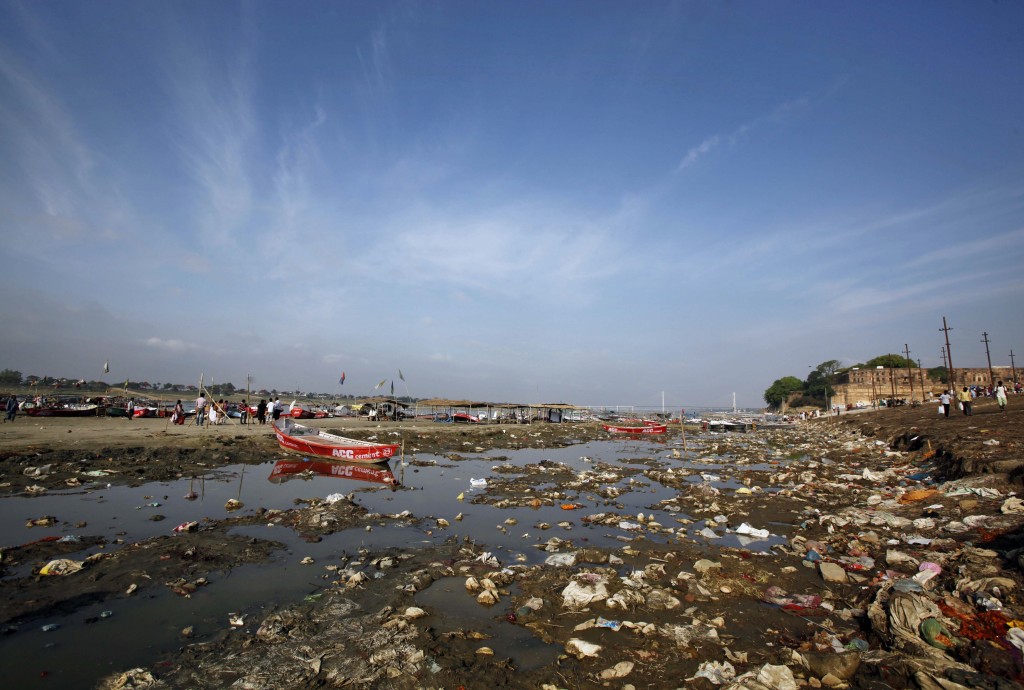 The Ganges is both sacred and polluted.

Taking a dip in the Ganges River is a lifelong ambition for many Hindus. But Sudha Ramachandran, an India-based freelance journalist, says she wouldn’t even put her finger in the holy river.

“The steps to the river itself are absolutely filthy,” she says, in an interview with Global Journalist. “There’s human excrete everywhere, cattle excrete and there are even parts where people are burning bodies.” About 450 million people live along the banks of India’s longest river. Many of those along its 1,569 mile (2,525 km) course depend on its waters for drinking, bathing and industry. Hindus also regard the river as a Mother figure that purifies the human body and soul. Hundreds of thousands of pilgrims flock to the temple city of Varanasi along the Ganges’ banks to bathe in the river each year. Many are ill and near death, as some Hindus believe that dying in Varanasi brings salvation.

“For many people, it’s a matter of faith,” says Ramachandran. “Many of the people…may not even be aware that the river is poisonous and will affect their health.”

The biggest culprit is domestic sewage. According to Indian government figures compiled by the Centre for Science and Environment, an advocacy group based in New Delhi, 2.7 million liters per day of sewage is generated by the 50 cities along its banks. According to a 2013 report from India’s Central Pollution Control Board, fecal coliform levels in some downstream stretches of the river in West Bengal are more than 100 times higher than the maximum permissible levels for even bathing.

The same agency categorizes 764 “grossly polluted” factories, including chemical plants, slaughterhouses and textile factories. Additionally, the loss of freshwater flow into the river from hydroelectric dams and agricultural irrigation means that some stretches of the river receive no freshwater flow during winter and summer months – only wastewater. That situation, according to a recent report from the Centre for Science and Environment, turns stretches of the river into a sewer.

Depressingly, though India’s government launched its first major initiative to clean the river, the Ganga Action Plan, in 1986, the river has only gotten dirtier. “What is worrying is that in all the stretches, pollution is getting worse,” says a recent report form the Centre for Science and Environment. “This is not surprising given that all along this heavily populated stretch, freshwater intake from the river is increasing. In this way, water is drawn for agriculture, industry and cities but what is returned is only waste.” Sewage treatment plants have been built in cities all along the river, but many don’t operate at full capacity because of a lack of electricity. Another problem is India’s decentralized approach to governance.

“The Ganga was declared as the national river in 2008, [but] it is controlled and managed by five different states, all of which have their own legislation,” says Brahma Dutt Tripathi, a professor of environmental engineering at the Banaras Hindu University and an expert member of the National Ganges River Basin Authority. “If [the] Ganga comes under the direct control of the central government it could implement all of the programs more effectively.”

India’s new prime minister, Narendra Modi, made cleaning up the Ganges a key part of his election campaign. Since taking power last year, he’s launched the Namami Gange” initiative (Namaami means ‘obesiance’ in Sanskrit) with a focus on treating sewage and halting industrial pollution of the river. Whether that $326 million (20.4 billion rupee) plan will succeed where others have failed–or alleviate the problems of freshwater flow–remains to be seen. Shripad Darmadhikary, the founder of Manthan Adhyayan Kendra, a center that monitors, analyzes and researches water and energy issues, says that there also needs to be bottom-up approach to get greater involvement of people who live along the Ganges in cleaning it. “The way to rejuvenate the river is through human interventions,” he says. “The river needs to be treated as a living, biological, ecological, and cultural entity.”

Ramchandran, the journalist, agrees that cleaning the river has to be sustained over time—and that will require changes in how people who live in the Ganges basin think about the river.

“They need to recognize that they have a role to play in keeping this river clean,” she says. “Spreading awareness to get people thinking about it is something much larger than just setting aside money.”