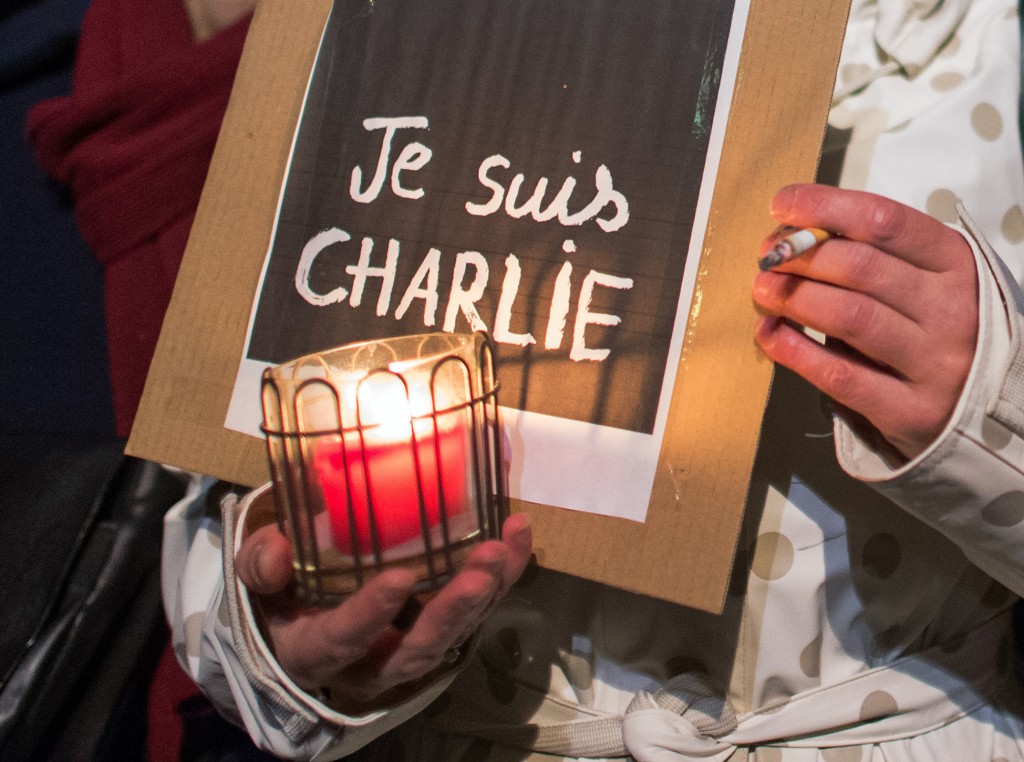 At 11:58 a.m. on Jan. 7, the Twitter account of the French satirical newspaper Charlie Hebdo published a cartoon depicting Abu Bakr al-Baghdadi, the leader of the Islamic State in the Levant, wishing people health in the New Year.

About 10 minutes later, the cartoonist Honoré who had produced the drawing, was dead along with 11 other people after an attack on Charlie Hebdo's office in Paris by three armed men. Masked gunman run towards a victim of their gun fire outside the French satirical newspaper Charlie Hebdo's office, in Paris, Jan. 7, 2015. (AP Photo)

Among the dead were a policeman, the cartoonists Cabu, Wolinski, Tignous and the newspaper's editor, Stephane Charbonnier. Twelve others were injured. Part of the attack was captured on video by a person in a building across the street:

One of the attackers turned himself into police Jan. 8. The other two are the subject of a massive manhunt. One of the suspects,  Cherif Kouachi, had previously spent three years in a French jail for recruiting people to fight with Islamist groups in Iraq, according to Bloomberg News.

Charlie Hebdo appears to have been targeted for the newspaper's satirical depictions of the Prophet Mohammad and Islam. The newspaper was known for its provocative images, including a cartoon of the Prophet with a bomb in his turban–though it has also lampooned Jews and Christians as well.

This was not the first time Charlie Hebdo had been targeted by extremists. In November 2011, its offices were firebombed a day after it released an issue it said was 'guest-edited' by the Prophet Mohammed.  Charlie Hebdo responded in characteristic fashion, with a cover picture of a Muslim man smooching a cartoonist with the title: "Love is stronger than hatred."

That attack and the newspaper's persistence in caricaturing the Prophet led the French government to post police protection in front of the newspaper's building. In March 2013, Inspire, the English-language magazine published by al-Qaida in the Arabian Peninsula, listed Charbonnier on a hit list under the heading "Wanted: Dead or Alive for crimes against Islam." Other figures included outspoken critics of extremism such as Salman Rushdie and Ayaan Hirsi Ali. The attack was condemned in France by political leaders of all parties. Yet many are watching to see if it will fuel support for anti-immigrant and far-right parties. Shortly after the attack, Nicolas Dupont-Aignan, head of the far-right Debout la République (Arise the Republic), called for the suspension of the Schengen treaty that opened borders between European countries.

The attack drew condemnation from the Arab League and from the head of Egypt's Al-Azhar mosque. It also inspired a Twitter campaign, #JeSuisCharlie:

What a tremendous loss. A free press is our greatest weapon against tyranny, home and abroad. #JeSuisCharlie pic.twitter.com/QTytTkGT4b — Mark Ruffalo (@MarkRuffalo) January 7, 2015

It also led to vigils across France and Europe: Thousands of people gather for a moment of silence to pay their respects to the victims of the deadly attack at the Paris offices of French satirical newspaper Charlie Hebdo, in Lyon, central France, Jan. 7, 2015. (AP Photo/Laurent Cipriani)